The men, aged between 19 and 33-years-old, were convicted for causing public nuisance after being filmed pulling dangerous stunts on their motorbikes 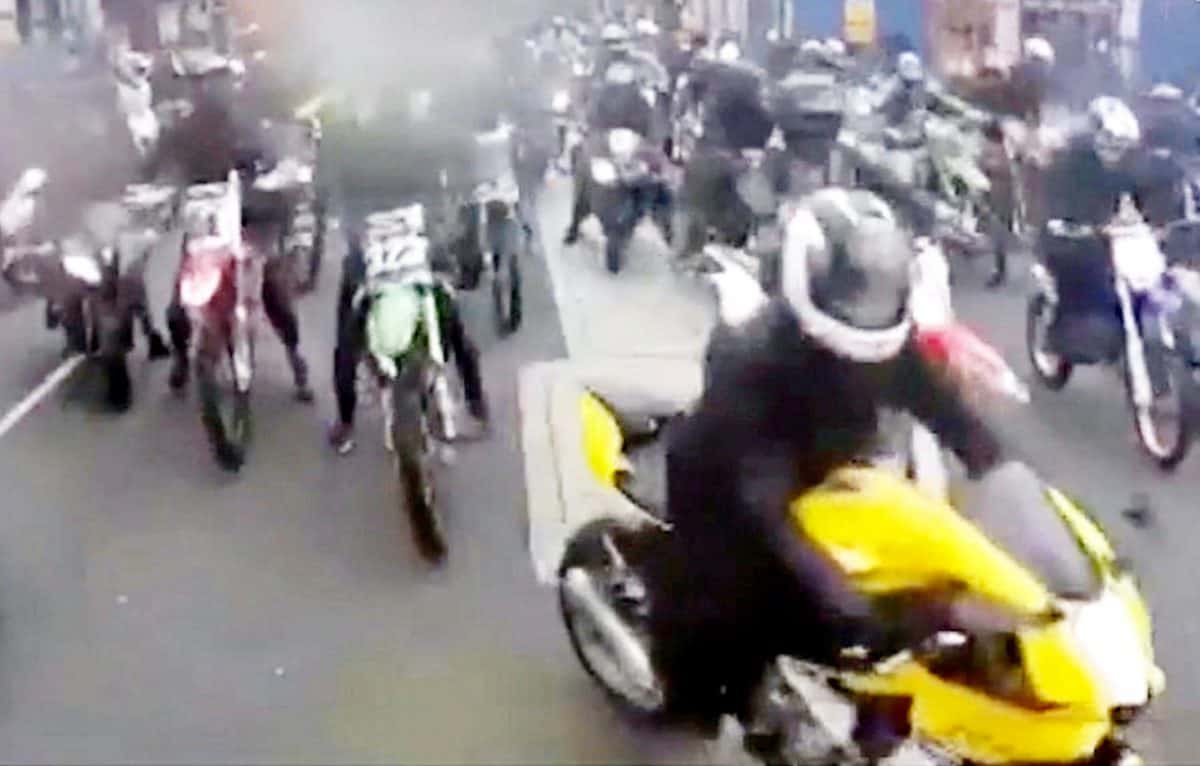 A biker gang who terrorised residents after going on the rampage during an illegal “ride out” have been convicted in Britain’s largest ever prosecution for anti-social biking.

The group of louts caused chaos after they took to the streets of Birmingham on scramblers, quad-bikes and mopeds for the lawless bike rally on June 26, 2016.

Ringleader Andrew “Dru” Tomlinson, 29, was caught after he filmed footage which was later boastfully uploaded to social media channels.

The video shows the men causing havoc by driving at speed and pulling dangerous wheelies along residential roads.

Cameras on board a police helicopter also filmed them running red lights, churning up parkland, driving over large grassed roundabouts and weaving between cars.

Today (Fri) Tomlinson, of Hodge Hill, Birmingham, was jailed for two years alongside Matthew Sidwell, 30, of Chelmsley Wood, Birmingham, who was caged for a year.

A total of 26 other men, aged between 19 and 33, were given suspended prison sentences and community orders at Birmingham Crown Court.

They were all convicted for causing a public nuisance in what is believed to be the largest ever such group prosecution for anti-social biking.

West Midlands Police are now now warning people that the force will not tolerate drivers who use the streets as race tracks.

Chief Superintendent Dave Sturman, said: “There is no justification for this type of behaviour: they risk serious injury to themselves, other road users and members of the public.

“We have footage from this and other ‘ride outs’ showing bikers ramping up kerbs and speeding along pavements close to pedestrians − including a line of school children − and it’s scary to think of the injuries they could inflict.

“They acted as though they owned the road: holding up traffic and aggressively surrounding motorists who didn’t obey their commands.

“We hear bikers saying ‘we’re just having fun’ − but if these riders are law-abiding why do they wear face coverings and masks and ride around with no registration plates? It’s because they know they are doing wrong and are trying to stay anonymous.

“However, this operation shows that we will find and prosecute offenders.

“For them it means a criminal record, fines or a community order and the risk of a prison sentence…plus we’ll seize their bike and destroy it.

“We are now much more experienced in going after these types of offenders. We will use tyre-deflating stinger devices to contain groups of illegal bikers that pose a danger to road users and to disable their motorbikes bikes.

“And some officers are now equipped with a DNA spray which they can use to ‘tag’ offenders and their bikes.

“This is an invisible liquid, each can with its own unique DNA, which shows up under UV light − so should we seize the offender’s bike or clothing in future we can link it to a specific incident and provides great evidence.

“The public have told us they are fed up of bikers who behave in this way and who risk causing serious road collisions − and we are determined to rid them from the streets of the West Midlands.”

Tomlinson had led the group from a rendezvous point in Stechford, Birmingham at around 1pm before setting off on their Take Back the Streets” ride-out

Police were inundated with complaints from members of the public and launched an investigation, trawling through social media and police video footage.

Investigators made dozens of arrests, seized more than 20 off-road bikes and charged 48 men with causing a public nuisance, with 28 being convicted this week.

All but one of the men admitted the charge, with only Jack Bentley, 24, of Castle Bromwich, Birmingham, denying the offence.

But footage showed him among a massed rank of riders causing carnage in Broad Street in Birmingham city centre and at another point is seen riding along a footpath.

He was found guilty by a jury and given an eight-month suspended prison sentence and ordered to carry or 50 hours of unpaid work in the community.

The other men convicted men are:

• Kenny Nguyen (22) from Willow Drive, Handsworth, and Michael Morton (26) from Dulverton Road, Leicester, both given 18-month suspended jail terms and ordered to carry out 200 hours of unpaid community work

• Lewis Smith (19) from Nightingale Avenue, Smiths Wood, was given a 12-month community order including 75 hours of unpaid work.

• Daniel Draper (27) from Bringewood Grove, Bartley Green, was given a 12-month community order including a 15-day rehabilitation course.

Samuel Ward and Shaqeel Karim will be sentenced separately on March 29; another 19 men were charged but were found not guilty.