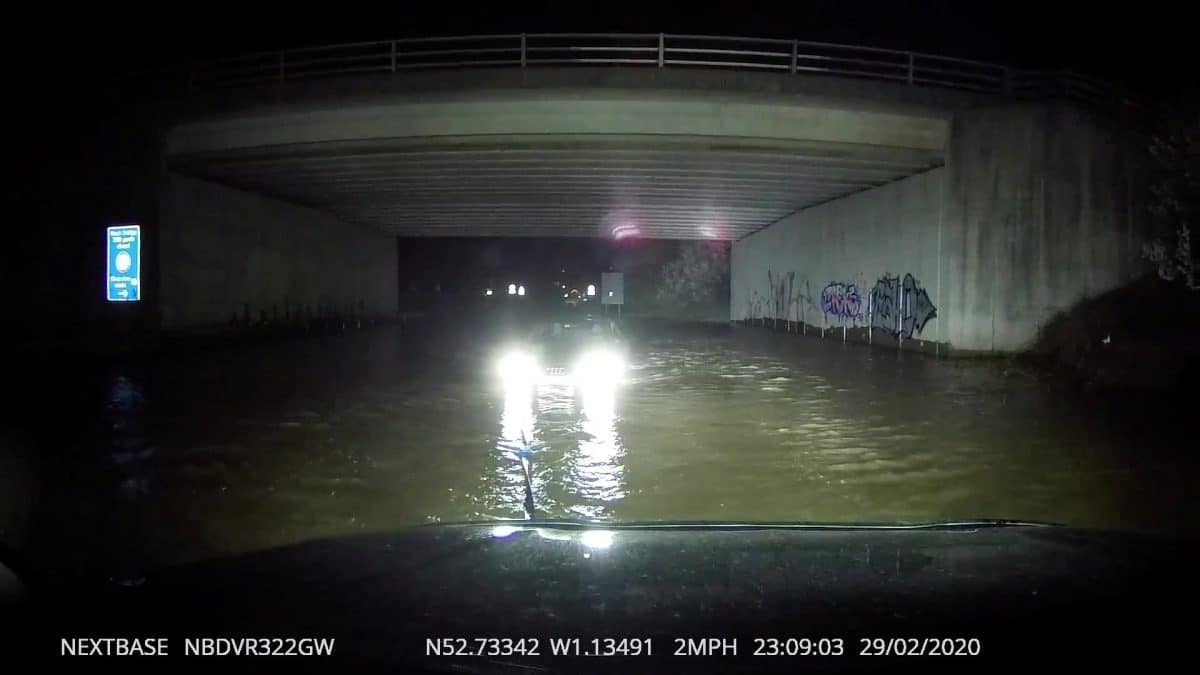 This is the moment a £30k Audi had to be dragged out of sewage water – after apparently driving through flood despite warnings.

An officer from the local Leicestershire & Rutland 4×4 Response Team had to tow out the pricy motor as it became stuck.

The driver claimed he “did not see” signs that pointed out the authorities had closed Mountsorrel Lane in Sileby, Leics.

He drove straight through two feet of floodwater, with sewage waste mixed in to boot.

This incident, which happened last Saturday night (29/02) came on the back of Storm’s Chiara and Dennis which has submerged huge areas of the UK.

Nigel Spencer, Media Officer for the volunteer team which helped the driver, said: “We support emergency services in floods and our role was to patrol the floods and assist the flood wardens.

“The roads around where the Audi was recovered is unfortunately on a flood plain so it is common.

“Signs get put up and for whatever reason, some people are taking the site’s down and throwing them away.

“One is that people are doing it because they do recovery work and charge for it.

“They deliberately do it to get vehicles stuck and there is quite a bit of evidence that could be happening.

“Then there’s other people that have got bigger vehicles that don’t like the fact they can’t get through.”

The motorist was not only freezing cold and covered in mucky water, but his expensive Audi was totally ruined as well.

Nigel continued: “The driver came down the slip road and said the signs weren’t there although they have been there.

“The signs have been moved again, but as you come off the dual carriageway above, unfortunately, you end up going into a dip filled with water.

“It was quite deep and modern cars don’t need an awful lot of depth, because a lot of people don’t realise the air intakes on a lot of cars are down by the foglight.

“So even if the water is only a few inches deep, if you start to push water in front of the car it immediately gets pushed into the air intake.

“As soon as it gets into the engine, it just destroys it as it can’t compress water.

“So as soon as it goes inside the pistons, it basically bends everything in the engine. So the engine is now a write-off and that can pretty quickly write the whole car off.

“If it gets into the vehicle it is a write off as well because all the interior is destroyed. You don’t need much water to get in because of the electronics involved.

“If you take a motor vehicle, into flooded water, it a disaster if any gets into the car in any way shape or form.

“He was genuinely apologetic about it. We don’t cast aspersions. At the end of the day, I don’t really care about who we have to help.

“People make mistakes, but the ones that really annoy us is the ones that totally ignore signs and warnings. They just ignore it, driving in and then they get themselves stuck.”

The group are imploring drivers not to take risks and hope this incident can serve as an example to those who think they can drive through flood water.

“If there’s a flood warning out and you leave your vehicle parked on the road, they might not pay out if it just happens overnight.

“From a safety aspect, it is serious when you choose to drive into water, especially moving waters, as you have no idea what’s in there.

“You could have manholes that are displaced and all sorts of debris. It’s not worth risking it.

“You can go into a ditch or something that you can’t see because it’s obviously very difficult to judge the road. There’s a severe risk of getting washed off the road into deeper water.”