The pair were spotted around Old Green Roundabout, in Newport, south Wales, just before 10am yesterday morning 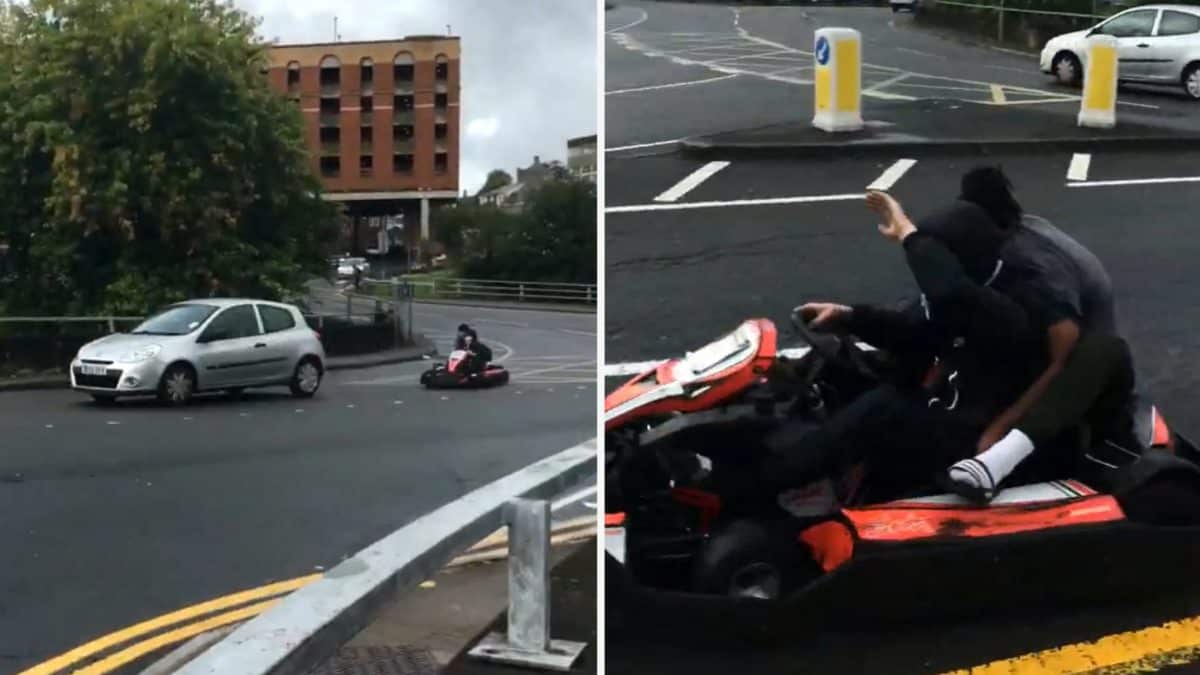 This is the heartstopping moment two teenagers were caught darting through morning traffic on a GO-KART.

Footage shows the two teens speeding round a city centre roundabout before weaving themselves in between traffic.

The pair were spotted around Old Green Roundabout, in Newport, south Wales, just before 10am yesterday morning.

The red and black go-kart has since been seized by police, who are currently trying to track down the driver and passenger.

Eyewitness Darran Ward, 43, said: “I was on my way to work to work with the dogs when I heard this pretty interesting noise.

“I’m a keen motorbike enthusiast so I instinctively got my phone out when I heard it.

“Then low and behold I saw this go-kart zip through the traffic by these two teenagers.

“I honestly just found it hilarious.

“It’s the most Newport thing I have seen in a long time. It’s getting more Mad Max post-apocalyptic by the day.

“I didn’t film it with the intention of getting anyone in trouble.

“They were actually quite good. I think they should take it up competitively.”

Gwent Police Area Support Unit Sergeant, Shane Draper said: “Gwent Police today received a report regarding the use of a go kart on a busy road, we have since been made aware of this video in circulation, believed to have been taken sometime this week on the Old Green Roundabout in Newport.

“The good news is that we have just seized this go kart but we are appealing for information on those who were using it.

“I’d encourage anyone that witnessed or witnesses this type of behaviour on the road to contact the police immediately.

“This is reckless behaviour of the driver – illegal driving on our roads will not be tolerated. There are a number of offences committed here, including: dangerous driving and driving with no insurance and we will be taking this seriously and we will be investigating.

“The consequences to this sort of behaviour could be devastating and I’m surprised that no one was injured. I’d like to remind dangerous drivers that if you were to cause a fatality on the roads, if prosecuted for death by dangerous driving, you could expect a custodial sentence up to 14 years.

“I’d like to appeal to anyone with any information on this or anyone who may have dash-cam footage of this incident to please get in touch with Gwent Police on 101. You can also send a direct message to our Gwent Police Facebook or Twitter social media pages.”