The hair-raising video shows Zbigniew Kaczorowski, 55, driving in the slow lane of the M1 before he begins to indicate 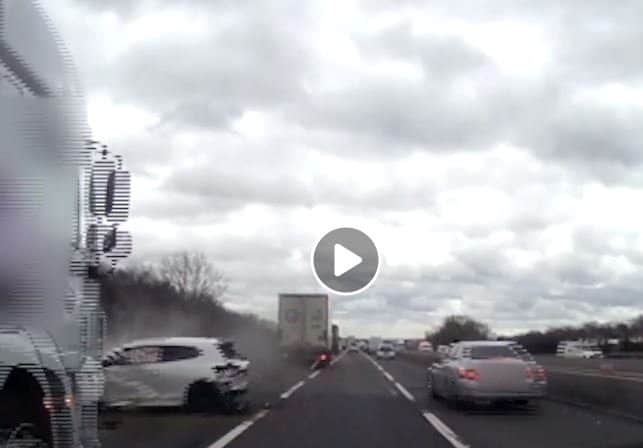 Shocking dashcam footage captures the terrifying moment a lorry driver pulls out into the middle lane of a motorway and smashes into a car.

The hair-raising video shows Zbigniew Kaczorowski, 55, driving in the slow lane of the M1 before he begins to indicate.

But as he pulls out he ploughs into the back-left corner of a white VW Sirocco already in the middle lane.

The car is spun round the front of Kaczorowski’s HGV and then is smashed between it and the verge.

Debris from the obliterated vehicle can be seen flying all over the road as the lorry swerves past it.

As the ruined VW comes to a halt across the motorway lanes, another lorry can be seen striking it as it attempts to stop.

The two people in the white car miraculously survived with non-life threatening injuries.

The driver of the other HGV was uninjured.

The crash resulted in two junctions of the M1 being closed for three hours on March 7.

He was disqualified from driving for 12 months and ordered to pay £207 in fines and costs.

Posting the video on social media, a spokesman for Thames Valley Police police said: “This dashcam footage will shock you.

“On 07/03, Zbigniew Kaczorowski, 55, from Poland pleaded guilty at Milton Keynes Magistrates’ Court to careless driving after he crashed into a VW Sirocco on the M1.

“Thankfully, the driver and passenger of the VW didn’t suffer life-threatening injuries.

“Please be careful of your blind spots.”