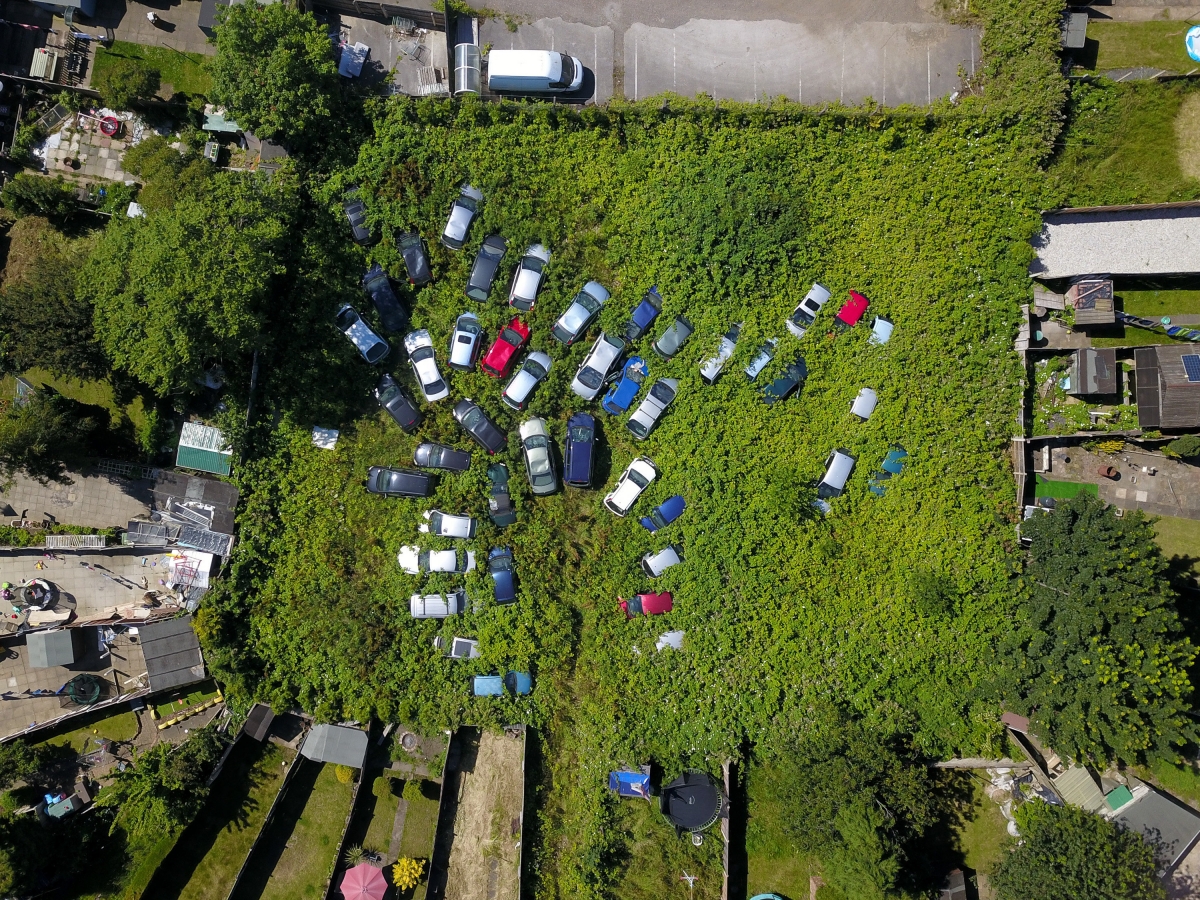 Eerie aerial photographs reveal how an inner-city allotment has been turned into a car graveyard crammed with dozens of abandoned vehicles.

More than 30 cars have been dumped on the patch of land in the middle of a housing estate.

The vehicles have been piling up on the allotments in Walsall, West Mids., since last year.

Residents have complained to Walsall Council and police about the cars which they say have turned the area into a magnet for vandals.

Retired teacher Ann Dutton, 66, has lived in her home backing onto the allotment for 35 years.

She said: “They cars started being brought in last year, around January or February time.

“First there were just a few on the side then it built up over five or six weeks.

“A neighbour told me people were selling them from there, but they have never moved.

“Windows have been smashed though and bonnets gone, so people can clearly get in.

“My concern is if any of those cars had petrol in the tanks, if they did go up, there’s no easy access for emergency vehicles, so how will they put the fire out? It’s a major problem.

“It’s just not something you want dumped behind your house.”

Stuart Smith, who lives in a flat overlooking the cars, added: “I’ve only lived here a year
so I moved in when the cars were here, but it’s not nice.

“I can see them all outside my kitchen window.

“I’ve noticed one or two more too, so they’re increasing. One or two people have gained access and it looks like they’re stripping parts.

“As a resident, it’s a bit worrying. And for those whose homes directly back onto it, I imagine it’s quite a concern for security reasons.

“It’s just an eyesore. It’s not the most glamorous place to look at. And there are sometimes some unscrupulous people walking about.

Another resident, who did not want to be named, said: “It’s shame an allotment has been allowed to be turned into a car graveyard.

“Young kids go in and smash the windows. It’s wrecking the area because the allotment used to be somewhere people could enjoy and grow their own fruit and veg.

“The police and council have been powerless to stop the cars from being dumped here and all the while, people living here have to suffer with them.”

Councillor Garry Perry, portfolio holder for community, leisure and culture at Walsall Council, said: “The land is privately-owned so we are investigating ownership and what can be done to resolve the issue.

“We are reviewing our records and have reached out to the complainant for further information.”