"If they had to get to him for something more serious, it could have been the difference between life and death. They had to go quite a distance and then if they had to trolley someone that far back to the ambulance it would cause a crucial delay. 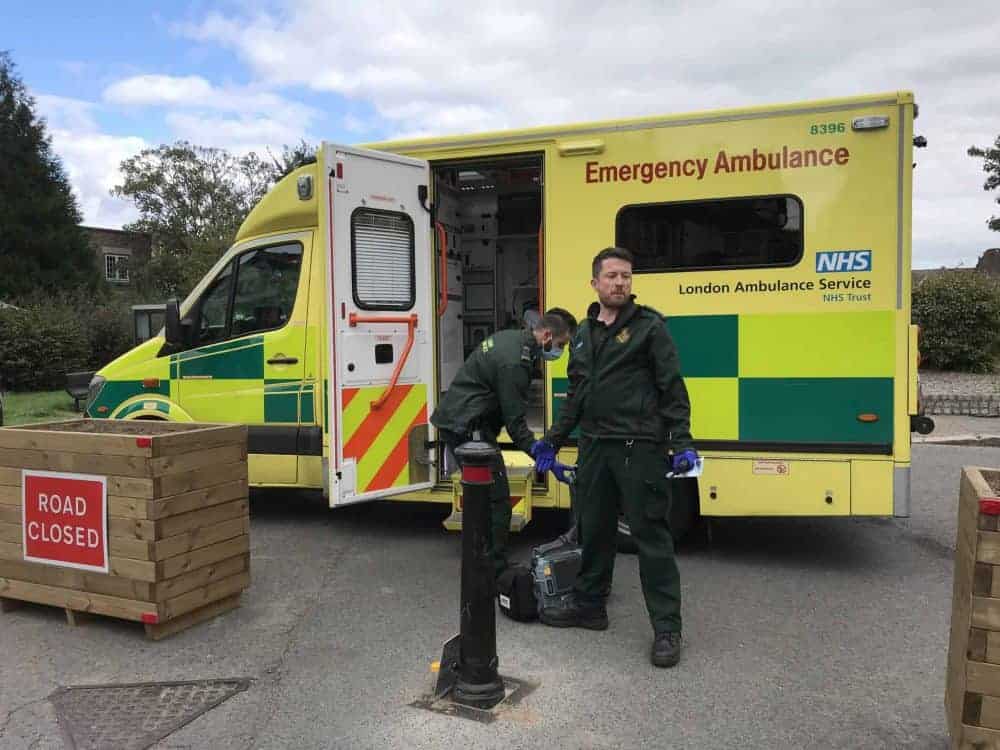 Paramedics stuck behind the bollards. Credit;SWNS

Paramedics had to wait up to 20 minutes to get to a patient who had collapsed in an alleyway because their ambulance was blocked by new bollards installed as part of a council traffic scheme.

Emergency services were called after a man was found unconscious by residents, but the medics were impeded by a new one-way system that stopped traffic entering the road from one end.

London Ambulance Service had not been issued with keys to the new barriers installed in Ealing, west London, at around 2.15pm on Saturday.

The new bollards and flower beds, which were put up by Ealing Council three days before the incident, stop cars entering Leighton Road – where the patient was found – from Northfield Avenue.

The measure is part of a new Low Traffic Neighbourhood (LTN) scheme introduced in the area to re-route motorists away from certain areas.

Witnesses said the paramedics were angry they could not get their emergency vehicle close to the man who needed medical attention.

Dominic Small, who lives near the alleyway where the man was found, said it took the medics around 15 to 20 minutes to park, then walk around 40 yards with their equipment to attend to the sick man.

The 53-year-old said: “The man had collapsed in the alleyway near my house and when the paramedics arrived he said he had to wait around 15 to 20 minutes trying to get access  because he hadn’t got keys and didn’t have any information about the changing road system.

“He [the paramedic] was really quite cross about the whole situation. In the end he had to park across on the other side of the barriers and walk to the patients around 30 to 40 meters and treat him that w

“The paramedics said it was a risk to health and safety and we should complain to the council as they can’t complain.

“I asked the council why they haven’t removed the barriers given that they now know the ambulance services don’t have keys, but have not got a response yet.”

The ill man was treated at the scene and refused to be taken to hospital, the LAS said.

Cllr David Millican said that on Tuesday evening an elderly resident who lives inside the Northfields traffic scheme also fell ill and the ambulance took an extra half-and-hour to get to their home due to the new diversion.

He said: “An elderly gentleman who lives within the Northfields traffic scheme, and whose partner had taken a fall on Tuesday evening, told me that it took the ambulance crew over 30 minutes to find its way to their home through the maze of road blocks.

“His partner stayed in hospital overnight and is fine, but was worried if it had been a matter of life and death.

“I’ve been warning senior councillors and council officers for many weeks that the emergency services would struggle to navigate and pass through the road blocks.

“This constituent was very concerned at the slow response from the ambulance service and what would have happened if it had been a matter of life and death.

“The refuse lorries are unable to pass through the barriers, meaning it is taking them much longer to complete their rounds, as there are sections of the scheme that their lorry cannot reach.

“If refuse lorries cannot pass through the barriers then clearly fire engines cannot either, despite the assurances we have received.”

Resident Christina Fox also said the new barriers were dangerous and someone could “die waiting” for an ambulance.

She said: “While I broadly support the LTN I am very concerned that should a family member need an ambulance, they could die waiting.

“While the gap between the raised beds is big enough for the fire brigade and ambulance vehicles. That is of no consequence if the ambulance staff do not have a key.”

London Ambulance Service claimed they reached the first patient within their target of 18 minutes for a category 2 emergency call.

Category 2 calls are those that are classed as an emergency for a potentially serious condition that may require rapid assessment, urgent on-scene treatment or to be urgently taken to hospital.

A spokeswoman said: “Our medics are well trained in using a wide range of tools and their own knowledge to help them navigate busy London streets to get to patients as quickly as they can.

“On August 30 we were called at 2:14pm to reports of a person unwell on Leighton Road.

“We arrived at the scene and were treating the patient within 14 minutes – within our category 2 response time.

“Once our medics had delivered their clinical assessment of the patient he declined further treatment at hospital.”

An Ealing council spokesperson said: “All emergency services carry keys to unlock width restrictors, bollards and gates on local roads as standard. We are supporting local emergency services by delivering additional keys to ensure that staff have them wherever needed. Also all rubbish and recycling trucks have keys and rounds are being completed.”

“We consulted fully with local emergency services on each LTN proposed across the borough and at least three weeks before installation and feedback were used to amend and strengthen the resulting plans. No formal objections have been raised around the safety of residents associated with any part of the initiative. “It remains vital that we act now to create a borough that is easier and safer for people to walk, cycle, and use wheelchairs, buggies and scooters as alternatives to using public transport. We need to allow people to socially distance and work to avoid a spike in motor vehicle use as we come out of lockdown.

“We are encouraging everyone living in an LTN to share their views and help us shape the initiative going forward. They have the chance to comment throughout the initial six-month trial and again in a consultation after this period. Visit https://www.ealing.gov.uk/info/201268/low_traffic_neighbourhoods  for further details.”