"It looks like everyone else was in the same position though. I turned up around 9am. The queue was well over a mile long. I was still waiting to get in at 2pm." 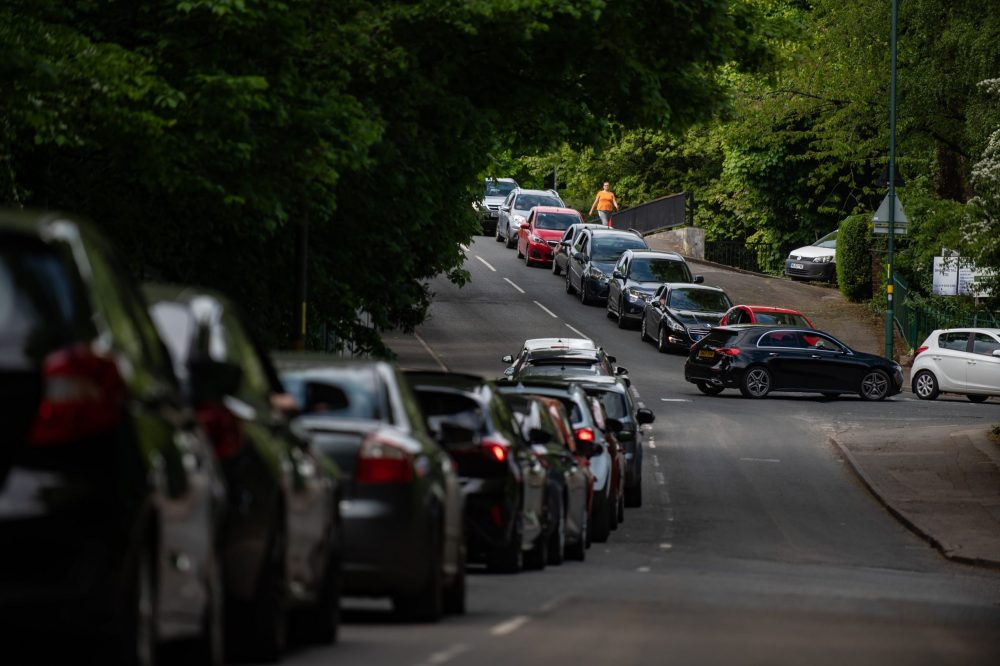 Cars queue to get into the Birmingham City Council Tip on Lifford Lane, Birmingham, May 7 2020 Credit;SWNS

Massive queues involving hundreds of cars lined the streets outside tips across Birmingham yesterday after they reopened to residents following weeks of lockdown.

Motorists began queuing from as early as 3.30am outside recycling centres – over seven hours before they were due to open at 11am.

Pictures taken at the Lifford Lane tip, in the Kings Norton area of the city, showed as many as 150 cars lining up to dispose of their household waste.

Hospital worker Kerry Fletcher, 36, of Northfield, Birmingham, was stuck in her car with her two young children, aged three and five, for more than five hours waiting to get in.

She said: “It has been an absolute nightmare. I’ve had a kitchen renovation and had some things leftover from that even though we had a skip.

“You can’t just leave it so I wanted to get rid of it at the first given opportunity. I arrived at 10.30am and I’m still waiting to get in now.

“People are coming in from different directions, so keep nipping in. Some cars have only been here and hour while people like me have been stuck for hours on end.

“Its been a battle keeping the kids entertained, the batteries on the phones, the DVD player, the iPads are all dead.

“I’m trying to stay positive but I’m losing the will to live and wish I’d never bothered now. It has been horrendous.”

Another resident Gary Palmer, 44, of Moseley, said he had also been waiting for several hours to get inside to get rid of rubbish he had accumulated during lockdown.

He said: “We’ve been doing a lot of work on the house and garden during lockdown, all those jobs that you put off usually, but don’t have an excuse to anymore.

“But the problem was all the leftovers. The household bins only hold so much so we’ve been waiting for this day to come.

“It looks like everyone else was in the same position though. I turned up around 9am. The queue was well over a mile long. I was still waiting to get in at 2pm.”

Birmingham City Council has taken the decision to reopen the majority of their recycling centres following closures across the city on March 24.

Four of their five sites were open from yesterday with restrictions including one person per vehicle and social distancing measures.

All of the sites are operated by Veolia which said the tips had been opened for “essential use only”.

A Veolia spokesperson said: “To ensure the safety of the public and our staff, we are opening for essential use only.

“This is for residents who have a problem with storing too much waste or have oils or other hazardous waste at home.

“Please think carefully before you decide to visit the site. Non-essential use puts yourself, other members of the public and our staff at risk from spreading the infection.

“Anyone in self-isolation or with COVID-19 symptoms must NOT visit under any circumstances.

“The number of vehicles on-site will be restricted and cars should be driver-only where possible.

“Extra guidelines in place will cause delays and we ask you to be patient.

“Our staff are working hard in difficult circumstances to keep this site operating. Please treat our staff with respect at all times.

“We take our responsibility to your health and safety and that of our staff very seriously.

“We will be cleaning handrails regularly and closing the site at certain times to allow for thorough cleaning.

“Our operatives are following Government and industry guidance on personal hygiene.”