Police are now hunting for the trio following the dramatic incident, which took place near the junction for Tewkesbury, Glos., last night (Thurs) 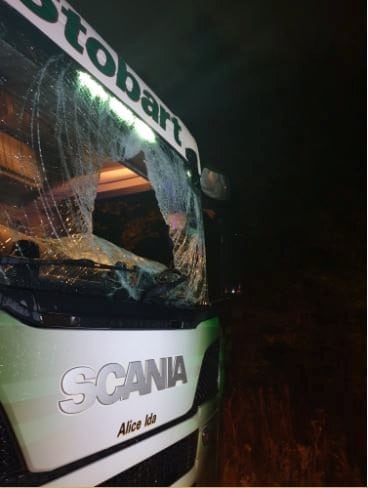 A lorry driver suffered a fortunate near-miss while driving on the motorway – after a group of “stupid” teenagers threw a SANDBAG through his windscreen from a bridge.

Police are now hunting for the trio following the dramatic incident, which took place near the junction for Tewkesbury, Glos., last night .

The driver was travelling south at around 11pm when he saw three people standing on a bridge – and realised they were about the throw something.

The youngsters chucked a hessian sandbag which burst through the windscreen and sprayed sand everywhere.

Luckily, the hardy driver managed to regain control of the vehicle after being narrowly missed and came to a stop safely – despite being very shocked.

“I suspect this is probably the actions of someone out on Halloween with their friends, probably showing off and messing around, who thought it would be funny to throw the sandbag at the lorry, not thinking about the ramifications of their actions.

“I cannot stress in the most serious terms how dangerous it is to do such a stupid thing. The lorry driver could have been seriously hurt or even killed.

“If he had been rendered unconscious or had lost control of his lorry then we could easily have been dealing with serious injuries or fatalities.”

The group are described as between 15 and 16 years old, quite short and all wearing dark clothing.

Police are urging any witnesses – particularly those with dashcam footage – to come forward.