by Ben Cusack
in Automotive, TV 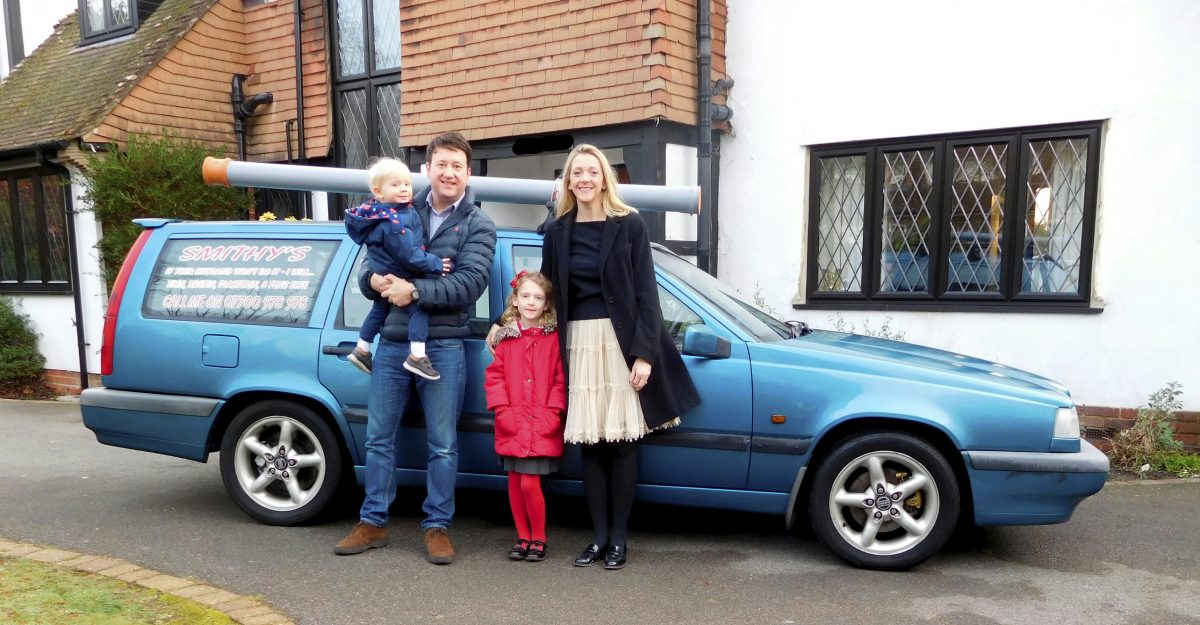 A Gavin and Stacey superfan is delighted they are making new shows – because he drives around every day in Smithy’s Volvo.

The battered old estate even has its original number plate and “Smithy” sign on the back window.

Insurance worker David says he is photographed by fans on a daily basis as he uses the motor on his daily commute and on trips to the supermarket.

The 47-year-old stumbled upon Smithy’s Volvo on a classic car website in July last year and snapped it up as a fellow Welshman and fan of the hit TV show.

The father-of-two, from Woking in Surrey, said: “We treat it as a bit of a laugh.

“We have Nessa and Smithy masks and sometimes at the traffic lights I stick one on and people are laughing.

“It is my main car. I drive it to work, to the supermarket, to the tip – everywhere.

“Every time I go out, I come back to the car and somebody will be taking a photo of it or people will be videoing the car as we’re driving along.

“It’s not as famous as Del Boy’s three wheeler van but it is something fun and the kids love it.

“We needed another car to help us move house and I was looking for an old 1970’s Volvo.

“They have not even changed the number plate, if you look it is the same one that was used in the show.”

Wife Anna Webb, 41, was shocked when David pulled onto their driveway in Smithy’s Volvo for the first time.

But the pair now enjoy posing with their Nessa and Smithy masks in the motor and have even driven it to Barry Island in South Wales, where Gavin and Stacey was filmed.

David said: “My partner’s reaction was ‘what the heck is that?’

“I suppose a Volvo with Smithy on the side of it and a big pole on top is not ideal.

“We took the car to Barry Island for the May bank holiday. Driving down there on the M4, people were pulling up and putting their thumbs up or taking videos of the car.”

David met with staff at Dave’s Coaches which operate tours of Stacey’s hometown on the original bus as seen on-screen.

Fans start at the station and visit the church and the pub before ending at Stacey’s iconic terrace house.

David said: “When we arrived, everyone thought we were part of the show and that we were the extras so we had to explain we were just down there on holiday.

“We sat outside Stacey’s house and people took photos with the car.

“We couldn’t believe how popular the show is ten years after it was filmed.”

David was excited to hear Gavin and Stacey will be returning to the screen after almost a decade and has already tweeted James Corden to offer him the Volvo.

He said: “It is brilliant that they are doing another series and we would be more than happy for them to use the car. It would be fantastic.

“I have tweeted James Corden about the car but I haven’t heard anything yet.”

The Volvo still has the Smithy’s sign on the back window which reads “if you husband won’t do it – I will” and gets lots of attention from passing motorists.

David added: “I think it’s important to keep Smithy how it was on the show and not change too much about its appearance.”

The dad-of-two has the box set for all 20 episodes broadcast over three series which he has shown to daughter Jessica, five, and son Max, two, who love driving in Smithy’s Volvo.

David said: “The kids love it. We were out the other day and Jessica randomly said to somebody ‘my daddy owns the car from Gavin and Stacey.’

“My two year old did not appreciate it as much but he will say ‘Smithy, Smithy’ at the car.”