The car smashed into the Jones' garden, landing between a one-year-old and five-year-old, and their parents 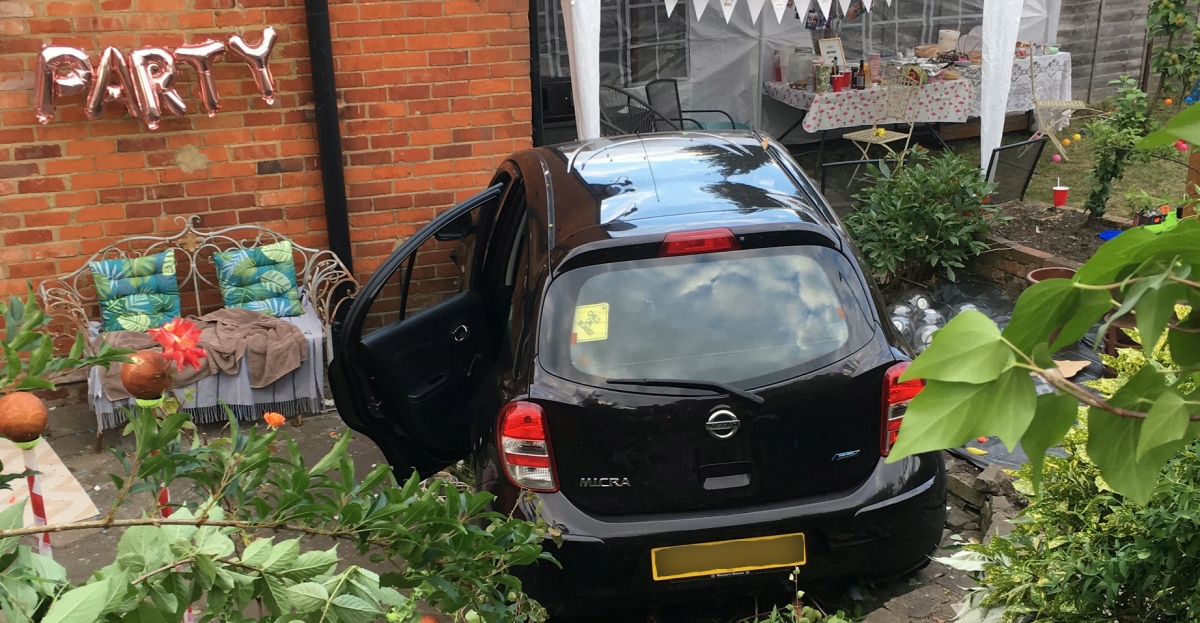 A family had a lucky escape after a car careered off the road and ploughed into their garden during a childrens’ birthday party – missing the kids by inches.

Ryan and Katie Jones were throwing a party for kids Charlie, ten, and Orson, three, when the car smashed through their fence.

The black Micra came to a stop in the middle of the garden – missing two kids, aged one and five, by a couple of feet on the left side, and a group of adults on the right.

The kids were playing with a toy kitchen – right next to the crater left behind by the vehicle, which stopped just short of the party marquee in Camberley, Surrey.

Dad Ryan, 30, a firefighter, said the family were lucky nobody was seriously injured.

He said: “We’re very lucky it wasn’t an extremely serious accident that day. Charlie and Orson’s birthdays are close together so we always have a garden party.

“We had about 50 people all together. Thankfully most had gone home. It was just my family and another couple and their two children.

“We were sitting chatting and our kids were on the trampoline and the other kids were at the play kitchen.

“I think I was watching the kids at the red kitchen and all of a sudden there was this massive crashing sound.

“The fence came down, the concrete posts came down and it was just there – this car. It happened so quickly.

“If I wasn’t watching at the time I wouldn’t have realised it has come in between us and kids, with a margin on either side.

“The others didn’t realise that at first so you can imagine how they felt.

“The margin was so tight. They couldn’t understand how the children had been missed.

Ryan said the kids were left screaming after the incident on July 13, and after checking they were ok, he went into “firefighter mode” and turned off the engine and made the car safe.

He said two adults and child got out, and the police attended.

Ryan and his wife, Kate, a housewife, are calling on safety measures to be installed at the T-junction outside his home.

He wants to protect stepson Charlie Waters, ten, daughter Hattie, five and son Orson, three, before there is a more serious accident.

A force spokesman said: “We were called following reports that a car had driven into a garden in Camberley on Saturday evening July 13.

“The car, a black Micra, crashed through the fence and into the garden of an address in Gordon Avenue around 7.20pm.

“No-one was injured as a result of the incident and the car has been recovered. No arrests have been made.”