Daniel Richards drove with the victim on the front of his car for around 30ft after he swerved out of the way of an oncoming vehicle and mounted the kerb - before driving off when she fell. 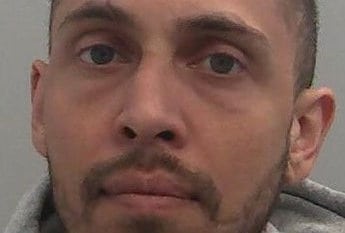 A dangerous driver has been jailed after he smashed into a pedestrian who was walking along the pavement – because his car had no brakes.

Daniel Richards drove with the victim on the front of his car for around 30ft after he swerved out of the way of an oncoming vehicle and mounted the kerb – before driving off when she fell.

The 34-year-old, from Gillingham, Kent, has put behind bars for three years after appearing at Maidstone Crown Court yesterday (Mon).

The court heard how Richards, whose car had defective brakes, drove onto the pavement when faced with an oncoming vehicle, continued down the pavement, and struck the unsuspecting woman.

Instead of stopping, Richards kept going with her top of his car before she fell under the front of the car and was driven over.

After going into hiding, Richards was found at a flat in Woolwich two days later.

Detective Constable Martin Stevens, Kent Police’s investigating officer for the case, said: “There are no mitigating circumstances for the levels of wilful ignorance Richards’ displayed towards the victim, who was completely innocent and unknown to him.

“He made a conscious decision when he set out that day to drive his vehicle knowing about its dangerous condition and he showed no remorse for the victim or her condition following the incident when he fled from the scene.

“The victim is continuing to recover from multiple serious injuries because of his actions and I am pleased that we have secured some justice for her.”