Hazel Ross, 17, was driving with L plates in her silver Renault Clio, with her mum Wendy and friend Dylan Ayres, at around 10.30am last Friday (30/8) 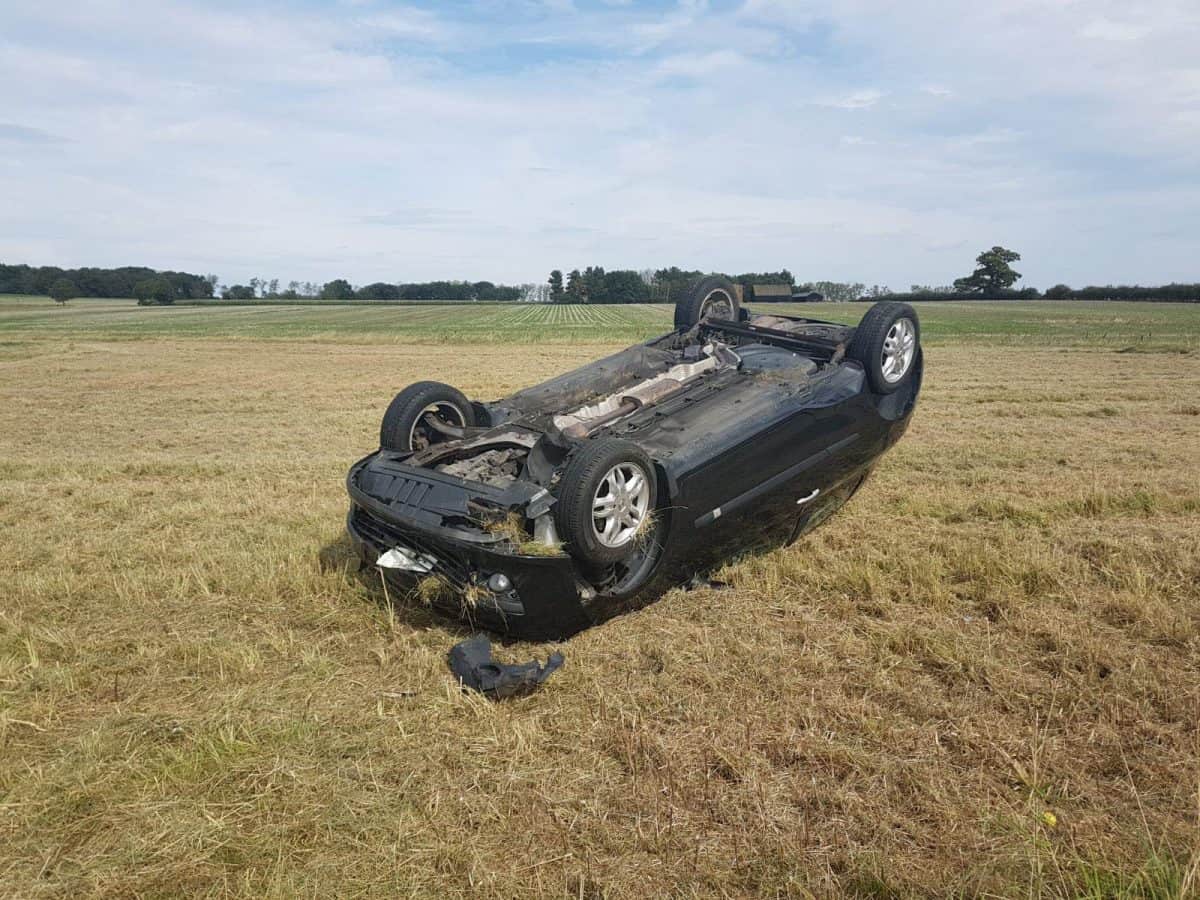 A learner driver who totalled her £2,000 car on the way to her final driving lesson passed her practical test the following day.

Hazel Ross, 17, was left with concussion after she says she was forced off the road by another car while driving with L plates in her silver Renault Clio.

She was driving to Chatteris, in Cambs., at 10.30am last Friday for her final driving lesson with her mum Wendy along the B660 road which has a tight bend.

Hazel claims a Ford Fiesta drove “closely” behind her before attempting to overtake her on the bend.

And while attempting to complete the manoeuvre, Hazel claimed the Ford Fiesta then went back into the left-hand lane closely in front of her.

She claims she had to brake to avoid hitting the car but instead ended up loosing control.

Police are investigating the incident.

Hazel, from Ramsey, Cambs., said: “That’s when the iconic life flashing before your eyes happened.

“I swerved to avoid him hitting me, but I hit the grass verge.

“Next thing I know, I’ve lost all control of the car and we’ve cleared the ditch, and are headed towards a rusted metal pole in the field.”

Hazel attempted to make a harsh right turn and slammed her brakes but instead hit the pole.

She added: “The car then flipped onto the roof, completely displacing the pole and unearthing it.

“When the windscreen started cracking, my mum screamed, and the next thing I know, we’re on the roof dangling from our seatbelts.”

Hazel, and Wendy managed to climb out of the car, after the driver of the Ford Fiesta had driven off and phoned for the emergency services who rushed to the scene.

Paramedics found Hazel had suffered from minor injuries as well as concussion.

But despite the crash, Hazel was still determined to take a lesson to prepare herself for the test the next day.

The next day, she took her test and passed with three minors.

Hazel said: “I can honestly say I was so worried I would fail, I was already nervous before – but I was even more worried after crashing.

“I was so happy when I passed.”

She continued: “I’m not saying the Fiesta is completely to blame, I could have done things differently, but it’s just a load of what ifs and maybes.

“All I know is that I’ll be avoiding that road between Glatton and Holme for a while, and I think my mum will be, too.”

The Ford Fiesta’s registration plate has been passed to police.

An East of England Ambulance spokeswoman said: “We were called at 10.34am with reports of a collision in Glatton Lane, Glatton.

“We sent one ambulance and took one person to Peterborough City Hospital for further treatment.”

A Cambridgeshire police spokeswoman said: “We were called at 10.40am on Friday (30 August) with reports of a car in a ditch on Glatton Lane.

“The three people were in the vehicle were uninjured and the road remained open.”