By Jack Peat, Editor of The London Economic  The vote for Scottish independence seems to have raised a few eyebrows in God’s County. If a country that is less populous and has a relatively similar economic fabric wants to go at it alone, shedding the out-of-touch heart of England that is London, why shouldn’t we? […]

by Joe Mellor
in Politics, Sport 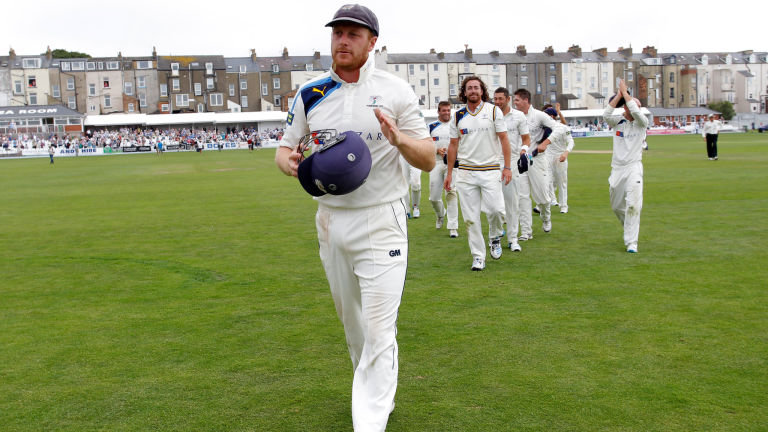 The vote for Scottish independence seems to have raised a few eyebrows in God’s County. If a country that is less populous and has a relatively similar economic fabric wants to go at it alone, shedding the out-of-touch heart of England that is London, why shouldn’t we? There’s 5.3 million marvellous souls in Yorkshire that share a common identity and almost patriotic pride in their county and there are endless reasons why a devolved Yorkshire could and possibly should work. But that’s a debate for another day; one disgruntled chunk of Britain at a time please!

Another similarly credible debate worth addressing is whether Yorkshire County Cricket Club, on the verge of clinching the top prize in the domestic game after a stellar season, could beat an England Cricket Team which has suffered miserably for the past year.

Under the guidance of first team coach Jason Gillespie and captain Andrew Gale Yorkshire have been transformed from struggling a Division 2 side into Division 1 title contenders, narrowly missing out to Durham last year and about to wrap up their first County Championship since 2001 with a win over Nottinghamshire.

The bottom-up approach championed under Gillespie has allowed young players to come to the fore and there’s now a host of talent within the squad, the fruits of which are only just being recognised on an international level. South Yorkshire-born Joe Root is the first name that will spring to mind after making his debut in the 2012 Test series in India, but since then 22 year-old Gary Balance has proved himself to be an integral part of England’s batting order and Liam Plunkett’s international career has been resurrected. And there’s plenty more to come from Yorkshire. Adil Rashid could be the answer to our spin problems and the prolific opening pair of Adam Lyth and Alex Lees have been tipped for Test honours, not to mention the likes of Jonny Bairstow and Tim Bresnan.

It all prompts the question; If Yorkshire were to play the remaining counties of England, who would win?

The most tempting angle to approach this from is how England would have fared without  Yorkshire players this summer. Of course, dealing in hypotheticals is a tricky business, particularly for a Yorkshireman that is perhaps getting carried away by our first County Championship since 2001, but I would contest that England’s woes could have turned into an all-out catastrophe were it not for its Yorkshire contingent.

The England batting order showed its fragility this summer and was bailed out (forgive the pun) on more than one occasion by the middle order. Gary Balance was recently described by Nasser Hussain as a fluent version of Jonathan Trott and Joe Root’s unbeaten 154 was the crux of England’s remarkable recovery in the first test which included a world record 10th wicket stand of 198. At the final test at the Oval Root also scored his fifth test century scoring an unbeaten 149 to help England post a first innings score of 486 all out in reply to India’s 148 all out.

Head-to-head is a less tempting approach to the big question. Yorkshire would certainly struggle, particularly against the bowling strength of England supplied by the likes of Jimmy Anderson’s fierce pace bowling and the ability of Stuart Broad to clinically dismantle a batting line up. But Yorkshire have a lot of strength in their battling order and Lyth and Lees could easily take a good stand before Root and Balance add to the total. What’s more, Yorkshire look far more like a team, the full package. It’s difficult to spot a weakness in the Yorkshire line-up whereas you can literally pick apart the England squad.

Realistically, an independent Yorkshire would fare pretty well against England as things stand. But hypotheticals aside, the truism that a strong Yorkshire makes a strong England will remain for some time to be the case. As Scotland gets all ‘up in Westminster’s jammy’ about independence on a political and economic level at least Yorkshire can be proud of our sporting achievements. Scotland have lost to Hong Kong and Ireland this year and although cricket may not be its strong suit – I’m sure they’d demolish Yorkshire at tossing sticks and curling stones on frozen lakes –  we’d still have them at athletics and if we can get Smudger back to form at MK Dons, shed a few pounds off Paddy Kenny and see if James Milner will come home we may even do them at football.

Remember, we got more medals than Australia in the Olympics. That’s as good as independence.