Sport News 24/7 By Matthew Biggin  @MatthewBiggin  @TLE_Sport There seems to be a storm brewing on Wearside as Sunderland have endured a torrid month.  First star player Adam Johnson was arrested on suspicion of sex with a minor.  This was compounded by further abject results on the pitch.  It all came to a head with […] 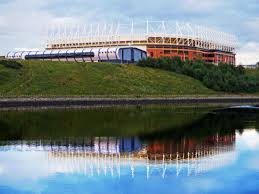 There seems to be a storm brewing on Wearside as Sunderland have endured a torrid month.  First star player Adam Johnson was arrested on suspicion of sex with a minor.  This was compounded by further abject results on the pitch.  It all came to a head with the recent 4-0 home defeat to fellow strugglers Aston Villa, a result that would ultimately cost Gus Poyet his job.

So what are the issues at the core of this popular football club?  It’s easy to lay blame at the feet of Poyet.  His team’s performances were, quite frankly, dismal in recent weeks.  Following last season’s great escape, and heroic cup run, many backed Poyet to take the Black Cat’s to the next level this season.  For all manner of reasons, this hasn’t been the case.

Okay, he has had injuries to contend with, but the club’s dealings in the transfer market have left a lot to be desired.  In December a clearly frustrated Poyet claimed to have little say in the club’s transfer policy.  Yet, strangely, he has become the fall guy for the current regime.

On the flipside, in the past 10 years the Wearsiders have appointed seven different managers and it doesn’t seem to have gotten them very far.  Sure, Ellis Short is an ambitious man, and that’s a commendable trait.  But if you aren’t at the top already, success is a process.  It requires rebuilding and a strong, consistent philosophy.  Consistency is having the same management style for several years and having the players buy into that philosophy.

Okay, yes, I understand that isn’t the era of the game we live in.  Success has to be instant, however fleeting.  Generation X-Factor demands instant gratification, and if the success isn’t instant they’ll get rid of the incumbent manager and replace them with another.  And so the cycle goes around and around and around.

This is okay for short-term, prolonged success at clubs like Chelsea and Manchester City.  They have the squad and the finances to support such flagrancy. But Sunderland do not, and they need to be careful about their hastiness to hire and fire.  Di Canio was a huge mistake and one from which you would have hoped the club would learn.

I rated Poyet and felt he’d have been good for at least another season.  Jermain Defoe was a shrewd signing, and one that will probably keep them up.  It’s the failure to address an atrocious backline that most likely cost Poyet his job.

Dick Advocaat is an unknown quantity so how he will fare remains to be seen.  There’s no doubt the introduction of a new manager will be met with an upturn in form (Sunderland can’t really get any worse) as is always the case.  We’ll have to wait until at least the middle of next season to see what Advocaat is truly about.  But for now Sunderland fans can rest easy knowing they’ve secured themselves another season of Premier League football.

Whether the club is serious about engaging in something other than a perpetual relegation dogfight in the future remains to be seen.