He took over at Liverpool and helped transform the club and laid the foundations for their subsequent European and domestic success. The no-nonsense Scot won three First Division titles, two FA Cups and the UEFA Cup before leaving Anfield in 1974. 1.‘Some people believe football is a matter of life and death, I am very […] 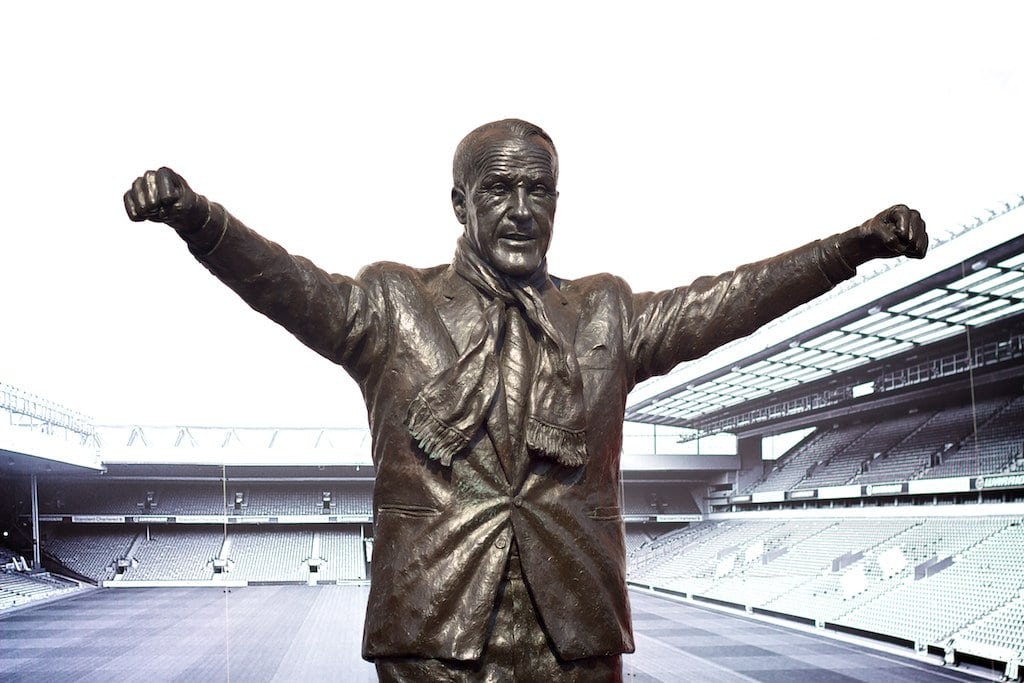 He took over at Liverpool and helped transform the club and laid the foundations for their subsequent European and domestic success. The no-nonsense Scot won three First Division titles, two FA Cups and the UEFA Cup before leaving Anfield in 1974.

1.‘Some people believe football is a matter of life and death, I am very disappointed with that attitude. I can assure you it is much, much more important than that.’

2.‘Pressure is working down the pit. Pressure is having no work at all. Pressure is trying to escape relegation on 50 shillings a week. Pressure is not the European Cup or the Championship or the Cup Final. That’s the reward.’

3.’If Everton were playing at the bottom of the garden, I’d pull the curtains.’

4. ‘A lot of football success is in the mind. You must believe that you are the best and then make sure that you are. In my time at Liverpool we always said we had the best two teams in Merseyside, Liverpool and Liverpool reserves.’

5.‘It was the most difficult thing in the world, when I went to tell the chairman. It was like walking to the electric chair. That’s the way it felt.‘ On leaving Liverpool in 1974

9. ‘The trouble with referees is that they know the rules, but they don’t know the game.’

10. ‘At a football club, there’s a holy trinity – the players, the manager and the supporters. Directors don’t come into it. They are only there to sign the cheques

12. Talking to new-signing Alec Lindsay before a game: “When you get the ball, I want you to beat a couple of men and smash the ball into the net, just the same way you used to at Bury,” Lindsay replied: “But, boss, that wasn’t me, it was Jimmy Kerr.” Shankly then turned to his assistant Bob Paisley and said: “Christ, Bob, we’ve signed the wrong player.”

13. “A football team is like a piano. You need eight men to carry it and three who can play the damn thing.”

15. “’I know this is a sad occasion, but I think that Dixie would be amazed to know that even in death he could draw a bigger crowd to Goodison than Everton on a Saturday afternoon.’ – speaking at the funeral of Everton legend Dixie Dean

16. After beating Everton in the 1971 FA Cup semi-final: “Sickness would not have kept me away from this one. If I’d been dead, I would have had them bring the casket to the ground, prop it up in the stands and cut a hole in the lid.”

17. After Shanks changed his mind on buying a player, a disgruntled scout complained: “He has football in his blood,” to which Shankly replied: “You may be right, but it hasn’t reached his legs yet!”

18. “I was the best manager in Britain because I was never devious or cheated anyone. I’d break my wife’s legs if I played against her, but I’d never cheat her.”

21. To a translator, when being surrounded by gesticulating Italian journalists – ‘Just tell them I completely disagree with everything they say!’

22. “Of course I didn’t take my wife to see Rochdale as an anniversary present. It was her birthday. Would I have got married in the football season? Anyway, it was Rochdale reserves.”

23. After being caught out putting ‘Anfield’ as his place of residence on a Brussels Hotel’s register: “But that’s where I live!”

24. “The problem with you, son, is that all your brains are in your head.”