Sport News 24/7 By Richard de Winter @rgdewinter  @TLE_Sport The World T20 tournament may have only just finished, and Carlos Brathwaite’s final six may only just be beginning its downward trajectory (probably colliding with Jaap Stam’s penalty from Euro 2000 on the way), but fear not, you won’t be without your cricket fix for long, […] 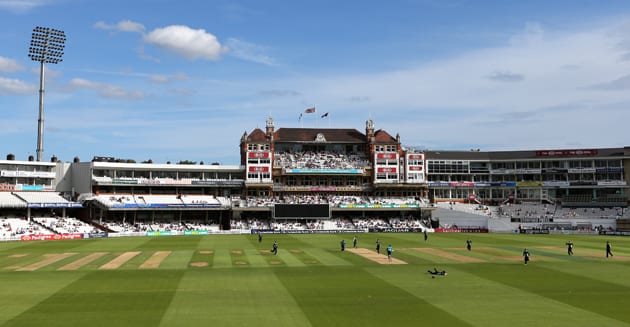 The World T20 tournament may have only just finished, and Carlos Brathwaite’s final six may only just be beginning its downward trajectory (probably colliding with Jaap Stam’s penalty from Euro 2000 on the way), but fear not, you won’t be without your cricket fix for long, for the English County Championship season is about to start.  TLE Sport went along to the Surrey CCC pre-season press day, in some rather unpromising drizzle, to see how the Brown Caps are shaping up.

Turn up to the Kia Oval for an international match, and the ground is buzzing.  Barely any of the 24,500 seats are empty, the queues for the bar are permanently at least four deep, and Mexican Waves and beer snakes are prevalent.   For a T20 match and it’s basically the same as on an international day, only with more people in suits and less time to get drunk.

Turn up to the Kia Oval for a County Championship match, however, and the ground is dead.  Outside of the members’ area barely any of the seats are filled, the bars are shut and Mexican Waves and beer snakes are utterly impractical.

There is a certain species of cricket fan that can be found in abundance in the members’ pavilion at the Oval, and no doubt in similar pavilions all over the country.  Clad in comfy, food-stained slacks, with the occasional socks and sandals motif, he (it is almost always a he) fills in scorebooks and wagon wheels with meticulous detail, using a variety of coloured pens, and an idle query as to the record 7th wicket stand for Kent against Northants at Wantage Road will send him scrabbling furiously for a well-thumbed Wisden or Playfair.  These fans collect in packs, unwrapping their tightly-wrapped meat-paste sandwiches, whilst observing in a nasal voice how last week’s Middlesex v Notts match was fascinating because the square root of the number of runs scored was the sum of the squad numbers of the spin bowlers used.

Secretly, a tiny part of me wants to be just like them when I grow up (how can they afford to live if they do nothing but ground-hop county cricket all summer), but can the County Championship in its current format survive, only watched in the main by such a small section of society?

The split of the championship into 2 divisions in 2000 has definitely increased the competitiveness of the tournament, but with 18 counties in total, there are still plenty of dead matches towards the end of the season, particularly in Division 2.  The argument is that creating regionalised franchises will lead to higher quality matches, and therefore larger crowds.  However, it’s not like the current system is failing to produce international-quality players for the national side.  Many of the counties provide an important sporting link to the local community, while some cricket fans will be loath to travel a longer distance to get to their new nearest team.  Rather than encouraging new fans, a move towards franchises may well drive away existing ones.

Anyway, I digress – how will Surrey get on this season, after a successful 2015 where they won promotion to Division 1 and lost (rather painfully) in the final of the 50 over competition?  Their preparations were rocked in January when coach Graham Ford received a ‘very generous offer he couldn’t refuse’ to return to international cricket with Sri Lanka, a move for which Surrey seemed rather unprepared.  Tasmanian Michael Di Venuto, who had many successful seasons as a batsman at Sussex, Derbyshire Durham, has been recruited from his role as batting coach to the Australian international side, and freely admits he doesn’t know an awful lot about the squad he has inherited, although he seems pretty happy with what he’s seen so far.

On the playing front, batsman Vikram Solanki, and bowlers Chris Tremlett, Tim Linley and David Balcombe have retired, while Di Venuto believes Kevin Pietersen has no plans to play for the club this year, although he’d be ‘more than happy to talk to him if he wanted to have a game.’  Potential England left-arm quick Mark Footitt has joined, as has former West Indies seamer Ravi Rampaul, and a couple of South African-born seamers Mat Pillans and Conor McKerr (because Surrey don’t have quite enough South African-born players in the squad).  It may appear as though the squad is rather overloaded with seam bowlers (to the four players above can be added Tom and Sam Curran, Matt Dunn, Stuart Meaker, James Burke and Jade Dernbach), but both Dernbach and Meaker will miss the start of the season with injury, while Sam Curran won’t be playing much before June as he’s got exams to take (he was unavailable for interview as he had to revise for his A-Levels).

Footitt is an interesting acquisition.  The leading wicket-taker in red ball cricket in the country in both 2014 and 2015 (albeit in Division 2 for Derbyshire), he has been in and around the England Test squad for over a year now, without quite making the breakthrough.  He toured South Africa over the winter, but failed to get the nod in the final Test, when, with the series won, it was surely an ideal opportunity to see how he’d get on at the highest level.  As a left-armer who swings the ball at a rapid pace (allegedly the quickest bowler in county cricket at the moment), he offers something that no other English bowler does, but I suspect the England hierarchy believe he won’t quite cut it at Test level.  It is vital that he maintains the same level of performance in Division 1, and his hunger to do so may well benefit Surrey at the start of the season.

It is interesting how many of the players talked of the step-up in quality between Division 2 and Division 1.  Zafar Ansari, as eloquent as you would expect from a man with a double first from Cambridge, mentioned how bowling attacks in Division 1 tended to have much more depth, a sentiment echoed by his fellow opening batsman Rory Burns.  Burns added how the pitches in Division 1, however, tend to play better, which could be beneficial to the batsmen.

There will be an experiment with the toss this season, in that the away team will have the option of bowling first; if declined the toss will take place as normal.  This is designed to discourage teams from preparing green, bowler-friendly wickets, and as a result to encourage more overs to be bowled by spinners, of which there is a dearth in the county game.  Whether this happens is a moot point, and Andrew Gale, the Yorkshire captain, was particularly vocal in his opposition to the move, but the Surrey set-up seemed rather unbothered about the whole thing, reasoning that a good side will win whatever the pitch conditions.

Surrey’s spin-bowling cupboard is a little emptier than they would like for the start of the season.  Last year captain Gareth Batty and left-armer Ansari formed an excellent partnership, Ansari in particular coming on leaps and bounds, to such an extent that he was named in the England party to play Pakistan in the UAE.  In a development that Chekhov would surely have enjoyed, he then promptly broke and dislocated his thumb while fielding the very same day, so badly that he has only started batting properly this week, and will miss at least the first match of the season.  With promising youngster Freddie van den Bergh also nursing a thumb injury, Batty is the only spin option at the moment.

For my money, the biggest question marks are over Surrey’s batting line-up, which showed an alarming propensity to collapse last year, particularly in one-day cricket.  Living legend Kumar Sangakkara will hold the middle order together, but the rest of the team all have something to prove.  At the top of the order Rory Burns, fresh from a winter playing grade cricket in Sydney for the same side as Moises Henriques (presumably they called particularly loudly if any high catches went their way), looks to have the game to adapt to a higher standard, but his potential opening  partners, Ansari and Arun Harinath have more to prove.  Ansari prefers to open, but by his own admission struggled last season with the pressure of bowling more and opening, and may be better off in the lower middle order, while Harinath has never particularly convinced even at Division 2 level, although some strong work with 2nd XI coach Ali Brown last winter contributed to a more productive 2015.

In the middle order, Steven Davies always looks serene and elegant until he manages to get himself out, more often than not caught in the gully region, while Jason Roy has yet to learn the art of playing a long innings, although the chances are that if he stays in for 100 balls he will have made a pretty sizeable contribution.

Then there is the wicket-keeping conundrum.  Davies gave up keeping in 2014 to concentrate on his batting, but this year has stated he would like to start again, presumably because he sees it as his best way into the England Test team.  However, the word from the club is that Ben Foakes will take the gloves in 4-day cricket at the start of the season, and, with Gary Wilson also at the club, Davies has admitted he may have to leave in order to further his international ambitions.

Surrey look to be in a far stronger position than the last time they played in Division 1 in 2013.  Players such as Burns, Ansari, Roy and Tom Curran have all grown as cricketers since then, and their shared experiences, both good and bad, have helped forge a very strong team spirit.  While it is unlikely they will challenge for the title (it’s hard to look past Yorkshire), Surrey should have enough quality to finish in the top 5, with the potential of a strong run in one of the one-day trophies.