With all the reality shows, New York-based sitcoms about friendship, and medieval-styled fantasy dramas about royal chairs, it’s easy to forget that the most-watched programs on TV in America are sports broadcasts. In fact, nineteen of America’s twenty all-time most-watched televised events are iterations of the Super Bowl—the only holdout being the series finale of […] 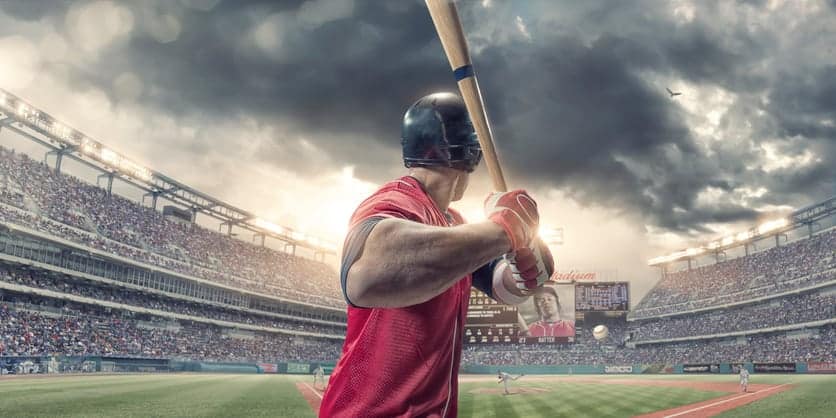 A close up rear view of a professional male baseball player wearing a red baseball strip and safety helmet, holding baseball bat just about to strike incoming baseball. The action occurs during a baseball game in a generic floodlit outdoor stadium full of spectators. Baseball ground, scoreboard etc are all fictional.

With all the reality shows, New York-based sitcoms about friendship, and medieval-styled fantasy dramas about royal chairs, it’s easy to forget that the most-watched programs on TV in America are sports broadcasts. In fact, nineteen of America’s twenty all-time most-watched televised events are iterations of the Super Bowl—the only holdout being the series finale of M*A*S*H.

Garnering considerable interest from viewers and participants alike all year round, sport has come to be seen as the backbone of American life, with the trio of football, baseball and basketball clearly dominating the field. But if you think about it, this importance is kind of surprising. So how did sports become part of the fabric of life in the most obese nation in the world?

With Major League Baseball selling more tickets than any other sport in the US, and common sayings such as “playing hard ball” or “in the big leagues” deriving from the game, it’s no wonder baseball is referred to as “America’s pastime”. Easily playable with family and friends, part of the game’s mass appeal is that its social nature; the long duration of a MLB game (nearly three hours on average) means spectators can sit and enjoy at their leisure.

The game’s popularity soared in the 1920s and in 1922, Yankee Stadium was the first large ballpark to be constructed. With football leagues in their infancy and basketball not yet a professional sport, baseball had the monopoly of sporting media coverage, sowing the seeds for the game to become America’s pastime.

Some of the largest MLB teams include the New York Yankees, the Los Angeles Dodgers and the Chicago Cubs. The Yankees are easily the greatest baseball team to have graced the game, winning a remarkable 27 World Series titles and being home to all-time legends like Babe Ruth and Lou Gehrig. The LA Dodgers have won six World Championship titles, and the Cubs are most infamous for their cursed, 71-year World Championship drought, which finally ended in 2016. They play at Wrigley Field, one of the most iconic sports venues in Chicago, which holds up to 41,649 supporters, most of whom are still getting used to their team’s newfound success.

Sports coach Walter Camp is widely credited with developing American Football as we it know today, proposing changes to rugby in 1880. It developed into a professional sport over the ensuing decades, with the two rival leagues merging in 1970 to create the NFL.

Arguably the epitome of the American sporting calendar is the annual Super Bowl. The game is usually the most watched television event of the year, with 100 million Americans typically tuning in. Transcending sport itself, the Super Bowl is a cultural event in its own right; a single second of advertising at the last Super Bowl cost $166,667, and the halftime show is almost as anticipated as the game itself. Tens of thousands of viewing parties take place across the country, and aside from Thanksgiving, more food is eaten in America on Super Bowl day than on any day of the year.

Not only is the social side a large part of viewing the sport on television, but also significant for those attending the games; tailgate parties—essentially beer and barbecue sessions in car parks near to the stadiums before games—are a huge aspect of going to watch American football, and attract many casual fans to the sport.

There is also mass participation as soon as youngsters are old enough to play, with around 1 million high school students participating in their local or college teams. Similarly to baseball, for many the tradition of wearing the same colours as their parents or grandparents when playing for or cheering on their college team creates an intrinsically personal feel to the game. This will always ensure a fervent support of American football teams and drive interest in the NFL.

Invented by PE teacher Dr. James Naismith in 1891 by hanging a peach basket 10 feet above a gym floor, the first professional basketball league was founded just seven years later. College teams then led the way until the National Basketball Association (NBA) formed in 1949, remaining the world’s biggest basketball league to this day.

Basketball is not only one of the most popular sports in America, but it is also seen as vital in helping to establish a sense of belonging for African Americans in American society. In a society where they have been historically oppressed by segregation, racism, and a lack of equal rights, the sport has allowed African Americans to gain substantial social recognition, with figures like Michael Jordan, LeBron James and Steph Curry becoming significant role models.

Notable American basketball teams include the Boston Celtics, the Chicago Bulls, and the New York Knicks. Spearheaded by Michael Jordan, the Bulls’ era of domination in the nineties means they are regarded as the greatest basketball side ever. The Bulls won an unprecedented three consecutive World Series titles on two separate occasions during the decade.

Basketball is still popular in colleges today, much like American football, and its popularity in educational institutions is a major driving force for its cultural impact. Americans will watch avidly to cheer on their college’s and university’s basketball teams, whether they are current students or long time graduates. This always guarantees a huge interest, and the tradition at college level often translates to interest in the NBA.

Sport became the backbone of American life through a variety of traditions, from long standing family and college affinities, to being the focal point of various societal rituals. Such traditions ensure that sport is embedded in American culture, and that history will continue to repeat itself. The prominence of sports in American life from generation to generation therefore shows no signs of stopping.