St Albans City FC (nicknamed “The Mighty Saints”) was founded in 1908 and plays its home matches at Clarence Park stadium which is situated in a Victorian park, about 800 yards from the city centre, and a 5 minute walk from the City train station (which is just 18 minutes from Kings Cross – St […] 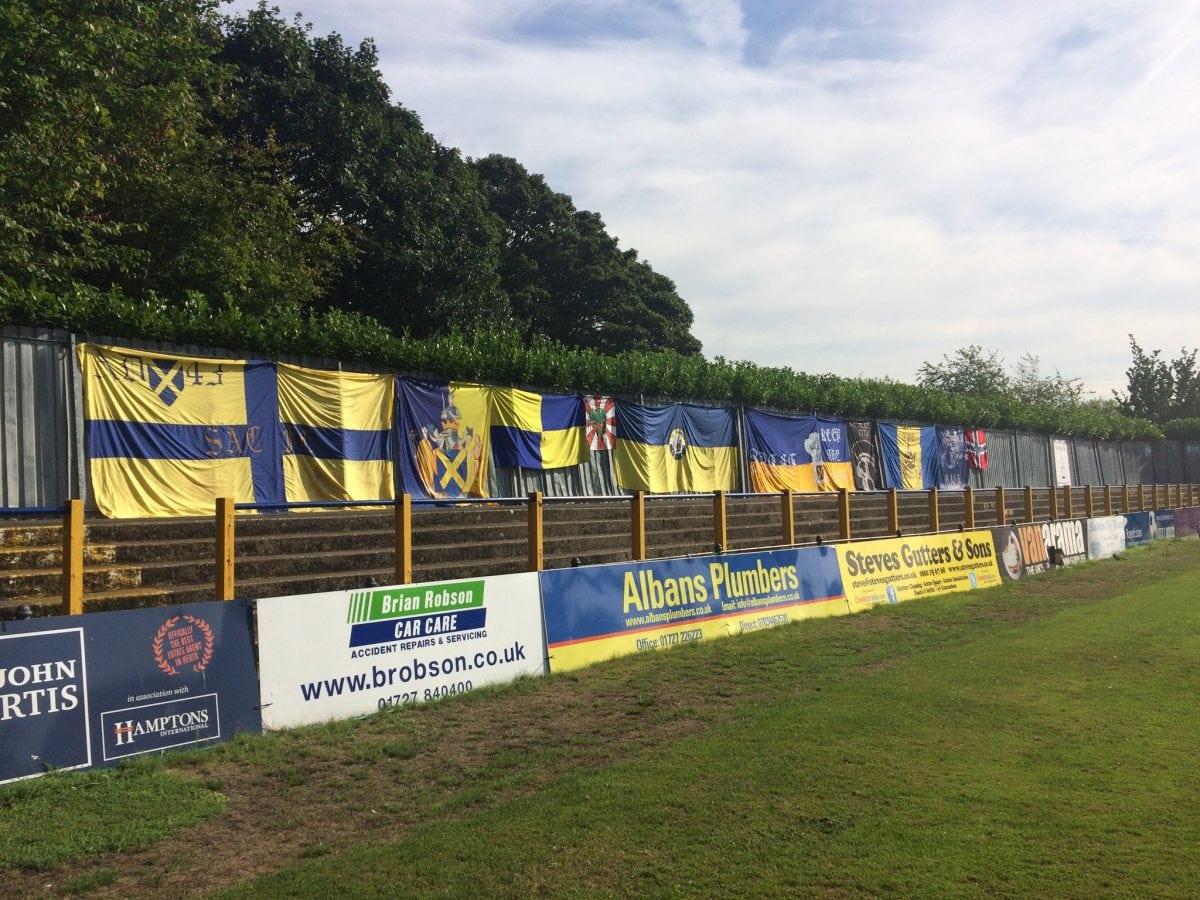 St Albans City FC (nicknamed “The Mighty Saints”) was founded in 1908 and plays its home matches at Clarence Park stadium which is situated in a Victorian park, about 800 yards from the city centre, and a 5 minute walk from the City train station (which is just 18 minutes from Kings Cross – St Pancras).

City’s most famous match was on 22 November 1922 in a fourth round qualifying FA Cup match. Having been held by Dulwich Hamlet to a 1-1 draw at Clarence Park on 18 November, the replay drew a crowd of 4,060 in a game that saw the Dulwich side win 8-7, the winning goal coming in near darkness at the end of extra time. What put the game in the record books was that City scored seven times, with all seven goals being scored by Wilfred Minter. His feat still remains as the highest tally by a player on the losing side of an FA Cup tie. Last season was truly a game of two-halves for the Saints as they had a good FA Cup run, culminating in an exciting 5-3 loss in the 1st Round to Carlisle United, and were sitting comfortably in 2nd place by the end of December. But then the side proceeded to hit a poor run of form that saw them drop down the table and they finished the season in 10th place. However, the introduction of some young, energetic midfielders towards the end of the season saw the Saints show signs of returning to the exciting attacking play seen earlier in the 2016/2017 campaign.

Manager and ex-Arsenal, Luton Town and Colchester United player, Ian Allinson, has managed to retain much of his squad, including experienced ex-professionals such as David Noble and Jamie Cureton, and has signed some exciting talent such as Zane Banton from Luton Town and Rhys Murrell-Williamson (ex-Welling United and ex-Dulwich Hamlet). Allinson’s team will be looking to play good, entertaining football and the manager will no doubt be aiming for his side to be in or around the play-off positions at the end of the new season. The admission prices for league games are:

* Matchday concessions include individuals over 65, unemployed and individuals with a valid season ticket for either a Premier League or EFL club. ID may be required. The ground has plenty of seating in the main stand and also a covered terrace in the East Stand. A clubhouse with bar is situated behind the main stand and a beer stall, manned by volunteers, is located at pitchside, outside the club shop, selling local ales, cider and bottles of lager. At the opposite end of the main stand is a catering van selling reasonably priced burgers, chips and soft drinks.