</a ></a >Sport News</a > 24/7 By Will Magee  @W_F_Magee  @TLE_Sport The London Economic continues its focus on non-league football with a visit to Dulwich Hamlet where Will Magee found the club ethos to be diametrically opposite to that of the Premier League. Over the last month, the Premier League’s reputation has surely reached a new low. […] 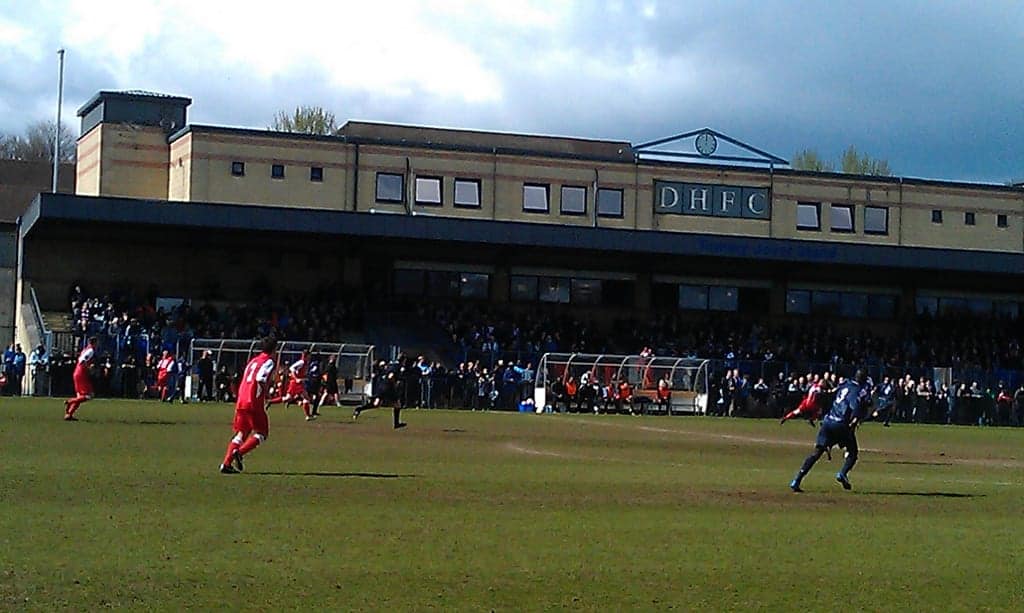 The London Economic continues its focus on non-league football with a visit to Dulwich Hamlet where Will Magee found the club ethos to be diametrically opposite to that of the Premier League.

Over the last month, the Premier League’s reputation has surely reached a new low.  Don’t get me wrong, it’s been deteriorating for much longer than that; soaring prices, despotic owners, leveraged buyouts, text message scandals and dire behaviour on the pitch are but a few of the things that have contributed to a general atmosphere of grubbiness in the top flight – grubbiness that’s been worsening for a decade or more.  However, the last month has been something else.  The last month has been the putrid cherry on the big, grubby cake.

First off, in mid-February, Premier League chief Richard Scudamore said that he wasn’t uncomfortable with hyper-rich top-flight clubs paying less than a living wage to their non-footballing staff; this in spite of a new £5.14bn television deal or, to put it another way, a gargantuan 70% increase in the Premier League’s already enormous broadcasting revenues.  Grubby.

Then, magnanimously representing the league abroad, several Chelsea fans were filmed physically barring a black commuter from getting on the Parisian Metro.  Nasty footage of racism (and vicious anti-Semitism) closer to home soon followed; in the aftermath of all this it transpired that, since the start of this season, Kick It Out have seen a 35% increase in reports of racist incidents in the Premier League.  The FA put their percentage at double that.  Very grubby.

Finally, last week, footage emerged showing Manchester United, Manchester City and Arsenal fans directing vocal, sexist abuse at Chelsea’s club doctor, Eva Carneiro.  As it turns out, to be a top female medic working in football you have to tolerate constant cries of ‘Get your tits out for the lads!’ and ‘Show us where you piss from, you slag!’ as you’re trying to do your vitally important job.  Don’t like the putrid attitude behind the insults?  Well, according to some, that’s just how the Premier League is.

With ingredients like greed, racism and misogyny, it’s perhaps unsurprising that so many people have now had their fill of grubby Premier League cake.  It’s unsurprising that so many average Premier League fans – fans who are perfectly well inclined toward underpaid staff, black commuters and women in stadia – have been made to feel deathly sick and acutely embarrassed by the whole thing.

It is, of course, the Premier League chiefs and those involved in top-flight chauvinism who should feel the embarrassment their attitudes have generated.  In fact, were they made to feel genuinely discomforted by the majority of normal men and women who watch Premier League football perhaps their attitudes might change.

As one (relatively) normal Premier league fan, I’d like to make a start on this front.  Though I’m an Arsenal fan myself, I recently started writing about non-league football; I’ve attended matches from the Conference to the Ryman League, visiting a variety of clubs and writing about the game at a very different level to that which I’m used to.  On my travels through non-league, I’ve been lucky to come across one particular club which has the potential to embarrass all those who’ve made the Premier League embarrassing – a club that puts the Premier League to shame.

Dulwich Hamlet play in the seventh tier of English football, at a small south-east London ground called Champion Hill.  A matchday ticket is £10, and shows no sign of rocketing in price.  The team are (mostly) well behaved on the pitch, while they actually play some good, progressive football.  On the terraces, the atmosphere is brilliant; ‘The Rabble’ – the club’s colourful, tuneful, hardcore supporters – drink beer and Buckfast, make noise, wave scarves and generally go ballistic; in that sense, they’re not much different from any other set of fans.

Where they differ is in their no-nonsense approach to the things which blight the multi-billion-pound league squatting six tiers above them.  Hamlet’s fans, mustered behind the Dulwich Hamlet Supporters’ Trust, have co-operated with the club’s hierarchy to take on almost every major issue of the modern game – and issues beyond it.  They have campaigned for the living wage for low-pay club employees.  They have campaigned against workfare.

As Scudamore was preparing to announce the Premier League’s broadcasting multi-billions, Hamlet used their home game against Grays Athletic to collect cash, food and general supplies for Southwark Foodbank while offering voluntary workers free admission.  In an open letter to the club, the Foodbank’s Project Manager Felicia Boshorin called the gesture ‘an encouragement to all who volunteer with us’.

The club have a recent history of co-ordination with anti-discrimination group Kick It Out, while anti-racist banners and signs can be seen all around the ground.  A week before footage of the Paris incident made headlines, Hamlet were working with Kick It Out, Unison and Hope Not Hate to make the last preparations for their charity friendly with Gay World Football Champions Stonewall FC; played with an inclusive, pro-LGBT agenda and with all profits going to the Elton John AIDS Foundation, this was as far from top-flight chauvinism as it could get.

Likewise, this Saturday, Hamlet invited women’s football teams and female journalists to attend their home game with VCD Athletic free of charge in an early celebration of International Women’s Day.  As the Premier League reeled from a sexism storm, Champion Hill welcomed a happily mixed crowd to watch a game and have a drink in the unseasonably warm sun.  A stark contrast.

As such, it seems no coincidence that Hamlet’s attendances rose 36% last season; plenty of those who make up this fresh influx of support are traditional Premier League fans.  When they arrive at Champion Hill, those fans know they can enjoy football at a club that has a fair attitude toward everyone.  In other words, what attracts them to watch Dulwich Hamlet as opposed to the world’s most lucrative division is that, at a forward-thinking club in south-east London, there’s nothing to be ashamed of.