Avid fans caught the 5.45am Italy vs Namibia game ahead of the opening Home Nation clashes of Ireland vs. Scotland and England vs. Tonga games on Sunday morning.

by Jack Peat
in Rugby, Sport 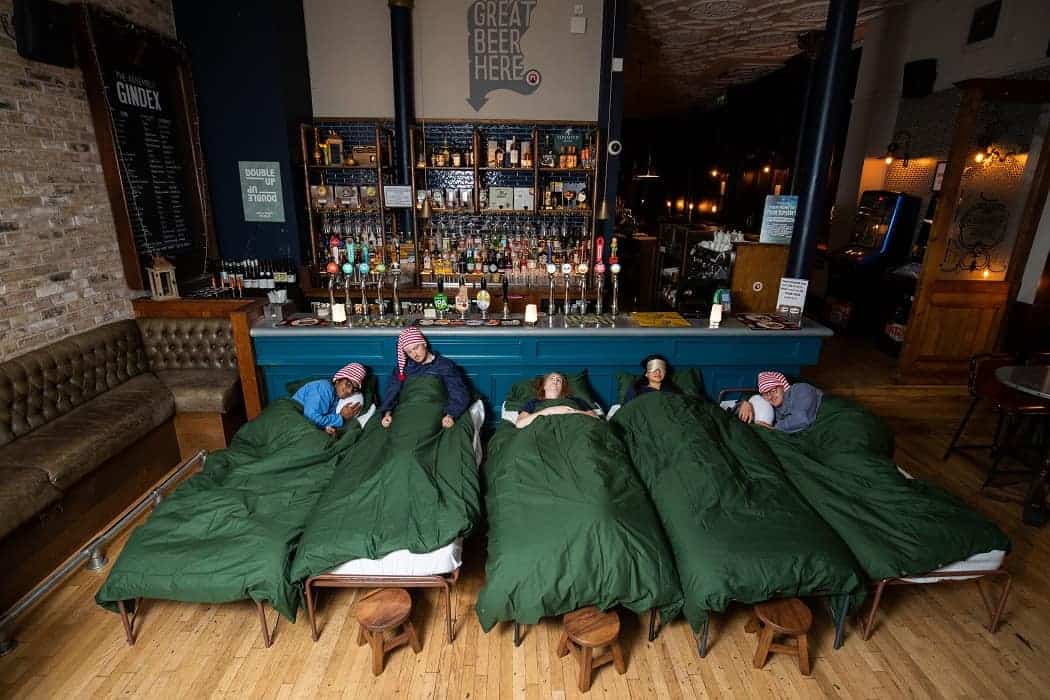 Punters at the Assembly House in Kentish Town were treated to a sleepover this weekend as the pub went the extra mile to accommodate for the early kick-offs in the Rugby World Cup.

With some games being screened live from Japan in the small hours of the morning, managed pub company and brewer Greene King turned one London pub into a makeshift dormitory, so rugby fanatics didn’t have to miss a match this weekend.

Avid fans caught the 5.45am Italy vs Namibia game ahead of the opening Home Nation clashes of Ireland vs. Scotland and England vs. Tonga games on Sunday morning, after grabbing a few hours shut eye on Saturday night … in the pub.

The pub was given a bedroom makeover, complete with beds, bedside tables and lamps, as well as all the essentials required for a good night’s sleep – a nightcap, an eye mask and earplugs.

The pub retailer and brewer, which has over 1,700 pubs across the country, set up the quirky rugby dorm for one night only, to celebrate the opening home nation games over the weekend.

Chris Conchie, head of sport at Greene King, said: “We know there’s nothing better than watching the rugby in the pub surrounded by other fans – you just can’t beat the atmosphere.

“With this year’s Rugby World Cup taking place in Japan, and some matches set to start as early as 5am due to the eight-hour time difference, we wanted to ensure that rugby fans didn’t miss out on the experience of viewing the games at their local pub.

“The pub dormitory went down a storm and was the perfect way to watch the early morning games.”

Key matches for the Rugby World Cup, including all home nation and knockout stage games, will be aired at more than 500 Greene King pubs nationwide.