With Mauricio Pochettino currently unemployed, there is a big name waiting in the wings to pick up the reins if Solskjær happens to fail. 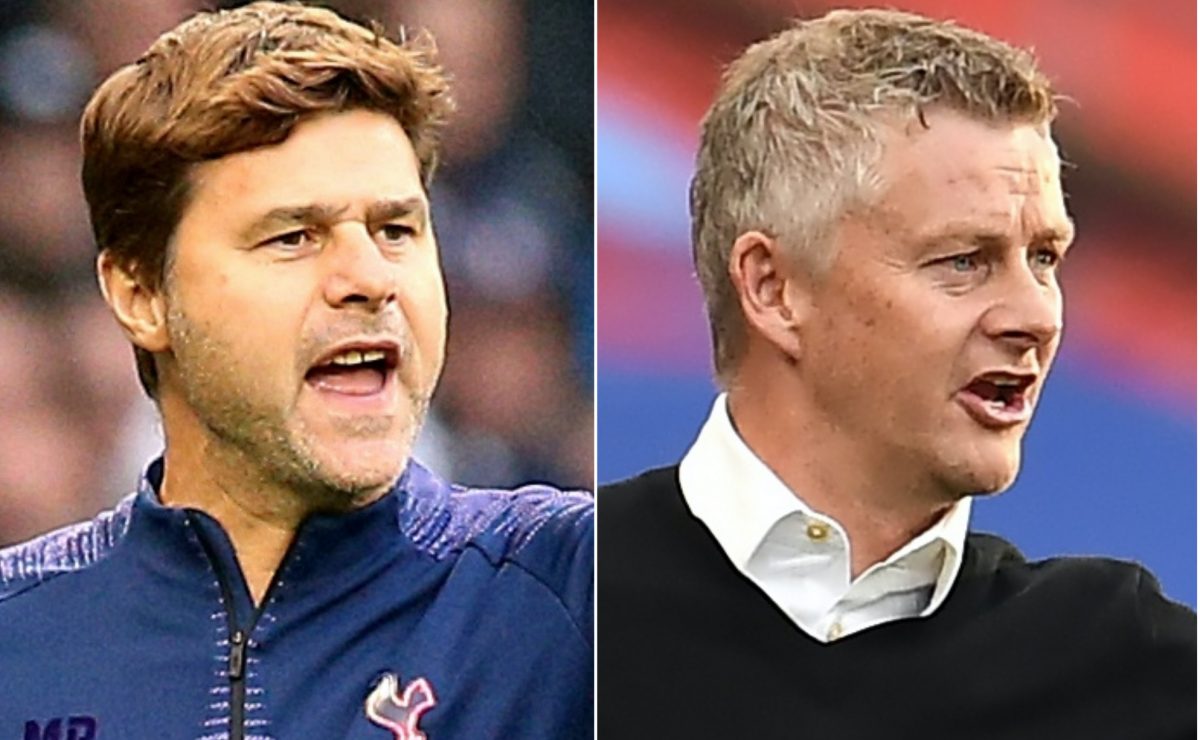 All is not well at Old Trafford at the moment.  After being the Premier League’s form team post-lockdown, two home league defeats in the opening three matches of the 2020/21 season and an unconvincing performance in the transfer window has heaped pressure on manager Ole Gunnar Solskjær and beleaguered executive vice-chairman (what does that even mean?) Ed Woodward.  With three transfer windows under his belt, Solskjær should have started to shape a team in his preferred image.  But has he succeeded, and what does the future hold for Manchester United?

Let’s be clear, the 6-1 defeat at home to Tottenham at the weekend was embarrassing, but this team is not in terminal decline.  You don’t go 14 games unbeaten in the Premier League one minute and become a bunch of hapless losers the next.  Nevertheless, the manner of the capitulation to Spurs was alarming, as was the ease with which Crystal Palace emerged victorious in their opening fixture.  Throw in an unconvincing, fortunate last-kick victory away to Brighton, and there must furrowed brows among United’s hierarchy.

United’s problem is that they have some big, unaddressed question marks over the makeup of their squad, and of certain individuals (and have done for a while).  This indecision has had an unsettling effect on the team’s on-pitch performance, and the slightly frantic transfer deadline day adds to the sense of unease around the place.  Contrast the Red Devils’ performance in the transfer market with that of Chelsea and Liverpool, who both identified targets and moved to sign them early.  Even with the last-minute signings of Edinson Cavani, Alex Telles, and young wingers Facundo Pellestri and Amad Diallo, plenty of issues remain unresolved within the squad.

For a time in the mid-2010s, Spaniard de Gea was regarded as one of the finest keepers in the world.  He was the winner of the Premier League’s Golden Glove award as recently as 2017/18 with a remarkable 18 clean sheets.  However, since then his form has plummeted, highlighted by high-profile errors against Watford in the league and Chelsea in the FA Cup semi-final last season.  Conversely Henderson, on loan at Sheffield United for the previous campaign, was one of the players of the season, and a big reason for the Blades’ exceptional top 10 finish.  Intriguingly, Henderson returned to his parent club and signed a new contract on the promise of regular first-team football.  So far this season, de Gea has played all three league games and conceded a total of 11 goals.  Henderson kept a clean sheet in his only appearance against Brighton in the EFL Cup.  How long will Henderson’s patience last?  As long as United’s defence remains leaky, questions over the goalkeeper position will remain.

Speaking of defence, I will resist the temptation to go the full Alan Hansen on United’s backline, but their poor start to the season has done nothing to silence the sceptics.  I keep hearing that a new central defender is required, but a quick glance at the United squad shows that they are awash with centre-backs.  Unfortunately, they’re just not very good.  Phil Jones (remember him?) and Marcos Rojo are still on the books, no doubt picking up a hefty wage, and Eric Bailly (starting his 5th season at the club) has failed to cement his place in the first team.  Victor Lindelof and Harry Maguire formed a good partnership last season, however the England man’s adventures on holiday in Mykonos seem to have affected his on-pitch performance.  Those five defenders cost a grand total of £172m, so you can see why the number-crunchers at Old Trafford are reluctant to splash any more cash.  A new centre-back is definitely required and failed to arrive this summer, but one feels that the deadwood (Rojo and Jones) will need to be moved on before any funds and squad space become available.  And if Rojo and Jones are on good contracts, why would they move elsewhere and jeopardise their earnings?  A ray of sunshine has arrived in the form of attacking left-back Alex Telles from Porto, who has an excellent scoring and assisting record, although it would seem that United should prioritise defenders who can actually stop goals rather than scoring them.

We need to talk about Paul

He is the midfield enigma that continues to divide opinion.  Brilliant one week, anonymous the next.  At his best, Pogba is almost unplayable: his passing can be excellent, when he extends those long legs of his it is impossible to dispossess him, and he has a pretty decent shot on him too.  Yet, his best is seen all too rarely.  When a club pays £90m for a player, there is a correspondingly high expectation.  As a central midfielder (his most effective role is still yet to be determined) Pogba should be the talisman, the leader to drive United forward and whilst he does so on occasion, for £90m occasionally isn’t really good enough.  For that fee, there is a demand for a level of consistency and determination, such as that displayed by Kevin de Bruyne or N’Golo Kante, which Pogba is unable to offer.  In some games he seems to lack motivation and strolls around half-heartedly, before throwing his toys out of the pram when someone has the temerity to press or tackle him.  Add to that his occasionally disruptive behaviour (remember his influence in getting Mourinho fired?) and his mysteriously long injury during the first half of last season (while his agent was making overtures towards clubs on the continent), and you have to ask what Manchester United are really getting with Pogba?  Solskjær has so far avoided confrontation with the Frenchman, but could the reality be that the Red’s are better off without Pogba?  At 27, he still has re-sale value, but it would represent a significant embarrassment to the club, who paid a then-world record fee for him and announced his return to Old Trafford with such fanfare.

I’m going to put a controversial opinion out there – I think United made the correct decision in not signing Jadon Sancho.  I’ve read that the total outlay on him, including transfer fee, agents fee, contract and bonuses, would have been £227m.  A quarter of a billion pounds!  Even though he would improve United’s attack, that’s an incredible amount of money for a player that is relatively inexperienced at the very highest level.  Even for a club like Manchester United, those figures are unmanageable financially, especially in the current climate.  There’s a school of thought that if you’re going to sign a new player, it should be the best available regardless of the price, rather like Liverpool with Virgil Van Dijk.  Sancho is an excellent player, no doubt, but a quarter of a billion pounds?  There is an element of risk as he certainly isn’t the finished article, and do United want to spend such money on a player when he might not develop into a world-class player?

They also wisely passed on the option to sign Ousmane Dembélé on loan or permanently.  A return of 19 goals and 16 assists in three injury-hit seasons at Barcelona does not represent much return on a €105m+ outlay.  United have been burned before in taking the cast-offs from continental giants such as Angel di Maria, Radamel Falcao and Bastian Schweinsteiger and they often end up paying inflated fees for new signings as selling clubs know they have deep coffers.  So whilst they probably do need a right-sided attacker, an injury-prone player with questionable recent form at high expense is not the answer.

Uruguayan free agent Edinson Cavani was eventually brought in, not a right-sided attacker, but a centre forward.  There are pros and cons to this signing.  The club are getting a proven goalscorer at the highest level who can act as the focal point of the attack in a traditional number nine role, something that, Odion Ighalo aside, United lack.  Even though his agent’s fee was rumoured to be around £10m (why do clubs pay such ridiculous rates for agents?!), Cavani is a relatively low-risk signing financially and the hope is he will make an instant impact on the pitch for the next couple of seasons, rather like Zlatan Ibrahmovic in 2016/17.  On the other hand, Cavani’s recent fitness record is questionable – he spent a significant amount of time out injured for PSG last season – and consequently he hasn’t played football for 6 months, further complicated by Coronavirus.  He is also not the most mobile forward so it remains to be seen whether he can stand up to the rigours of the English top flight.  And whilst Cavani’s addition adds experience, which he can pass on to a relatively youthful forward line, his presence could mean outstanding prospect Mason Greenwood’s playing time is limited.

Being Manchester United manager is never an easy task, particularly where so many have attempted to follow Alex Ferguson and failed.  Even so, this season looks set to be a particularly challenging one for Ole Gunnar Solskjær.  Finishing in the top four is a must and whilst overtaking neighbours Manchester City and Liverpool might be a step too far, narrowing the 33 point gap to the leaders would represent progress.  Additionally, qualification for the knockout stages of the Champions League is probably a minimum requirement which, from a group containing recent runners-up Paris St-Germain and semi-finalists RB Leipzig, is a very tough ask.

Despite having three transfer windows to mould his team, it still doesn’t quite feel like Solskjær has got it.  I think he needs to be a little more decisive and a slightly more ruthless as a manager.  There are a lot of big characters in the Manchester United squad and Solskjær is doing a particularly impressive juggling act in trying to keep everyone happy.  Yet, the concern remains that some of the above issues have been festering for a while and are still not resolved.  If the gaffer doesn’t get results on the pitch soon, these problems could bubble to the surface pretty quickly and place the likeable Solskjær’s job in jeopardy.  And with Mauricio Pochettino currently unemployed, there is a big name waiting in the wings to pick up the reins if Solskjær happens to fail.