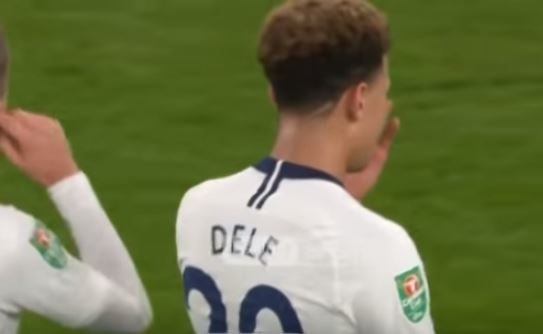 Video footage from last night’s north London derby is being analysed by police and Arsenal officials in a bid to identify who threw a bottle at Spurs star Dele Alli.

The England international, 22, was struck on the side of the head in the 73rd minute by the missile thrown from the stands during Tottenham’s Carabao Cup win at the Emirates Stadium

Alli then gestured the ‘2-0’ scoreline to the crowd, before being led away by Spurs skipper Harry Kane.

He had earlier scored the second goal to take Tottenham to a 2-0 victory and place in the semi-finals of the cup for the first time.

A Spurs fan was arrested and charged after throwing a banana skin at Arsenal striker Pierre Emerick-Aubameyang during the previous north London derby just 17 days ago.

The Tottenham Hotspurs fan responsible was fined and banned from football for four years on Tuesday.

Scotland Yard confirmed that seven people were arrested for various offences, including possession of drugs, during last night’s match, but the thug who threw the bottle is still being sought.

Speaking after the match, Alli appeared claimed the bottle incident made his goal “sweeter”.

He also posted an image on Twitter of him gesturing the scoreline to the home fans.

Spurs boss Mauricio Pochettino, linked with taking over at Manchester United on a permanent basis at the end of the season, called on Arsenal to find the culprit.

“In a different country, maybe they close the stadium for a few games,” said Spurs manager Mauricio Pochettino.

“It’s lucky it wasn’t a big problem but I think people need to be careful, and we need to try and avoid this type of action. Some people behave very bad.”

He added: “For me, okay we play a derby and we hate each other in a good way, but that is in a bad way when you go to damage some people or an opponent.

“I cannot talk in general because only one stupid person made a mistake.

“For one you cannot talk about everyone.

“I hope that Arsenal take responsibility and through the camera they can identify because it wasn’t a problem but it can happen to be a big problem.”

A Met Police spokeswoman said: “We are working with Arsenal Football Club to identify the person responsible for an incident where a bottle was thrown onto the pitch during the Arsenal versus Tottenham match.

“There has been no arrest in relation to that specific incident.

“Seven people were arrested as part of the policing operation for the match for a variety of offences including possession of drugs; public order and assault on police.”

Spurs have been drawn against London rivals Chelsea in the Carabao Cup semi-finals, while Manchester City will host League One Burton Albion in the other tie.