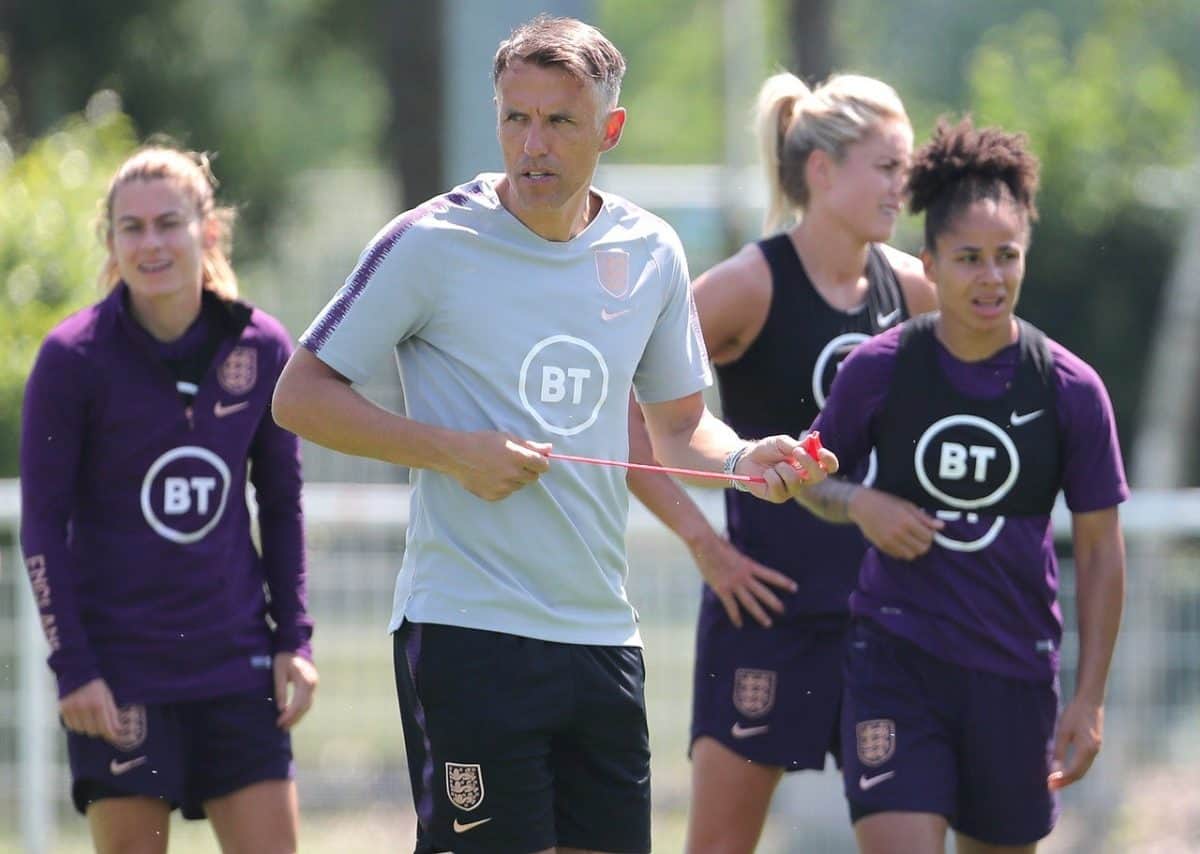 Bemused England boss Phil Neville has laughed off a visit by members of the United States staff to his team’s hotel ahead of the Women’s World Cup semi-final showdown between the sides.

Team USA backroom staff were found wandering around the private area of the Fourviere Hotel where the England team are staying ahead of Tuesday’s World Cup semi-final in Lyon.

None of the group were wearing USA tracksuits or identification when challenged as Phil Neville and the team were out training.

Jill Ellis’ reigning champions and Neville’s hopefuls meet in Lyon on Tuesday evening, but it is understood a representative from the USA camp visited the team’s hotel in a reconnaissance mission ahead of next Sunday’s final.

“We’re happy with our hotel. We were training, so I hope they enjoyed our hotel. But it’s not something that we’d do, send somebody round to another team’s hotel.England head coach Phil Neville is not concerned by the surprise visit of USA officials to his team’s hotel (Richard Sellers/PA)

“It’s not an unfair advantage. It’ll have no bearing on the game. I actually found it quite funny, I just thought, ‘What are they doing?’ It’s not etiquette really, is it?.”

England go into the game with a full squad from which to choose and high hopes after drawing with the Americans in March on their way to lifting the SheBelieves Cup.

Neville said: “You go to tournaments to win. I said earlier in the week about semi-finals – nobody cares who loses in a semi-final, it’s all about winning and my players now want to win, so if we don’t get the right result, we will be disappointed.

The semi-finals are coming. And we can’t wait. #Lionesses pic.twitter.com/PNqA9UI4FU

“We will feel the disappointment and we’ll see that as a failure – and that’s not me being negative, that’s just our expectation, and our belief and our confidence now and our mindset is about winning.”

Skipper Steph Houghton, part of the side which missed out in agonising fashion in the semi-finals four years ago, is hoping England’s fitness – something which was remarked upon by tennis great Serena Williams after she had watched the Lionesses train earlier in the tournament – can be a potent weapon this time around.

Houghton said: “It’s been documented well that Serena was at our hotel and a few of the girls were fangirling her. She’s an icon of women’s sport and rightly so.

“She’s won so many medals, so many trophies, best tennis player in the world and for us to see her train as well on the court was an unbelievable experience that nobody really gets the honour of doing.

“For her to say that about us is amazing for this squad. That’s what we want to pride ourselves on, the hard work, the ability to be one of the fittest teams in the world and to be really humble in everything that we do, so for someone of that calibre and so much status to say that about me and my team-mates is unbelievable and I’d like to thank her for that.

“In terms of our fitness as a team in comparison to 2015, the game has moved on so much since then. For us, fitness is a priority to be competing against the best teams in the world – and we are one of them – and we have shown over this tournament that we can go toe-to-toe with anyone.

“Against the USA on Tuesday, it’s going to be our physical attributes that could potentially win us the game.”