A study has revealed which Premiership club’s fans travel the furthest. And as you might expect, it’s the loyal Toon army getting in the mileage from the North East. Howay the Lads! Newcastle United are known to have some of the loudest and best fans in the League, but according to new research, they also […] 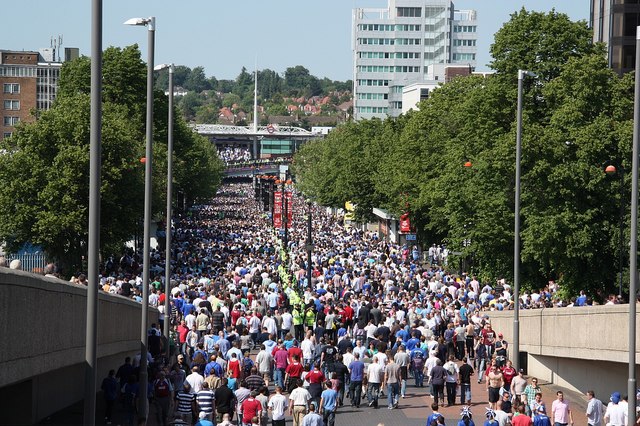 A study has revealed which Premiership club’s fans travel the furthest.

And as you might expect, it’s the loyal Toon army getting in the mileage from the North East. Howay the Lads!

Newcastle United are known to have some of the loudest and best fans in the League, but according to new research, they also travel the furthest distance during a season for away games. The Toon Army travel a whopping 4,579 miles per season, averaging at 241 miles per game, which costs around £962 in fuel per year. Their longest journey is to AFC Bournemouth, which is 353 miles away.

Cardiff City fans take second place in the table for most dedicated fans – travelling an incredible 3,444 miles per season to see their team win or lose in the Premier League. Costing £723 in fuel, the Bluebirds clock around 181 miles per game, with their longest journey being to Newcastle United at 317 miles.

AFC Bournemouth is third with a total mileage of 3,359 miles per season to see all their away games. From the south west of England to the northeast, visiting Newcastle United is also their longest journey at 353 miles. Costing around £705 in fuel costs per year, these fans rack up to 177 miles to see The Cherries play.

With the Premier League often being looked to as the pinnacle of sporting football competitions, fans outside of the division are often overlooked despite having some of the most dedicated fans overall, according to teh research carried out by Crusader Vehicles.

League One’s Plymouth FC fans travel over 6,000 miles per season, more than Newcastle United in the Premier League. The fans clock up to 262 miles per game, with their longest journey being to Sunderland – an incredible 406 miles away. Their dedication and loyalty cost them around £1,267 in fuel each year.

Barrow in the National League clock up to 5,491 miles in a season, costing them £1,153 per year. In rain or shine, The Bluebirds fans average around 239 miles per game, with their longest game being 367 miles away to play against AFC Fylde.

Also National League contenders, Gateshead FC fans travel 5,388 miles per season, clocking up to 234 miles per game. Spending £1,131 in fuel costs to chant in the away stands, their longest journey is to Hartlepool which is around 346 miles.

Football is an internationally loved sport and not only are the UK’s fans travelling far and wide to see their teams play. The Russian team, Zenit St Petersburg have to travel 10,906 miles in a round-trip to play SKA-Khabarovsk. Being the largest country on Earth and having some of the extremest weather conditions, fans usually see four goals per fixture – making that entire trip worth it.

The United States’ Orlando City fans have to travel 6,418 miles in a round-trip to play the Vancouver Whitecaps in Canada. This North American clash also sees around four goals per fixture. Whilst in South America, Brazil’s Internacional fans have a long trip of 5,234 miles to visit Ceará, with fans expected to see only two goals per fixture.

Fans across Asia also make some of the longest trips, with the Chinese team, Guangzhou Evergrande travels 3,838 miles in a round-trip to play Changchun Yatai – scoring just under 2.5 goals per fixture. India also has a growing football community, with Delhi Dynamo fans travelling around 3,326 miles in a round trip to play against the Kerala Blasters.