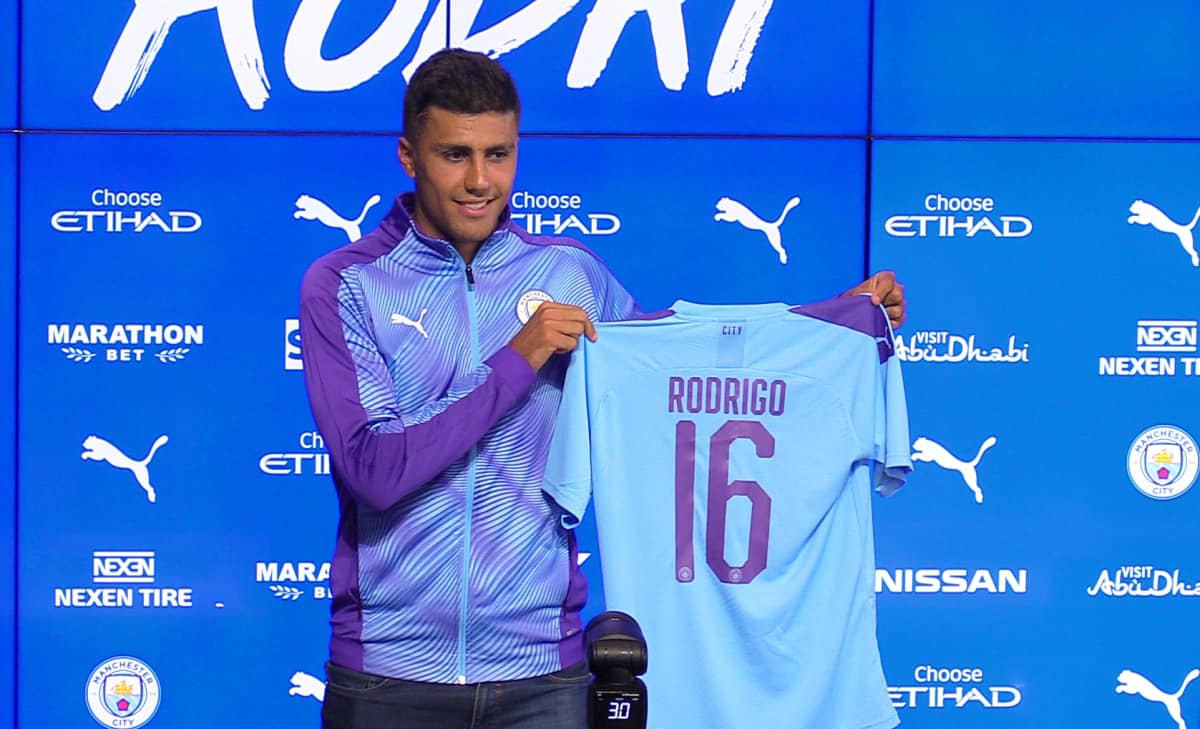 Manchester City's Rodri poses for photographers during the press conference at the City Football Academy, Manchester.

Rodri claimed Manchester is “becoming more blue” as he was officially unveiled as Manchester City’s record signing on Thursday.

The Spain international made the remark when explaining why City had become a bigger draw than Manchester United for top players.

In previous years, Manchester United were the area’s biggest attraction for top players, but Rodri feels that is changing with City now a powerful force.

The 23-year-old said: “I think City, this last five or six years, have changed the story of football here, not only in Manchester but the whole of England.

“I love the city, I love Manchester. I talked with some guys and I think it is becoming more blue.

“I chose City because of the football challenge and the way these last two years they have won lots of things. That says this team is growing every year.”

Under the guidance of Pep Guardiola, City have won back-to-back Premier League titles, with last season’s success coming as part of a domestic treble.

Rodri is relishing the chance to work under the inspirational former Barcelona and Bayern Munich boss.

He said: “I think he is the greatest coach in the world and that is what made me come here.

“I want to learn and grow as a football player. I am very young, I have lots of things to do, to grow, to learn and I think with this coach, Pep, I am going to grow here.”

Rodri, speaking at a press conference at the City Football Academy, looked comfortable in his new surroundings and conversed in fluent English, a language learned when travelling the United States before his football career began.

A year ago, Rodri joined Atletico from Villarreal for about a third of the cost City have just paid for him, but the fee does not bother him.

He said: “For me it is just a number. I don’t like talking about money. I am a footballer, playing football. I like people only to ask me about what I am doing on the pitch.”

Rodri, who has been compared to Barcelona’s Sergio Busquets, ends City’s long search for cover for 34-year-old Fernandinho in the defensive midfield position. He recognises he will have to fight hard for a place in the team.

“Here are greatest players in the world, so I am going to work all day to say, ‘Coach, I am ready to be in that position’. I know I am going to fight every day,” he commented

The next challenge for City, after last season’s clean sweep of domestic trophies, is to win the Champions League.

Rodri is convinced the team can claim Europe’s top prize in the near future.

He said: “City have achieved an awful lot and what they have won in England is fantastic.

“I think they are just a small step away from reproducing that in Europe. It has always been a dream of mine to win the Champions League and I don’t think we are far away from achieving that.”