The lucky fan was presented with the cheque by the former Wolves and England star at Molineux Stadium yesterday.

by Ed Chatterton
in Football 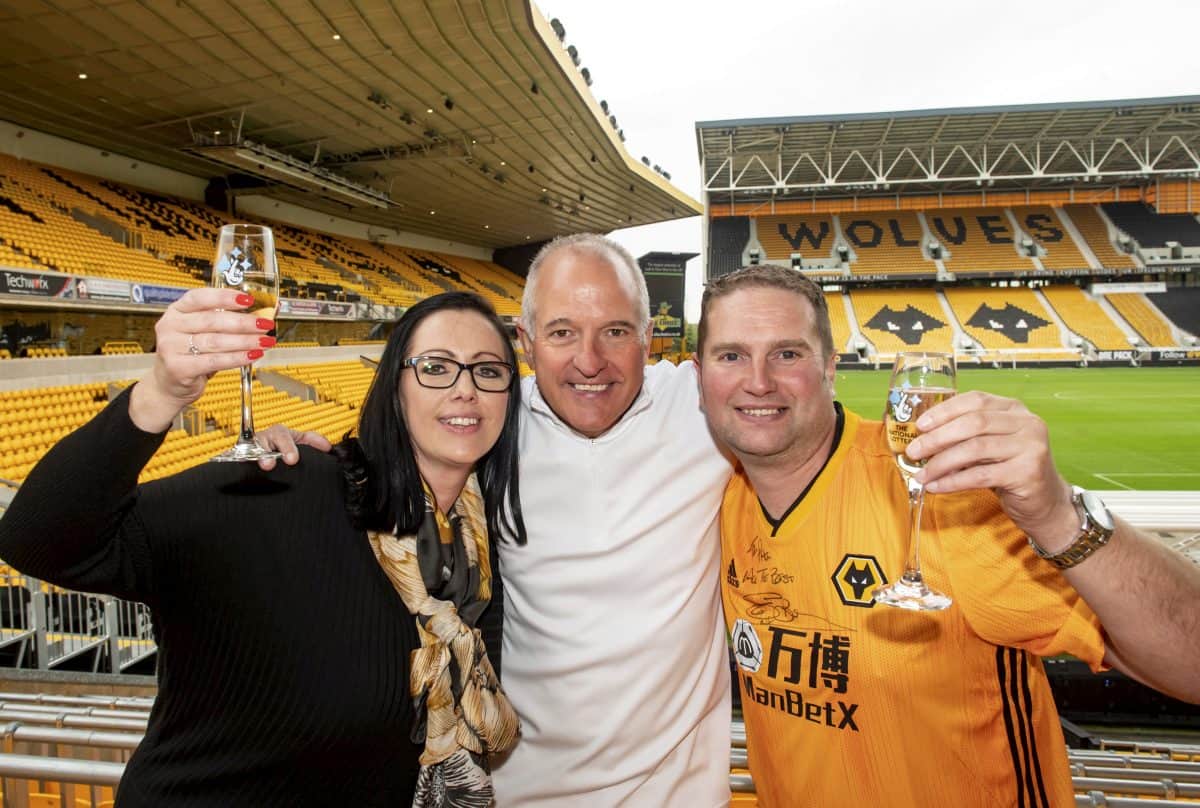 Footie legend Steve Bull helped a lucky Wolves fan celebrate his SECOND lottery win in under month – after he netted the top £300,000 prize on a scratchcard.

Paul Harrington, 43, was over the moon when he scooped a grand on the National Lottery game at the beginning of the month.

But just 21 days later the football-mad bricklayer was left stunned after he bought the same scratchcard again and landed the top prize.

Paul celebrated by taking his partner Julie Hulett, 43, to his caravan in north Wales – but now plans to splash out on more luxurious holidays in future.

He has also vowed to carry on getting a National Lottery Cashword VIP Black Scratchcard every day in the hope of sealing a hat-trick of wins.

“Once the news spread everybody started chatting to me and messaging me.

“It was great. After the call to The National Lottery I even got to go home early.

“I still buy my paper every morning and I still buy the two scratch cards the same. That’s still my routine.

“So maybe I’ll get a third win and land the hat-trick.”

Paul had his first success when he bought his usual £3 scratchcard and paper when he arrived early for a doctors appointment on August 30.

He said: “I scratched the card while in the waiting room and realised I had won a grand. I suddenly felt a lot better.”

The second win happened when he was at work in Coventry having bought the card from a Tesco Express store in Walsall, West Mids., on September 20.

He added: “I bought a paper on the way to work and also bought another National Lottery Scratchcard.

“My colleagues and I left the office around 7:30am and drove to Coventry where we were working at the time.

“We stopped at a service station to get some fuel and I scratched the card. I wasn’t sure but I initially thought I’d won another £1,000.

“We then went to the Travis Perkins near the site to collect some materials and I checked the scratchcard again and realised I had won big.

“I immediately told my boss then called The National Lottery.”

After the second win he locked the winning ticket in his safe and took a trip with childhood sweetheart Julie to their caravan in Abergele for a weekend break.

He said: “It was a bit strange driving up and staying there, like we had done so many times before, but this time knowing you have just won £300,000, I can definitely recommend it.”

Paul has said that he will look to invest in property with his winnings, but is also planning a winter holiday to New York to do some Christmas Shopping.

He will be hoping for another victory tonight to round off a lucky few weeks, as Wolves take on Besiktas in Turkey in their Europa League group match.

Julie added: “It’s amazing isn’t it. It couldn’t happen to a better person. He’s such a good person. We are still waiting on the third win.”

Former Wolves and England striker Bull said: “You’ve got to have a bit of luck in this world and the lottery provide that luck to some people and I think it’s absolutely brilliant.

“If you don’t buy a ticket you won’t win. His win is like lightning striking twice. It’s absolutely brilliant. The lottery is good for people.

“I think it’s unbelievable. It will change the rest of his life.

The £300,000 Cashword VIP Black Scratchcard, from The National Lottery, offers a 1 in 3.78 overall chance of winning a prize.