A diehard Sheffield Wednesday fan has put aside club rivalries and had a tattoo of his club’s ARCH RIVALS on his chest to support a brave 16-year-old schoolgirl with cancer. Kevin Ryder, 29, had the “outrageous” idea to get an inking of Sheffield United’s logo to encourage donations for teenage Blades fan Imogen Ellis – […] 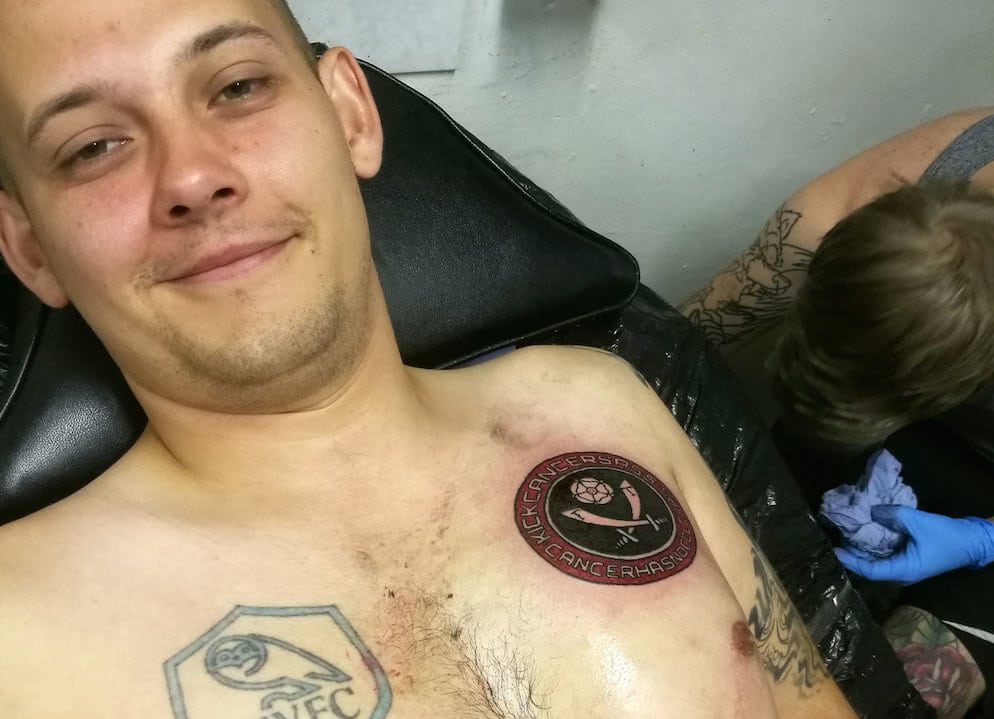 A diehard Sheffield Wednesday fan has put aside club rivalries and had a tattoo of his club’s ARCH RIVALS on his chest to support a brave 16-year-old schoolgirl with cancer.

Kevin Ryder, 29, had the “outrageous” idea to get an inking of Sheffield United’s logo to encourage donations for teenage Blades fan Imogen Ellis – who is battling a rare form of bone cancer.

Courageous Imogen, 16, who has had her right leg amputated from the knee down, contracted Ewing sarcoma last year – a condition that affects fewer than 30 children in the UK a year.

Inspired by meeting the brave schoolgirl after a charity walk, Kevin said he took the brave decision to accompany the Wednesday badge on his chest with a new tattoo of his arch rivals crest.

Kevin, a warehouse worker, said: “A friend of mine organised a sponsored walk for Imogen and when we finished she presented a medal to me and it made my day.

“I remember wishing there was something more I could do.

“When I was taking care of my own daughter, watching her play and run about, it made me think if it was her in that situation, it would break my heart.

“So I thought, ‘what can I do that’s insanely stupid, but helpful?’

“Then I thought of this.”

He came up with the plan around a month ago and decided the idea was perfect because of her love of Sheffield United and the fact they are Wednesday’s arch rivals.

Kevin, who has been a Wednesday fan all of his life, added: “The tattoo was just something outrageous, that not many people would have the bottle to do.

“But what is a bit of ink compared to what the poor girl has to go through on a daily basis?”

Imogen, a keen horse-rider, hockey and netball player before her illness, said: “NHS legs are good but my parents want the best you can possibly get, I think it is their way of helping me get over it.

“I was a really sporty person and then I started to get aches in my knee.

“I have been trying to carry on as normal as possible, throughout it all.

“Some days I do have my down days. But I try to carry on doing things that I did before.

“It is really difficult when I am on chemotherapy because some days I can’t actually get out of bed.”

Kevin said that he has had a huge response from both sides of Sheffield since the idea came about and is hoping to raise more money now that he has had the “bottle” to have it done.

He added: “The Facebook post of my tattoo went viral and honestly the support from both United and Wednesday fans has been brilliant, everyone has come together.

“People have told me that I have a small brain but nuts, they can’t believe I’ve had it done.

“I just hope we can raise as much money as possible for Imogen.”

To donate go to https://www.gofundme.com/43q0tpc