The record attempt is set to end on Saturday at 4pm, but in the meantime, the players are grateful for all the support they can get. 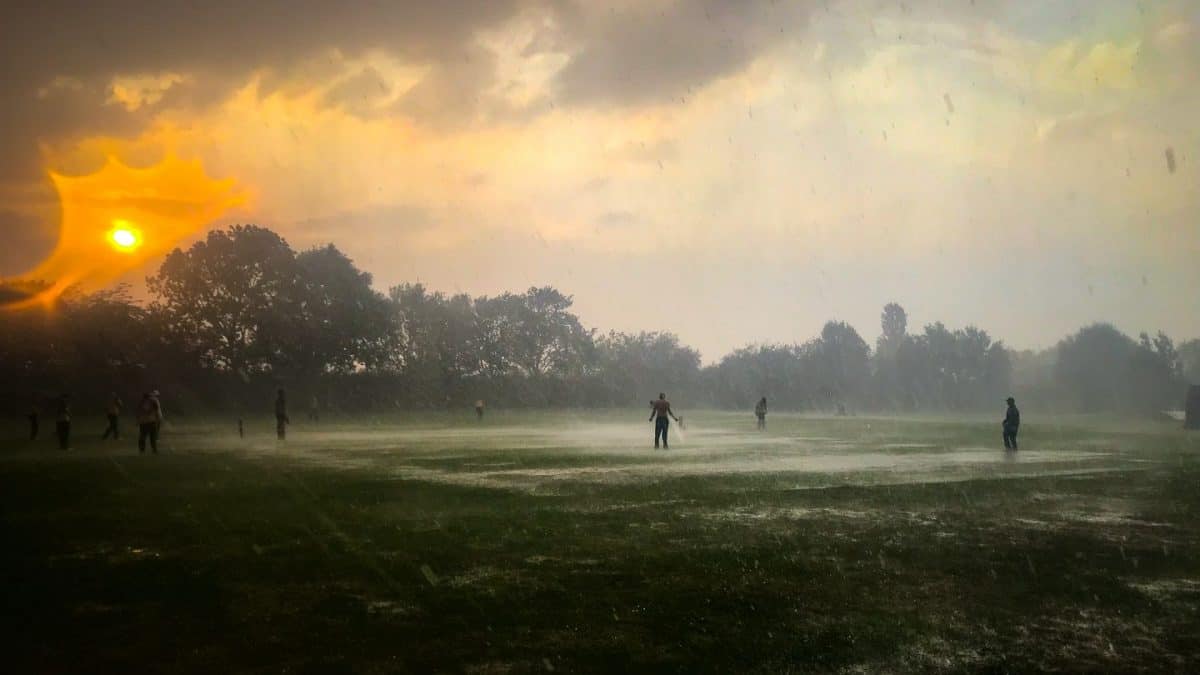 Cricketers had to battle through torrential rain in their attempt to set a new world record by playing for 168 hours straight.

Players from Blunham Cricket Club in Bedfordshire are attempting to set a record for the longest cricket marathon by playing for seven straight days.

But they have not been helped out by the weather.

On Sunday, Blunham was one of the hottest places in the UK as temperatures touched 32C, while Tuesday brought torrential rain that left parts of the outfield submerged in water.

Our feet were just swimming

Organiser George Hutson told the PA news agency: “Fortunately for us, it was 20 minutes long, but it was a hell of a lot of rain in 20 minutes. It flooded the pitch, our feet were just swimming.

“It was an amazing experience. You’re never going to play cricket in anything like that again.”

Mr Hutson, 25, and his fellow players were grateful to the club’s ground staff, who worked to mop up the water on the pitch between balls as the rain fell.

He said: “Every day it’s been so busy, they’re cheering us on. During the storm, we had 22 people playing and then we had 50 people who’d come to watch holding up gazebos for us.”

Finding time to sleep is a challenge

Should they be successful, it will be the third time Blunham have held the marathon cricket Guinness World Record.

They have previously played for 56 hours and 105 hours, but the mark they are trying to beat – 150 hours and 14 minutes – was set by Loughborough University Staff Cricket Club in 2012.

Under the rules, each team must bat for three hours before the players get half an hour’s rest – so finding time to sleep is a challenge.

“When you’re batting, if you’re not opening you get time to nap there,” Mr Hutson said on Thursday afternoon.

“So you just hope your opening bats can last their three hours so you can get a little bit of a rest, but it doesn’t work like that every time.

While they play, the cricketers are raising money for two charities – nearby St John’s Hospice and Mind – and the local sporting community.

Even though the week is proving “physically and mentally gruelling”, Mr Hutson said there have been some moments of quality on the pitch.

“One player, David Garofalo, scored a double hundred,” he said.

“We’ve had some really, really good catches in the slips, considering we’re all so tired. You’ve got players diving to the left and to the right.

“And some interesting shot selections – just to pass the time really, we try to emulate professional cricketers, so we’ve got people playing the Kevin Pietersen switch hit and the Jos Buttler ramp shot.”

On our feet for over 20 hours a day

The record attempt is set to end on Saturday at 4pm, but in the meantime, the players are grateful for all the support they can get.

“We’re in bits. But we’ve had volunteer physios come down, masseurs, people from the village – they’ve all been helping. It’s been great.

“The community are keeping us going.”

Donations can be made at https://justgiving.com/fundraising/Connor-Heaps1

Related: All change at The Oval as it opens its doors to a new cricket season