Two wickets in three balls turned what looked like a nailed on draw into a Middlesex win. 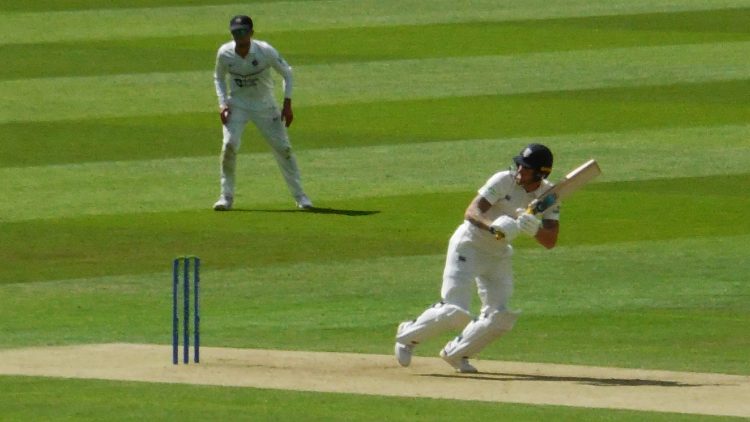 Durham’s batsmen gave them an early advantage, but Middlesex fought back and the first day finished even. The match continued fairly even up until the last hour on the third day, when Roland-Jones’ three-wicket burst left Durham at 25-3, 47 behind. While it was taking Middlesex an hour and three quarters on the fourth morning to take the fourth Durham wicket the game seemed to be heading to a long-anticipated draw, but then two wickets in three balls, the second of them Stokes’, brought the game alive again.

1. The decision to bowl first on a pale-coloured pitch on a sunny day with a short downhill boundary on the Tavern side had seemed counter-intuitive. It seemed no less so at lunch when Durham were 81-1 off 31 overs. During lunch there was excited chatter as to what havoc Stokes, he of the recent 17 sixes in an innings, might inflict on such a pitch with that short boundary later that day.

2. The answer turned out to be not much: he hit two fours and some fresh air before holing out tamely to deep mid on off the leg spinner – fair play to Middlesex’s skipper, who was playing his final game for the county, for keeping his young leggie on. In test cricket recently Stokes has played himself in, often quite laboriously, before cutting loose. Here he went after the bowling from the start. Confidence, impatience, complacency or a deliberate game plan? Second time round, he was out second ball.

3. A few years ago, when he was banned indefinitely by the ECB, Stokes walking out to bat as Joe Root’s successor as England captain to a rousing reception from a Lord’s crowd would have seemed preposterous. But so it came to pass. He got a huge cheer every time he came on to bowl, too. Durham picked five seamers, and Stokes was the last to be given a bowl. He bowled with hostility at 80mph or just under, only one or two mph more than 35-year-old Chris Rushworth was recorded at.

4. A short boundary – sufficiently so that when Eckersley pulled a long hop one bounce to backward square on the boundary he was unable to take a single – is typically seen as a problem for the fielding side. But Middlesex tried to use it to their advantage against both Eckersley and Trevaskis, posting three men on the hook and trying to tempt the batsman. But then Middlesex are experienced at playing championship games with a short square boundary, as the central pitches at Lord’s are mainly reserved for international and Hundred games. Robson and Holden were both adept at milking this boundary when they batted.

5. Toby Roland-Jones had a wicket-laden four-test career in 2017. With England running short of fit bowling all rounders, now was a handy time to remind everyone of his prowess with a five-for in the second innings giving him a 10-for in the match. Even more handily it was the wicket of the England captain, superbly caught by Robson, that got him to his five-for.

6. This was a good cricket wicket. It had looked that the match could be set up to be a batting-fest. However there was good carry for the bowlers, who also got movement off the seam. The match was won in the final session of play, which always seems the perfect outcome (admittedly with the equivalent of just over a session lost to weather in this case). The win leaves Middlesex nine points clear at the top of Division 2 of the County Championship.