“It is criminal. It is a criminal act against football fans in this country," he said. 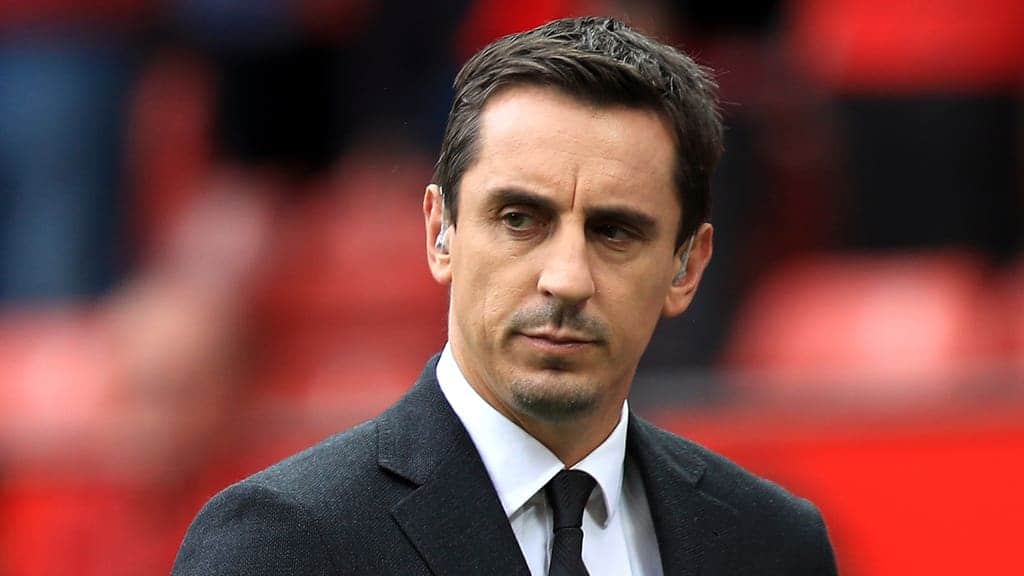 Gary Neville claims Manchester United, Liverpool and Arsenal should be relegated if they sign up to a breakaway European Super League.

The three clubs, along with the other members of the Premier League’s so-called ‘big six’ in Chelsea, Tottenham and Manchester City, have reportedly joined plans for a rebel competition.

There have been claims 12 of Europe’s biggest clubs are plotting to create their own 20-team rival to the Champions League in which they would be guaranteed annual entry.

“It is an absolute disgrace”

The reports have met with widespread condemnation from within the game and Neville says he is appalled by the developments, which he feels are motivated by greed.

The former United and England defender told Sky Sports: “I am a Manchester United fan and have been for 40 years but I am disgusted, absolutely disgusted.

“It is an absolute disgrace. Honestly, we have to wrestle back power in this country from the clubs at the top of this league, and that includes my club.

“The motivation is greed. Deduct them all points tomorrow, put them at the bottom of the league and take the money off them. Seriously, you have got to stamp on this.

“It is criminal. It is a criminal act against football fans in this country. Deduct points, deduct money and punish them.

“Enough is enough. There isn’t a football fan in this country that won’t be seething listening to this conversation and these announcements. This is disowning-your-own-club stuff, this.

“Let them break away but punish them straight away. If they announce a letter of intent has been signed, those six clubs, they should be punished heavily. Massive fines, points deductions, take the titles off them.

“Give the title to Burnley, let Fulham stay up. Relegate Man Utd, Liverpool and Arsenal. Those three clubs, with their history in this country, are the ones that should suffer the most.

“The history and traditions that run through those three clubs is absolutely enormous and I value it, but they leave a lot to be desired at this moment in time.”

“The timing is hideous”

Neville also feels the timing is crass, coming amid a pandemic and just ahead of an anticipated announcement from European governing body UEFA on Monday detailing changes to the format of the Champions League.

Neville said: “Seriously, in the midst of a pandemic, an economic crisis, football clubs at National League level going bust, furloughing players, clubs on the edge in League One and Two, and this lot are having Zoom calls about breaking away and basically creating more greed? Joke.

“I’d like to think Manchester United and Liverpool would stand there in the face of this and say something is not right here.

“Let’s collaborate with the game to try to get a better competition, a better Champions League. I’m not against the modernisation of competitions but this is a grab.

“The timing is hideous. What world are these people living in to think they can bring this forward at this moment in time?”

Former United captain Roy Keane, also working as a pundit on Sky Sports, was forthright in his opinion.

Keane said: “I think it comes down to money, greed.

“Obviously we’ve heard nothing from FIFA yet but it doesn’t sound good. Let’s hope it’s stopped in its tracks.

“We talk about the big clubs. Bayern Munich are one of the biggest clubs in the world – at least they’ve made a stand, which is a good start.

Damian Collins, the MP for Folkestone & Hythe, also sent out a statement calling for urgent reform of the governance of football to stop it becoming the “play thing of a few wealthy owners”.

There's nothing super about the proposed new closed franchise league of elite clubs. We need reform of the governance of football to stop it becoming the play thing of a few wealthy club owners. Here are my thoughts on this issue. pic.twitter.com/KxYyC5EKrW

Meanwhile the FSA said it is “totally opposed to the proposals”.

“The motivation behind this so-called superleague is not furthering sporting merit or nurturing the world’s game – it is motivated by nothing but cynical greed.

“This competition is being created behind our backs by billionaire club owners who have zero regard for the game’s traditions and continue to treat football as their personal fiefdom.

“The FSA, and no doubt supporters across the continent, will continue to fight against its creation.”