by Nathan Pynn
in Must Reads, Property 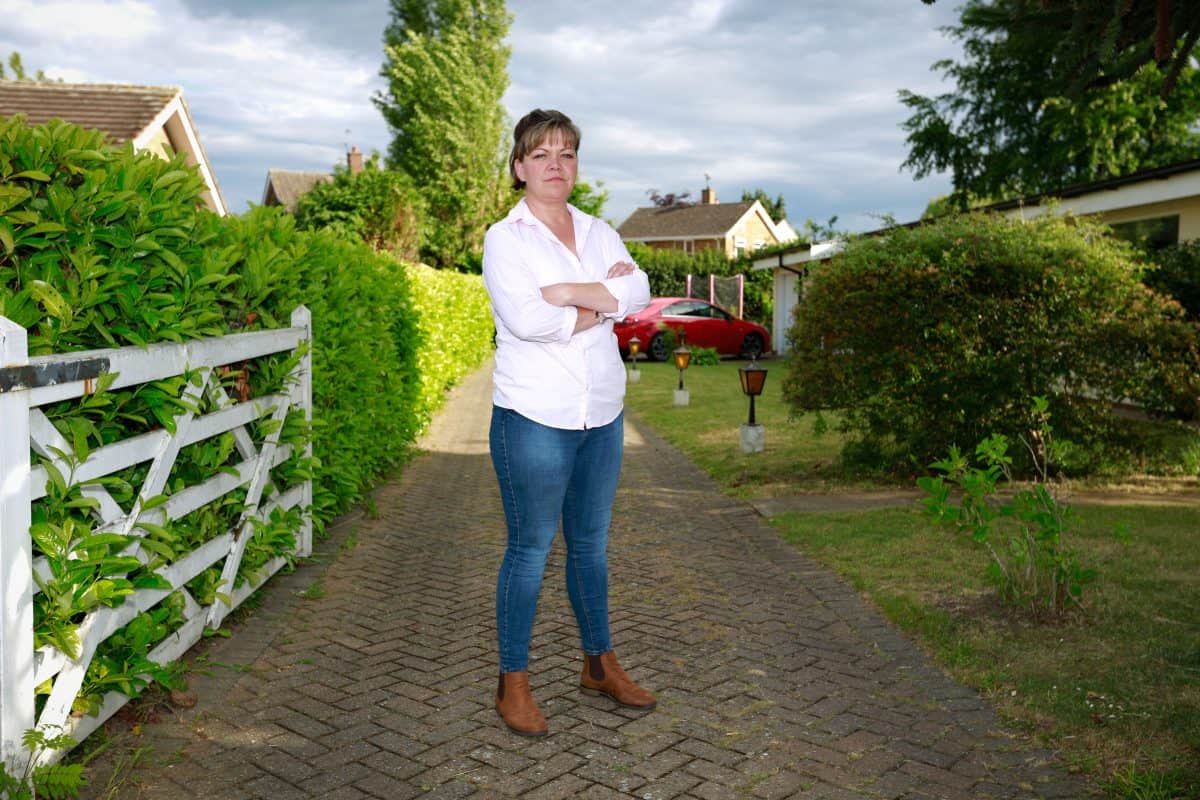 Lara Acutt, 37, has been locked in a four year dispute with her neighbour (Picture: SWNS)Read more: https://metro.co.uk/2019/05/29/neighbour-filmed-dumping-massive-pile-clippings-driveway-four-year-feud-9728103/?ito=cbshareTwitter: https://twitter.com/MetroUK | Facebook: https://www.facebook.com/MetroUK/

Two warring neighbours in a quiet suburban street have called in police and installed CCTV cameras in a bitter four-year row – over a laurel HEDGE.

The dispute reached boiling point when Julie Wayte, 61, was filmed emptying a full bag of garden waste on the driveway of next door neighbour Lara Acutt.

Mrs Wayte claims she is forced to cut a 5ft-tall hedge which belongs to Ms Acutt and overhangs her front garden.

But Ms Acutt, 37, insists she is prepared to trim the boundary hedge on Mrs Wayte’s side but is forbidden from going onto her property.

Police were called on May 13 after Ms Acutt’s security camera’s caught Mrs Wayte blocking her driveway with a 4ft-high mound of hedge clippings.

Ms Acutt, a single mum and district nurse who lives on Valley Prospect, Newarks, Notts., with her seven-year-old daughter, said: “The situation has got beyond ridiculous.

“This is quite simply harassment.

“The hedge is on my side and I have offered to cut it on Mrs Wayte’s side but she doesn’t let me go onto her property. What on earth can I do?”

The couple have been at loggerheads since Mrs Wayte and her husband Charlie moved next door in November 2014.

They have been to mediation over the dispute but to no avail and Ms Acutt has even called the police who say they are powerless to intervene.

In desperation, Ms Acutt posted the video of her neighbour dumping the garden waste on Facebook and the clip has since gone viral with more than 10,000 views and shares.

She said: “It’s un-neighbourly and disrespectful. Particularly when I have been so fair.

“It started when I was about to do my annual hedge trim in January 2015.

“I knocked on Julie’s door and said ‘do you mind if I do the hedge?’

“She refused to let me come onto her drive to tidy up the hedge and said she would do it herself which was fine by me.

“Over a few days, I ended up with glass jars dumped on my driveway and then large bags of hedge clippings would appear at the end of my drive.

“I asked her about it but she became quite rude.

“It was a hostile atmosphere and I strange things started happening.

“She has a security camera on her back wall which I feel is aimed into my garden which makes me feel quite uncomfortable because I often have my daughter’s friends round to play.

“In the end we both agreed to do mediation because the hedge dispute was getting out of control.

“I said during mediation, ‘if you want me to do the hedge, I will quite happily do it’.

“I said ‘OK, if you want to do your side, leave it in a bag on my driveway and I will take it away’.

“Her and her husband did part of the hedge eight weeks ago and it was fine.

“Then on May 13, there was this tonne of hedge clippings left on my driveway.

“I was quite shocked when I watched the CCTV and caught Julie in the act. It was a deliberate act of provocation and quite unnecessary.

“I don’t have any personal malice against this woman.

“She doesn’t want me to cut it, but she will cut bits off her side and throw it on mine.

“When I offer to trim her side she says ‘no you’re not coming onto my property’.

“That was not what was agreed with the police in mediation in February this year.”

As well as the hedge row, Ms Acutt claims the police quizzed her at Christmas over allegations her daughter had climbed down Mrs Wayte’s chimney.

She added: “If it wasn’t so upsetting I’d probably laugh. It’s one thing to have a go about the hedge but then my daughter is accused of being some kind of bad Santa Claus.

“The police said Julie reported that my daughter had climbed the hedge, and got on the roof, and climbed onto the chimney as if she was going to come down the chimney.

“That’s not true, and a bizarre statement. I want to get along with Julie but I just don’t know what more I can do.”

Mrs Wayte, a hairdresser, admits dumping the clippings on the driveway but denies doing being abusive.

Mrs Wayte said: “I would like her to cut our side of the hedge. She has never asked if she can come over and cut it.

“We keep ourselves to ourselves. We just want to be left alone.

“The police did not tell us they were going to cut it 5ft high.

“There was nowhere else to put the branches. I needed the bag to fill it up again.

“I did not mean for it to be disrespectful. If I wanted to be malicious, I could have thrown the whole thing over.

“She has never come here to ask to cut the laurel.

“I have never been abusive to her.

“It’s been hell on earth trying to live here.

“I couldn’t believe it when she put [the CCTV footage] of me on Facebook.

“That laurel has never been cut for five years.

“When we moved in I said, ‘that is her boundary, that’s going to be trouble.’

“The throwing of the branches back over the fence was agreed. It was all stuff that came over when he originally cut it 5ft high.”

A Nottinghamshire Police spokesperson said: “We have spoken to both parties regarding the incident and are continuing to liaise with them to resolve any issues.”