A millionaire has been ordered to remove his expensive man cave in weeks because of land boundary disputes. Graham Wildin, 62, was filmed by a woman who lives next door pulling down a fence that seperates the properties and throwing a flower tub at her in an ongoing row with neighbours. Wildin caused outrage when he […] 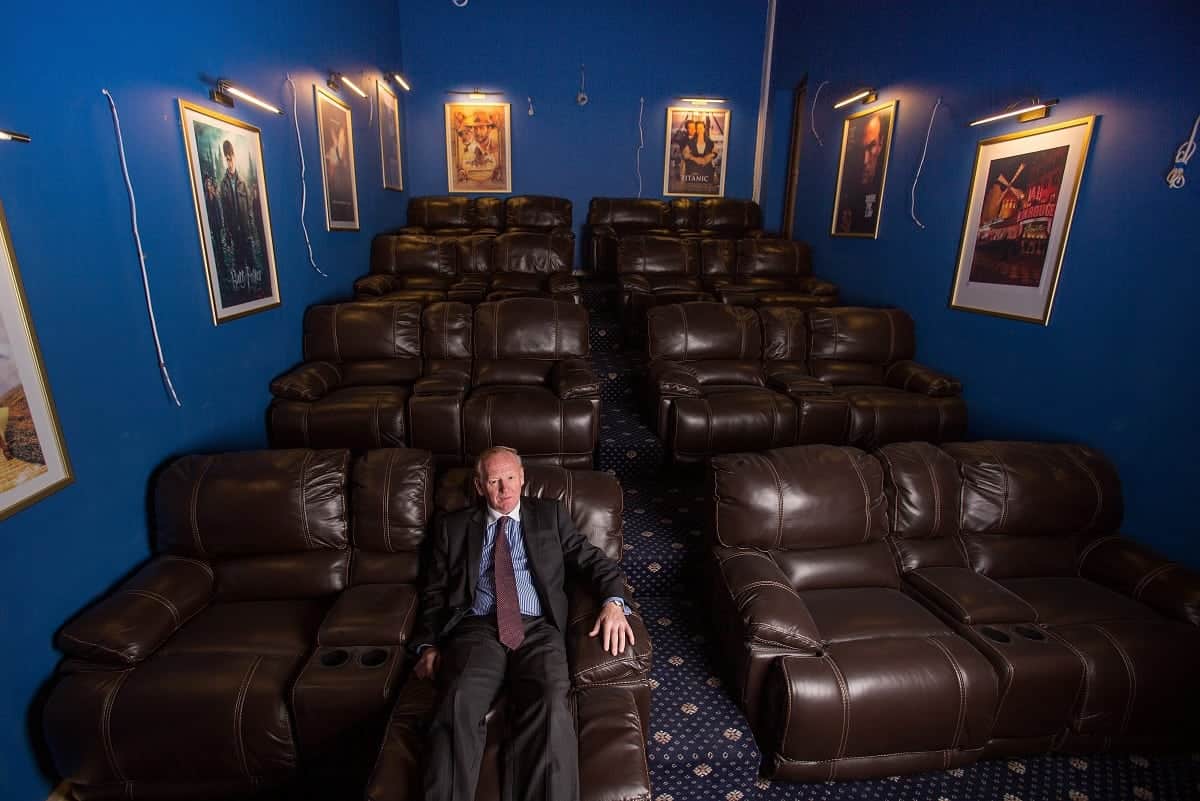 Please note sent under embargo no online use before 15.00BST May 7 2017. Graham Wildin inside the leisure centre he has built for himself and his family in the back garden of a recently purchased property. See SWNS story SWFENCE; This is the moment a millionaire who built a controversial 'man cave' in his garden was caught on camera tearing down a fence in an ongoing row with neighbours. Graham Wildin, 62, was filmed by a woman who lives next door pulling the fence - and throwing a flower TUB at her. Wildin caused outrage when he built a massive extension without planning permission and has been given until July to tear it down. The 10,000sq/ft leisure centre, including a two-lane bowling alley, a 16 seat cinema, squash courts, private casino and bar, defied planning rules.

A millionaire has been ordered to remove his expensive man cave in weeks because of land boundary disputes.

Graham Wildin, 62, was filmed by a woman who lives next door pulling down a fence that seperates the properties and throwing a flower tub at her in an ongoing row with neighbours.

Wildin caused outrage when he built a massive extension without planning permission and has been given until July to tear it down.

The local council warn that the vastly expensive project must be removed in a matter of weeks. But Mr Wildin has faced further rows with his neighbours over land boundary disputes and a fence between the property.

Neighbour Garry Thomas, 36, constructed a 12ft-wide wooden fence last summer so he didn’t have to look at the extension.

Mr Wildin claimed the £300 fence encroached onto his property, but Mr Thomas said his deeds showed the fence was within his own boundary.

The situation escalated when Mr Wildin tore down the wooden fence, captured on film by Mr Thomas’ partner on April 26.

Millionaire Mr Wildin can be seen rocking the fence backwards and forwards.

He then climbed up on to a ledge and threw a black plastic bin at Mr Thomas’ stunned partner.

The film shows him aggressively kicking the wooden fence after “trespassing” on the property, in Cinderford, Glos. Dad-of-three Mr Thomas, who works as an electrician, said: “I’m struggling to come to terms with it all.

”He is just picking on me and being a bully in a way because he has money.

“The fence has been up since last June. It’s now not salvageable, the main supporters are destroyed and the gravel boards have been split.”

He bought the house five years ago but is contemplating selling up because of the hostilities, including the aggression shown to his other half.

Mr Thomas said: “I was enraged when I found out. I’m not the sort of person who will flip out but I just cannot believe someone could do that, he belittles everyone.” He claims he put up mesh fencing following the incident, which Mr Wildin has allegedly cut in two.

Relations became strained between the neighbours when Mr Wildin built his a spectacular playhouse for his grandchildren five years ago.

Mr Thomas refused to sign a petition backing the plans, which he now believes caused the accountant to take offence, and said: “It’s always his way or the highway.

“He asked me to move my fence 300mm back onto my land but I don’t agree with him because I haven’t gone on to his land at all.

“He’s saying I’ve encroached on his land but there’s metal fencing that’s always been there since the property was built, that’s proven and witnessed by my next door neighbour.”

Mr Wildin began building the luxury complex in the back garden of his six-bedroomed mansion in 2013, and finished the following year.

The grandfather-of-five claims he took careful notice of planning laws and was taking advantage of a loophole which allows him to construct the building.

He claimed he thought he did not need permission when he started construction, but council officials said the building breached planning laws and issued an enforcement notice for it to be removed in February, later extended until July.

Next-door-neighbour Francis Witts compared the attitude to that of another controversial businessman, locked in a planning dispute with a Scottish farmer.

Mr Witts said: “He is an an obnoxious man and everyone refers to him as Donald Trump.

“He has his own set of laws and said to us ‘you’ve not got the money to take me on because I’m a millionaire’.

“All he has said to us about the leisure centre is that it’s not coming down.” Forest of Dean District Council planners have said the ‘bulky structure’ is ‘totally out of scale and proportion with the surrounding development’.

With weeks to go until the land must be returned to its original state by July 7, Mr Wildin has showed little signs of complying with the order.

He told a local newspaper: “It’s not coming down. That is definite.

“The council have given notice at the end of which they will have to decide whether they are going to do anything or not. But there are a lot of legal issues involved.”

Mr Wildin had always maintained he did not need planning permission and it was semi-submerged 18 foot into the ground, saving neighbours’ views.

A spokesperson for the Forest of Dean District Council said: “There is an enforcement notice requiring the removal of unauthorised development at 24 Meendhurst Road, Cinderford.

“Mr Wildin has until the 7 July 2017 to comply with the notice which has been endorsed by a planning inspector.

“Once the period for compliance with the notice has expired, Mr Wildin will be liable to further action, including prosecution in the courts for a breach of the notice.

“Due to the possibility of legal action it would be inappropriate for us to comment further at this time.”