“Too many service families are forced to tolerate sub-standard living conditions after failings by the DIO to maintain their homes." 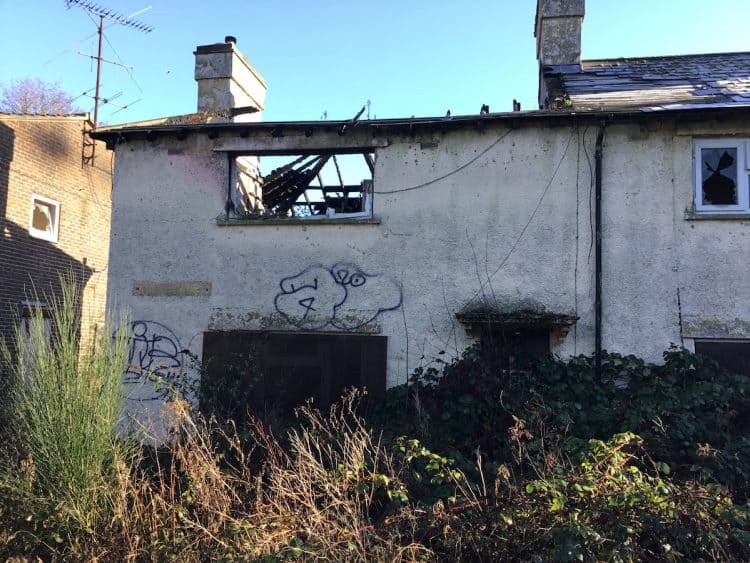 Homes in Uxbridge, leased back to Annington Homes by the MoD, Credit;SWNS

This is the shocking state of some of the homes reserved for our armed forces that the government has been paying more than £36 million a year of taxpayers’ money to rent.

The company that owns them has now offered to stump up £105 million to upgrade thousands of forces homes after they claim government contractors failed to maintain them.

Some of the properties are so badly looked after that they are uninhabitable, with one site of 85 homes in Prime Minister Boris Johnson’s constituency of Uxbridge not lived in since 1996 despite rent still being paid up to last year.

Another block of 87 flats at Brize Norton had to be knocked down but the government has still stumped up £5.5 million of taxpayers cash in rent for the space left.

The MoD sold off its housing stock for their personnel of around 55,000 properties in 1996 for £1.7 billion to Annington Homes.

The houses were then leased back to the Government at half the commercial rent and the maintenance of the properties went to the Defence Infrastructure Organisation (DIO), which is part of the ministry.

But since the sale, the portfolio has massively increased in value to nearly £8 billion and the Government wants to buy it back.

Annington Homes say that the DIO has done an appalling job of maintaining the properties.

They have now offered the cash to modernise the remaining stock of more than 30,000 homes on condition the Government drops its bid to buy back the portfolio which it claims will take years and be hugely expensive as each house will have to be valued separately.

Last December the company agreed to take back 172 of the worst properties and waived the clause that they be renovated to a good standard, saving the government tens of millions.

Many of the properties are covered in mould and damp and some are falling apart entirely – with collapsed roofs, ceilings and floorboards, while rooms stand empty and unfurnished.

But on 16 December 2021 and 28 January 2022, the government said it wanted to buy back two houses in Cranwell, Lincolnshire in what is seen as a test case.

It wants to use enfranchisement legislation designed for homeowners to buy back the freehold of their properties to force the sale.

But Annington Homes say they are prepared to fight any attempt to buy back the homes in the courts.

In a statement to MPs on 27 January this year, Minister for Defence Procurement Jeremy Quin MP said the ministry was looking into buying back all the houses leased to the MoD by Annington.

Around 20 per cent of the properties- 7,230- are currently standing empty.

At one site in Uxbridge returned to Annington last December almost £10 million of taxpayers money has been forked out in rent despite the fact no one has lived there since 1996.

And at another site at Brize Norton,also handed back under the December deal, the DIO knocked down 87 flats whilst continuing to pay £5.5 million in rent for the empty site.

Annington’s chair Baroness Helen Liddell said: “Too many service families are forced to tolerate sub-standard living conditions after failings by the DIO to maintain their homes.

“We believe this significant pot of money would go a long way towards bringing Service Family Accommodation into the 21st century.

“The money the government intends to spend on misguided attempts to enfranchise Annington properties is far better spent on desperately needed improvements to these service homes.

“We are generously offering to put this right as we firmly believe that our service personnel and their families deserve better.”

Annington Homes said in an open letter to Defence Secretary Ben Wallace: “It is a matter of profound regret that the DIO does not take its obligation to ensure good upkeep seriously; the state of the properties in which our Service personnel are expected to live, is often unacceptable, and the approach that DIO has taken towards those houses is often perverse.

“The absurdity of the DIO’s approach to the houses is shown at sites such as RAF Uxbridge where rent to the value of £9.8 million has been paid on 85 houses since 1996, despite those houses remaining unoccupied for the entirety of that period and becoming entirely derelict.

“The MoD pays approximately £36.6 million per year of taxpayers’ money in rent on these empty houses and flats, at a time when demand for homes is at an all-time high.

“It makes no sense at all for the MoD either to spend these vast sums renting homes with no occupants, or to deprive would-be homeowners or buyers of a proper home of their own.

“It also makes no sense that DIO is now taking steps to use enfranchisement legislation to buy these houses back at considerable public expense, when it has no need for them

“These are not the actions of a Government committed to the rule of law.

“We expect to commence proceedings within weeks, and the litigation that follows will cost Annington and the MoD huge sums in legal fees and take many years.

“While the impact of the attempt to enact the scheme should have come as no surprise, its consequences should by now be abundantly clear.

“More alarming still is that by making the attempt, the MoD is now exposed to a claim which may run into the billions of pounds and which would result in either the reallocation of much-needed MoD funding from elsewhere within an already strained budget or yet a further burden upon the Treasury.

“Such a claim is surely a distraction from the true purpose of the Ministry of Defence.

“We are still committed to working to improve the condition of the estate and want to restore our relations.

“To that end, we are proposing that Annington creates a substantial fund, the Annington Housing Modernisation Fund (AHMF) to be spent on the houses most in need of improvement and modernisation – as well as being spent upon improvements and energy efficiency measures.”

A Ministry of Defence spokesperson said: “We believe our approach offers a significant opportunity to deliver value for money for the taxpayer and increase our flexibility in meeting the needs of service families and wider government objectives.

“We will of course study whatever Annington puts to us.”