Joe Tompkinson, 33, and wife Claire, 43, were excited about the prospect of a “fresh start” when they moved into their Linden Homes property in December 2017 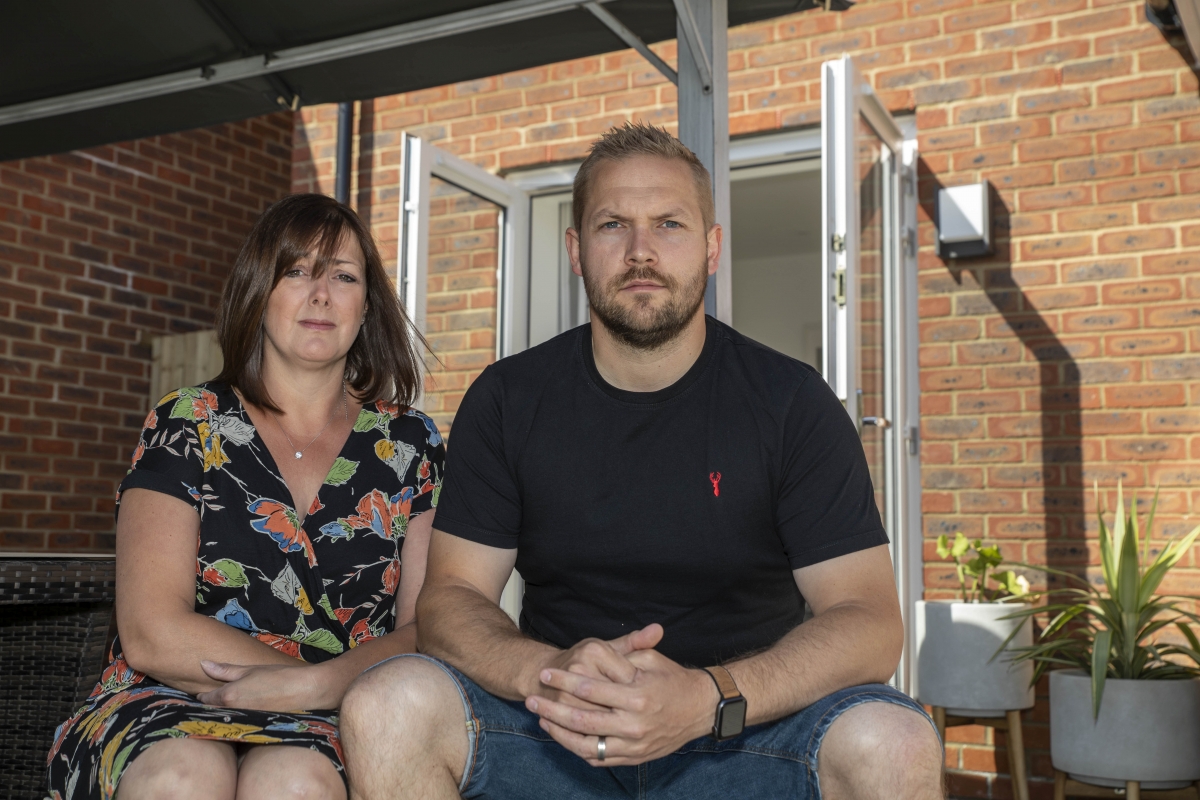 A homeowner says he has over 400 FAULTS on his new build home – including roof tiles kept on with DUCT tape.

Fuming Joe Tompkinson, 33, and wife Claire, 43, were excited about the prospect of a “fresh start” when they moved into their Linden Homes property in December 2017.

But they started noticing problems after three weeks when a tile fell off the roof and caused £3,000 of damage to their car, which was parked on the driveway.

Joe says at one point there were more than 400 faults – a variety of issues from paint defects to tiles not being fitted properly.

He says some have been repaired but there are still more than 100.

Joe, a policeman of 12 years, has heard tiles, some of which are secured with adhesive tape, falling from the roof as he lays in bed at night.

The couple share the property with their three children, aged eight, five, and three – who they say are at risk of being hit with falling tiles.

Joe says an independent survey condemned the roof because the majority of tiles were incorrectly secured and soffits built too low.

He says he discovered this information through a subject access request under the Data Protection Act.

He claims the firm would not release the report or provide a copy to the National House Building Council (NHBC).

Joe said: “Linden Homes have allowed my family to live under this roof now for 18 months but for six months have known what is wrong with it.

“I repeatedly asked for this report, at times sending several emails a week

“They withheld it until I put in a subject access request under the Data Protection Act.”

Joe claims Linden promised £7,350 to cover expenses while the family vacated the house for “a few weeks in the summer” to allow repair work to be undertaken.

He booked a three-week holiday to Florida but claims Linden have since withdrawn the offer.

Joe said: “We had been in the new home for a couple of weeks when Claire found a smashed tile on the driveway which had come off the roof.

“A tile caused £3,000 worth of damage to our car which was parked outside. This was reimbursed but initially Linden said it was an act of god caused by wind.

“We’ve heard tiles falling from the roof when we’ve been in bed.

“We are worried a tile could come off and hit us or the children. It’s not safe.”

Joe says he wants the Government to “step in” and review future developments by Linden Homes given the problems he has faced.

He added: “It’s alarming that they are insisting on building more houses all the time – I want the government or the local authority to step in and assess whether this is safe.

“We would like to stay in the property because we like the area – we get on well with the neighbours and the children go to school five minutes up the road.

“We moved here from a similar property because we fancied a fresh start.

“Our old house was 20 years old and we needed things like a new kitchen and a new bathroom.

“We were also looking at building a conservatory so instead thought the best option would be moving into a new build.”

Linden said in a statement: “We have confirmed to Mr Tompkinson, on a number of occasions in writing, that we will attend to any issues with his home which do not comply with NHBC standards.

“We warrant to finish our homes to these standards and the customer has agreed that the NHBC are best placed to determine which issues require attention.”