Brian Fisher, 85, put items out in front of his home for 'free' but expected a charitable donation 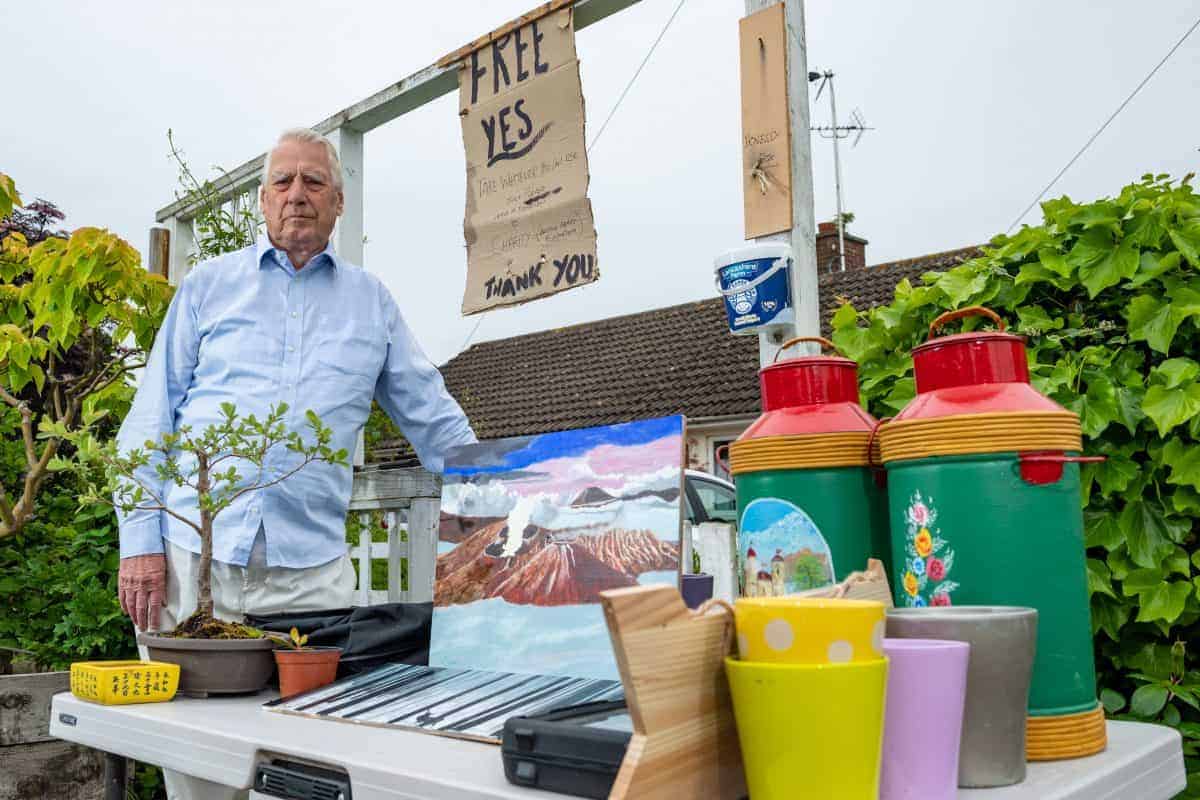 AN OAP has branded southerners ‘stingy’ after giving away more than £500 worth of unwanted items in exchange for a donation to charity – and only getting £15.

Lancashire-born Brian Fisher, 85, put up a sign outside his Essex home offering a range of items for free in return for a ‘sensible’ donation.

The items included a Bonsai tree worth £50, a brand new set of car mats, a four-slice-toaster, box of spanners and an assortment of household goods.

But Mr Fisher, from Maldon, Essex, says he was ‘sickened’ to find that his neighbours had only donated £15.01 for goods he said were worth around £540.

He put the goods out on a table outside his home with cardboard sign saying; “Free. Take whatever you can use but please leave a donation to charity.”

Brian blamed the north south divide and a generation change for the lack of charity and wonders: “what is today’s society coming to, I spent most of my life in the north and we did it differently there.”

He said he offered the items up outside his home as a “psychological experiment to understand today’s society”.

He said: “In the sign it clearly says to leave a sensible donation to the British Heart Foundation.

“When any item was taken, I would replace it and make sure it was fully loaded for two weeks.

“I thought to just give it a go and see.”

Brian, a former marketing director for an international chemical company, valued his stock being worth £540.

He was shocked to find that if anyone put money into the charity tin, it would only be pennies.

He said: “The most valuable item was a set of brand new car matts, which were probably retailed at £70.

“I checked once the people left with them, they only left 50p.

“I go to the supermarkets once a week and see people’s shopping carts loaded right to the top with food, so there’s no shortage of money in Essex.

“People didn’t have cars, you’d be lucky if they even had a bicycle, I would never ever do that.”

Brian thinks that even though the sign clearly said ‘free’, he would expect people to donate.

He said: “I’m the opposite of pleased, If I went past a garage sale I’m always looking for some kind of price.

“I’m not sure if it was a bad public opinion of charities, because of Oxfam, I just don’t know.

“I was brought up to trust one another 100%, that’s part of my character.

“The world is upside down, whether that is because the British public are fed up with how it is or it is just a new mentality.”

Brian even said that some Essex locals took more than £180 of kit, including toasters and sports equipment and paid only 10p.

“I had a bet with myself that it would end like this, but still it makes me so frustrated,”