Ben Baker, 33, and his wife Victoria, 31, had asked grandad Paul, to build their two children Lily, 3, and Elsie, 9, a tree house in his garden. 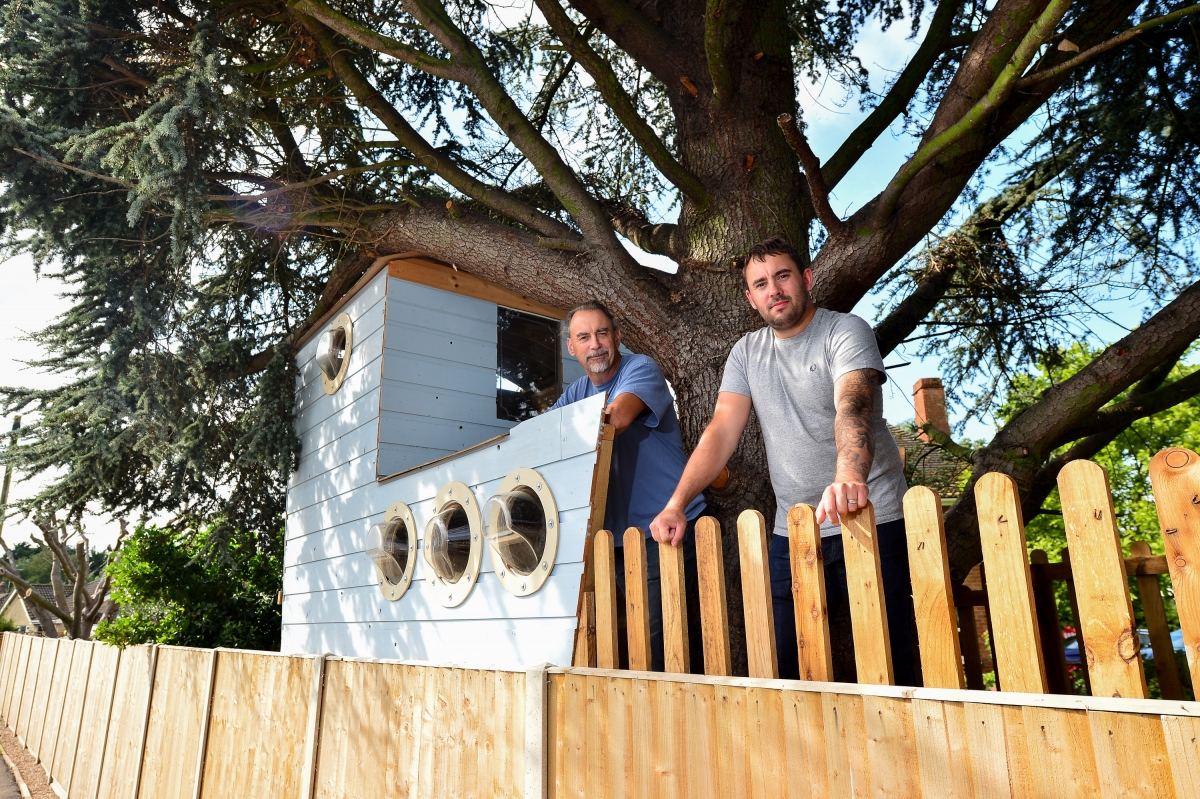 A dumbfounded family who spent six weeks building a two-storey treehouse have been told they might have to rip it down – because they don’t have planning permission.

Ben Baker, 33, and his wife Victoria, 31, had asked granddad Paul, to build their two children Lily, 3, and Elsie, 9, a tree house in their garden.

And after six weeks, the amazing boat-themed playhouse was finished complete with wooden decking, a fence and windows.

But Lily and Elsie barely had time to play in it before the family received a knock at the door from a council officer.

To Ben’s surprise, he was told “concerns had been raised” and that he needed planning permission for the tree house.

Salesman Ben from Donington, Licolnshire, said: “It is frustrating.

”We had just finished the roof and then the next day we got a knock on the door to say someone had raised concerns about the tree house.

“They said we needed planning permission for it but I never even thought about it.”

The blue tree house has two storey’s and is five metres in length and two and a half metres in depth.

It is built around a tree in the family’s garden and only has one screw in it.

Ben’s dad Paul had built it over a six week period and spent hundreds of pounds on the structure.

He continued: “I asked my dad if he could make my children a tree house and he built it in his spare time over six weeks. It’s boat themed- which was completely his idea.

“He sort of just got on with it and we chose the colour scheme.

“He wouldn’t tell me exactly how much it cost but for all the metal and screws I think it would have cost quite a bit- at the least a few hundred. I don’t think he wanted my step mum to know!”

The couple have since paid £225 to submit a retrospective planning application but are worried that they will need building regulations consent too.

He said: “If we need that then I think we’ll have to take it down but I’m hoping it won’t come to that.”

Since the council visit, they have changed the colour scheme and have said it shouldn’t bother the neighbours because the children can’t see into other gardens from it.

Ben added: “The neighbours seem to like it, some even donated the windows! It’s just something different that stops people in their tracks.”

If they get consent from the council, the family hope to deck out the playhouse with furniture.

Ben added: “We are going to decorate it. We want to put carpet in and chairs for the girls to sit on.

“My dad wanted to build another storey but luckily he didn’t! He also wants to put a slide in but we’ll have to wait for the decision.

“My kids absolutely love it. Every time they go in the garden they’re in the tree house.

A South Holland District Council spokesperson said: “The planning application has been submitted and will be considered once all consultation responses have been received.”

By Ben Gelblum and Sophie Finnegan