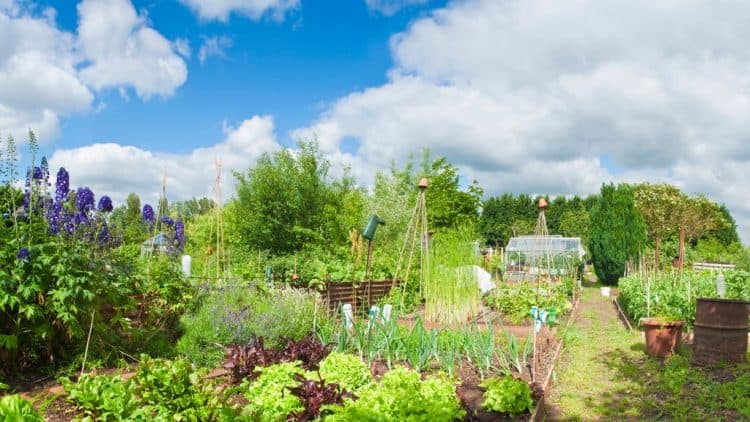 An estate agent comparison site has called for allotments to be turfed up in order to make way for more than 600,000 new homes.

According to GetAgent research, there are around 4,554 allotments across the nation containing roughly 177,606 plots, each at an average size of 250 square metres.

But the call to rid the country of crop-growing land is likely to provoke outrage among green-fingered Brits, with demand for allotment space at an all-time high.

According to the latest figures from the National Allotment Society (NAS), some 40 per cent of English councils have reported a “significant uplift” in applications to join waiting lists, with a 300 per cent increase in one case – Hyndburn in Lancashire.

The NAS also reported a 45 per cent increase in the number of requests for information through its own website.

According to Phil Gomersall, the president of National Allotment Society, there’s a good reason why.

Speaking to the Yorkshire Post, he said: “They offer a green lung, especially in urban areas, taking carbon out of the air. There’s also soil improvement, with allotments’ far superior to that of agriculture. It’s more intensively looked after on an allotment – less chemicals, more good stuff like homemade compost.

“It’s doing your bit for the climate – by growing your own you’re minimising transport miles for food, there’s no plastic packaging. It all helps.”

Today’s system of allotments has its roots in the 19th century, when land was given over to the labouring poor to grow food – a much needed measure at a time of rapid industrialisation and no welfare state.

The number of allotments surged to 1.5 million during the First World War and again during the Second World War when the government created half a million plots as the famous phrase ‘Dig for Victory’ was coined.

Decline followed in the 1950s and 1960s as the era of cheap and easily available mass-produced food began and many allotments were sold off for development.

Interest began to return in the 1970s, and according to Mr Gomersall, has really beginning to rise 20 years ago, with some of the recent increase potentially down to the pandemic and employment insecurity.

Colby Short, founder and CEO of GetAgent, said: “Allotments can play a very important role within the community, particularly in our major cities, providing the outdoor space that many look to in order to relax, unwind and socialise. So in this respect, they are probably more valuable than any bricks and mortar market value.

“However, we desperately need more homes, an issue that the government has been woefully poor at addressing. While we don’t suggest that allotments are the answer, we wanted to draw attention to the fact that more must be done.

“Rather than sacrifice the nation’s allotments, there is a great deal of brownfield and wrongly classified green belt land that could go some way in helping deliver more homes. But until the government decides to pull its finger out, it will continue to sit unused and of no use to anybody.”