‘We couldn’t pay for this’: Reaction as winner of Tory leadership debate judged to be… Labour!

One Labour source said their jaw was "on the table at how damaging this is for the Tories" following the debate, with others describing it as a "generous gift" for Sir Keir Starmer. 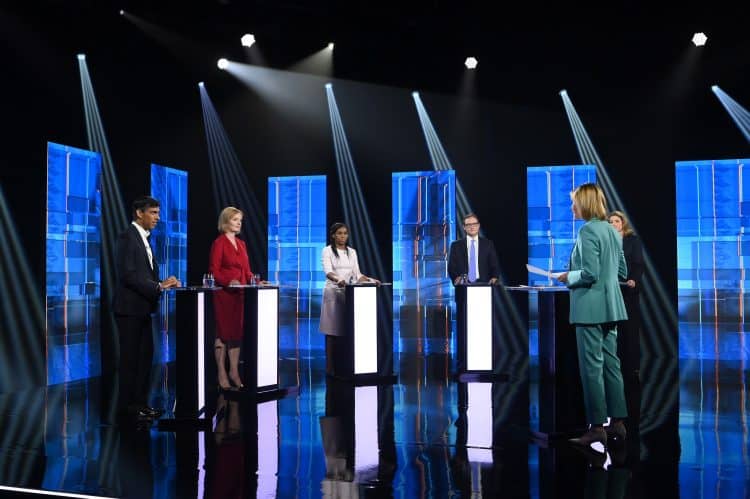 The former chancellor accused Ms Truss of peddling “something-for-nothing” economics after she said he was choking off growth by raising taxes to their highest level in 70 years.

And after Ms Mordaunt said she would not keep to his rule of only borrowing to invest, he said even former Labour leader Jeremy Corbyn did not advocate such a fiscal loosening.

After she was criticised for a poor performance in the first debate, Ms Truss immediately went on the offensive in the second encounter, staged by ITV, by attacking Mr Sunak’s record in the Treasury.

“Rishi, you have raised taxes to the highest level in 70 years. That is not going to drive economic growth,” she said.

“You raised national insurance, even though people like me opposed it in Cabinet at the time because we could have afforded to fund the NHS through general taxation.

“The fact is that raising taxes at this moment will choke off economic growth; it will prevent us getting the revenue we need to pay off the debt.”

Mr Sunak said the pandemic damaged the economy and public finances had to be rebuilt.

“There’s a cost to these things and the cost of higher inflation, higher mortgage rates, eroded savings. And you know what? This something-for-nothing economics isn’t Conservative. It’s socialism.”

Ms Mordaunt said the limited tax cuts she advocated were not inflationary and people need help now with the cost of living.

Mr Sunak said: “It is one thing to borrow for long-term investment. It is a whole other thing to put the day-to-day bills on the country’s credit card. It is not just wrong, it is dangerous.

Mr Sunak added: “If we are not for sound money, what is the point of the Conservative Party?”

There were further bad tempered exchanges between Ms Mordaunt and Kemi Badenoch – who had accused Ms Mordaunt in the first debate of having pushed a policy of gender self-identification for people who wanted to legally change their gender when she had government responsibility for the issue.

Following further reports in the press casting doubts on her denials, Ms Mordaunt said: “I know why this is being done but I would say all attempts to paint me as an out of touch individual will fail.”

“I am telling the truth”

Ms Truss also denied that she was running a negative campaign following attacks on Mr Sunak by some of her supporters accusing him of bringing down Boris Johnson.

The debate took place ahead of the third round of voting by MPs on Monday, with one more candidate due to to be eliminated, leaving just four.

Reaction was quick to pour in on social media, with a lot of people pointing to the one true winner on the night.

And unfortunately for the Tory candidates, it wasn’t any of them!

Related: Liz Truss moving towards No.10? Tory leader polls ‘swing in her favour’