The plans would hand ministers powers to unilaterally "switch off" parts of the Northern Ireland Protocol. 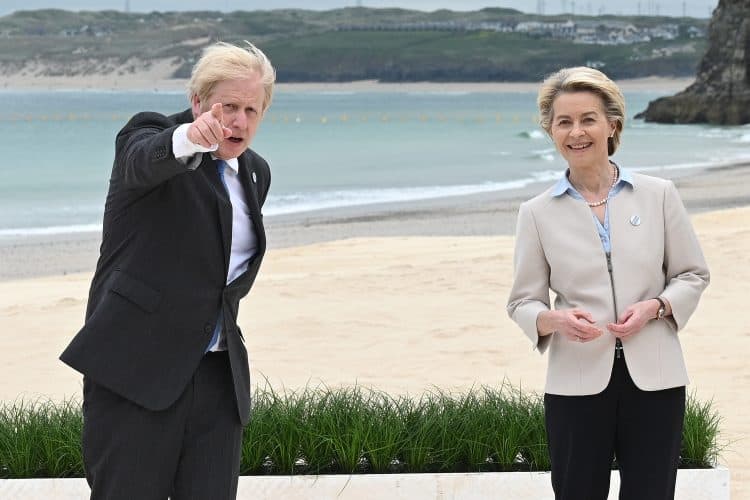 The UK is preparing legislation that will hand ministers sweeping powers to tear up the post-Brexit deal dictating trade in Northern Ireland, reports suggest.

According to the Financial Times, Boris Johnson and foreign secretary Liz Truss have signed off on plans to put forward a Northern Ireland bill early in the next parliamentary session.

The government is reportedly developing the plans in anticipation of a constitutional crisis if the mainly protestant Unionist parties – which rejected the Northern Ireland Protocol – refuse to enter the power-sharing executive after May’s Northern Ireland Assembly elections.

Under the plans, ministers would have unilateral powers to switch off key parts of the Protocol in UK law – including border checks on goods travelling to the region from Northern Ireland.

The move will spark fury in Brussels. The EU signalled last year that it could suspend its post-Brexit trad deal with the UK if London reneges on the deal it signed up to.

One EU diplomat warned that it would be “utterly irresponsible” if the UK broke international law at a time when the west is seeking to present a united front against Russia’s invasion of Ukraine.

Vladimir Putin would be delighted by the development, the diplomat told the FT. “Given what is at stake in Ukraine and for the west as a whole, this definitely is not the time for gambling away Britain’s reputation as a stalwart of the rules-based international order,” they said.

A UK government spokesperson said: “No decisions have yet been taken and our overriding priority continues to be the protection of peace and stability in Northern Ireland.”

Responding to the story on Friday morning, Northern Ireland minister Conor Burns said it is clear the arrangements are not working in the way that was intended and the Government already has powers under Article 16 of the protocol allowing it to suspend elements of it.

He told LBC radio: “As far back as last July the prime minister said that we believed that the threshold for triggering Article 16 of the Northern Ireland Protocol had been reached.

“There is significant societal disruption in Northern Ireland due to the way that the protocol is being implemented.

“I hope Brussels are listening to this conversation and other conversations. I hope they will come back to the table constructively to allow us to change the protocol to make it work in the way it was intended.

“If they don’t hear that, then the government reserves the right, as we have always said, as laid down in the protocol, to take remedial action.”

“Boris Johnson negotiated, his team drafted the Northern Ireland Protocol; they presented it to the EU, they negotiated it into the deal.

“It doesn’t work as well as it can do, that’s why the Labour policy is, you build on it – we can improve the protocol, we can smooth it, and we can do so without breaking the law and breaking our international treaty we signed with the EU.

“If we just recklessly pull out of it unilaterally, how will any other country in the world sign a deal with us and think that we will honour it?

“How will Prime Minister Modi react today when Boris Johnson asks for a trade deal if he is pulling out unilaterally of the last trade deal he signed?”

Related: Confidence vote in Johnson matter of ‘when, not if’, says senior Tory