“I trust the British Government to implement the Withdrawal Agreement, an obligation under international law and prerequisite for any future partnership." 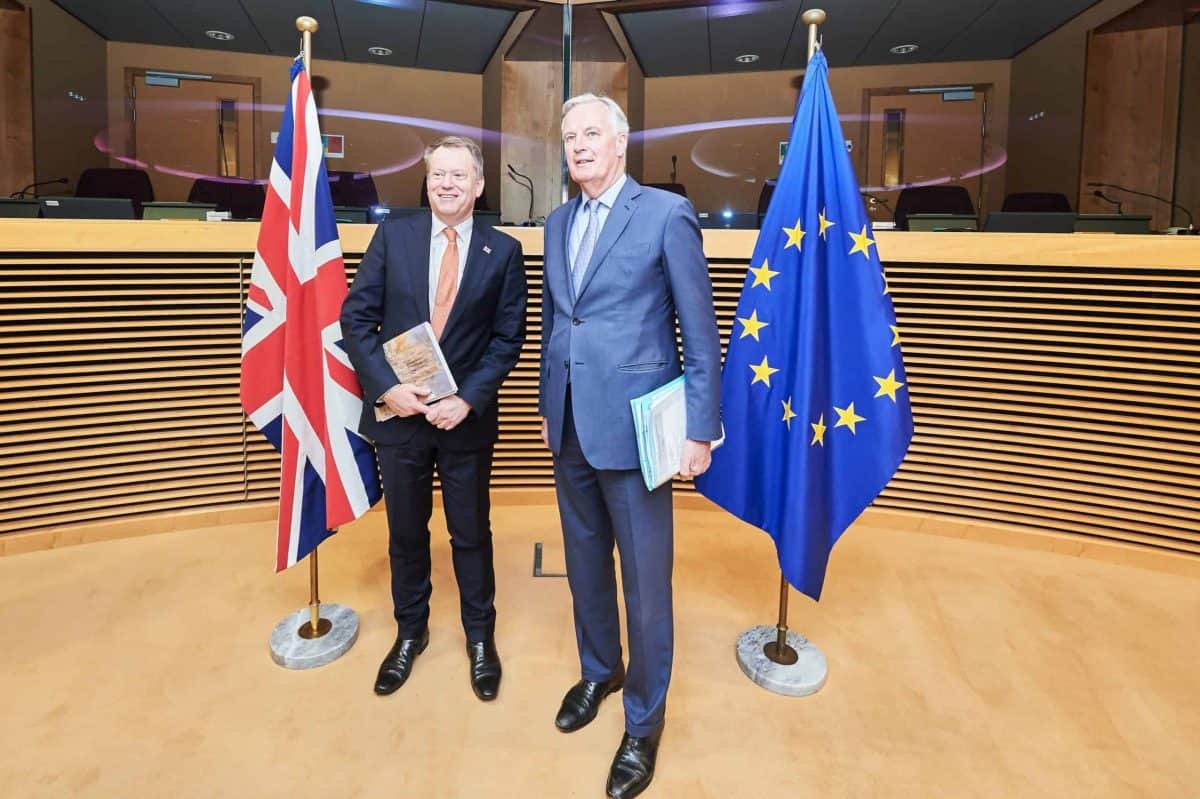 Progress must be made in crunch negotiations this week in order to broker a deal in time for the end of the Brexit transition period, the UK’s chief negotiator has warned his EU counterpart.

Lord Frost called for “more realism” from Brussels as he said the two sides “can no longer afford to go over well-trodden ground” in the deadlocked talks.

The negotiator’s firm words came ahead of him meeting his EU counterpart Michel Barnier for the eighth round of talks beginning in London on Tuesday.

Downing Street has sought to increase pressure on Brussels, with Prime Minister Boris Johnson setting a five-week deadline for trade talks to succeed in time for the transition’s end on December 31.

But talks were set for a collision course over new Brexit legislation which has dismayed senior EU figures who are concerned it could override key elements of the Withdrawal Agreement.

Lord Frost said: “Today, I will sit down with Michel Barnier and drive home our clear message that we must make progress this week if we are to reach an agreement in time.

“We have now been talking for six months and can no longer afford to go over well-trodden ground.

“We need to see more realism from the EU about our status as an independent country.”

He said the UK’s position derives from the “fundamentals of being a sovereign state” and called for the EU to “fully recognise this reality”.

“If they can’t do that in the very limited time, we have left then we will be trading on terms like those the EU has with Australia, and we are ramping up our preparations for the end of the year,” Lord Frost added.

Senior EU figures reacted angrily after it was reported the Government was set to table new legislation which could override key elements of the Withdrawal Agreement that sealed the UK’s departure from the bloc in January.

The Prime Minister’s official spokesman said the Government was proposing “limited clarifications” to the law to ensure ministers can preserve the gains of the Good Friday Agreement in the event of no deal.

The Internal Market Bill to be tabled on Wednesday will ensure goods from Northern Ireland continue to have unfettered access to the UK market while making clear EU state aid rules, which will continue to apply in Northern Ireland, will not apply in the rest of the UK.

In addition, an amendment to the Finance Bill will give ministers the power to designate which goods going from Great Britain to Northern Ireland are considered “at risk” of entering the EU single market and are therefore liable to EU tariffs.

The Prime Minister’s spokesman said discussions were continuing with the EU to resolve the outstanding issues relating to the Northern Ireland protocol, intended to ensure there is no return of a hard border with the Republic once the transition is over.

He said the legislative changes were a necessary “safety net” in the event that they were unable to come to an agreement.

But European Commission president Ursula von der Leyen warned there could be no backtracking by the UK on its previous commitments if it wanted to reach a free trade agreement.

“I trust the British Government to implement the Withdrawal Agreement, an obligation under international law and prerequisite for any future partnership,” she said.

“(The) protocol on Ireland-Northern Ireland is essential to protect peace and stability on the island and integrity of the single market.”

Ireland’s foreign minister Simon Coveney warned that abandoning the agreement would be “a very unwise way to proceed”.

Mr Barnier said he would be seeking clarification about the UK’s plans.

He told French radio that honouring the Withdrawal Agreement was “a pre-condition for confidence between us because everything that has been signed in the past must be respected”.