The President said the video should be released to the public to dissuade al-Baghdadi’s followers. 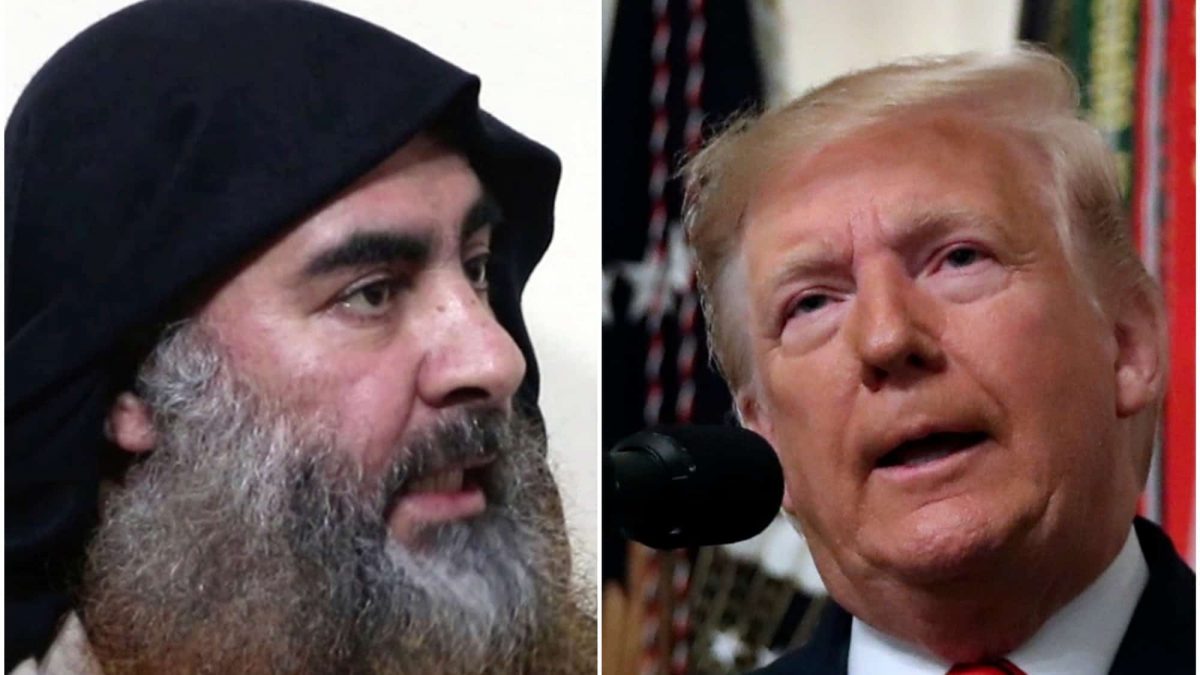 Donald Trump said watching the death of IS leader Abu Bakr al-Baghdadi was “just like watching a movie” after a US raid in Syria killed one of the world’s most wanted men.

The US President said he watched much of the mission unfold from the White House Situation Room on Saturday night, describing the incidents to the public shortly after.

He said the Islamic State leader ran into a dead-end tunnel and ignited an explosive vest, killing himself and three of his young children.

Trump said al-Baghdadi spent his last moments in utter fear and claimed that the IS leader was “whimpering and crying” and died as “a coward, running and crying”.

He said the US received immediate and positive identification on the body and that the world is now a much safer place.

The president said at the White House on Sunday that the US had al-Baghdadi under surveillance for several weeks.

He said that during the raid, US forces flew low and fast, and were met with gunfire at points.

Mr Trump also suggested that the footage of the raid may be released publicly so that the world knows al-Baghdadi spent his final moments “crying”, “whimpering” and “screaming”.

A US official said late on Saturday that al-Baghdadi was targeted in Syria’s north-western Idlib province.

No US forces were killed or injured in the raid, Mr Trump said.

He added that al-Baghdadi’s identity was positively confirmed by a DNA test conducted onsite.

Mr Trump thanked Russia, Turkey, Syria and Iraq, as well as Kurdish fighters in Syria for their support.

The killing of al-Baghdadi marks a significant foreign policy success for Mr Trump, coming at one of the lowest points in his presidency as he is mired in impeachment proceedings and facing widespread Republican condemnation for his Syria policy.

The recent pullback of US troops he ordered from north-eastern Syria raised a storm of bipartisan criticism in Washington that the militant group could regain strength after it had lost vast stretches of territory it had once controlled.

Mr Trump said the troop pullout “had nothing to do with this”.

Planning for the operation began two weeks ago, Mr Trump said, after the US gained unspecified intelligence on al-Baghdadi’s whereabouts.

Eight military helicopters landed at the compound and were met by gunfire, Mr Trump said.

The president vividly described the raid and took extensive questions from reporters.

He said US forces breached the walls of the building because the doors were booby-trapped and chased al-Baghdadi into the tunnel, which partially collapsed after al-Baghdadi detonated the suicide vest.

The president said a military dog was injured by the explosive blast.

Mr Trump said he teased the announcement as soon as American forces landed safely in a third-country.

The Syrian Observatory for Human Rights, a Syria war monitor, reported an attack carried out by a squadron of eight helicopters accompanied by a warplane belonging to the international coalition on positions of the Hurras al-Deen, an al Qaida-linked group, in the Barisha area north of Idlib city, after midnight on Saturday.

Al-Baghdadi’s presence in the village, a few kilometres from the Turkish border, would come as a surprise, even if some IS leaders are believed to have fled to Idlib after losing their last sliver of territory in Syria to US-allied Kurdish forces in March.

The surrounding areas are largely controlled by an IS rival, the al Qaida-linked Hayat Tahrir al-Sham (HTS), although other jihadi groups sympathetic to IS operate there.

Mr Trump said the death of al-Baghdadi shows the United States will continue pursuing other terrorist leaders and that none should rest easy.

“These savage monsters will not escape their fate,” he said, and that the “losers” who worked for al-Baghdadi had “no idea what they were getting into”.

Kurdish forces appeared ready to portray al-Baghdadi’s death as a joint victory for their faltering alliance with the US, weeks after Mr Trump ordered American forces to withdraw from northeastern Syria, all but abandoning Washington’s allies to a wide-ranging Turkish assault.

Al-Baghdadi had led IS for the last five years, presiding over its ascendancy as it cultivated a reputation for beheadings and attracted tens of thousands of followers to a sprawling and self-styled caliphate in Iraq and Syria.

He remained among the few IS commanders still at large despite multiple claims in recent years about his death and even as his so-called caliphate dramatically shrank, with many supporters who joined the cause either imprisoned or jailed.

His exhortations were instrumental in inspiring terrorist attacks in the heart of Europe and in the United States.

Shifting away from the airline hijackings and other mass casualty attacks that came to define al Qaida, al-Baghdadi and other IS leaders supported smaller-scale acts of violence that would be harder for law enforcement to prepare for and prevent.

Related: Labour MP offers to sit down and talk to vandals who painted ‘gay slur’ on office