Trump said Putin had responded to the "weakness and incompetence and stupidity" of the Biden administration. 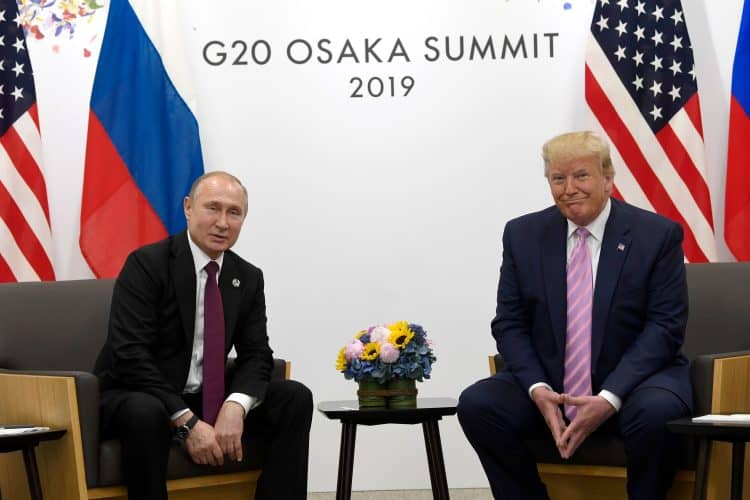 Donald Trump once more praised Vladimir Putin as “smart” in an appearance on Fox News moments after Russia announced a military operation in Ukraine – and blamed the invasion on a “rigged election”.

On Thursday morning, Putin said he would conduct a “special military operation” in eastern Europe – with gunfire and explosions heard across Ukraine, including the capital Kyiv, moments later.

Discussing developments with Fox News presenter Laura Ingraham, Trump suggested that Moscow’s gambit was due to the results of the 2020 presidential election in the US – which he has long claimed to have been rigged in Joe Biden’s favour.

‘Because of a rigged election’

“He [Putin] was going to be satisfied with a piece and now he sees the weakness and the incompetence and the stupidity of this administration,” he said.

“As an American I am angry about it and I am saddened by it. And it all happened because of a rigged election,” Trump added.

The former president claimed the invasion of Ukraine would never have happened otherwise.

“That includes inflation and that includes millions of people pouring in on a monthly basis, far more than 3 million people,” Trump said.

“And they are coming from a 129 different countries and we have no idea what is happening. And they are destroying our country.”

It comes days after Trump again blamed Biden’s victory for Russia’s aggression. “What went wrong was a rigged election and what went wrong is a candidate that shouldn’t be there and a man that has no concept of what he’s doing,” he told a conservative radio show on Tuesday.

He added: “I went in yesterday and there was a television screen, and I said, ‘This is genius.’ Putin declares a big portion of the Ukraine—of Ukraine. Putin declares it as independent. Oh, that’s wonderful. So, Putin is now saying, ‘It’s independent,’ a large section of Ukraine. I said, ‘How smart is that?’ And he’s gonna go in and be a peacekeeper.”

In another clip from an event at his Mar-a-Lago club in Florida, which circulated on Wednesday night, Trump can once more be heard praising the Kremlin’s moves as “smart”.

He can be heard saying: “Trump said Putin is smart. He’s taken over a country for $2 worth of sanctions. I’d say that’s pretty smart.

“He’s taking over a country – a vast, vast location, a great piece of land with a lot of people – just walking right in. This never would have happened and I know him very well.”

“As a matter of policy, we try not to take advice from anyone who praises President Putin and his military strategy, which I believe is what happened there,” she said.