A subsidiary of the Trump Organisation tasked with overseeing a high-end helicopter charter service has quietly shipped back a multimillion pound Sikorsky helicopter to the US amid falling demand and “anger” at the Trump brand. 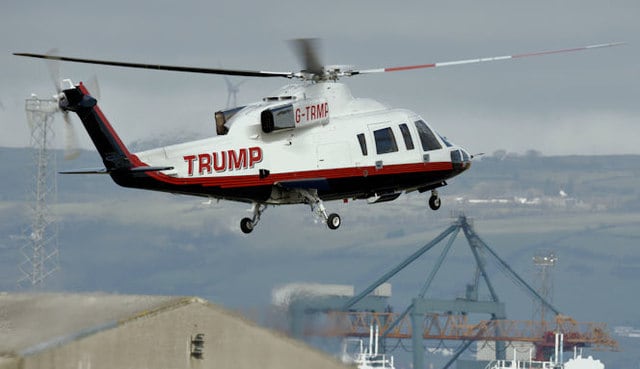 A luxury Trump-branded helicopter flown in to the President’s Scottish resorts to woo high flyers has returned home after demand slumped.

Billed as an “incredible” way to tour his golf courses and surrounding areas, Mr Trump made his Sikorsky S-76B available for luxury helicopter charters.

The fees reached as much as £15,000 for a “couple of hours”, but it wasn’t just the exuberant costs that left it grounded.

Anger at the Trump brand

According to The Scotsman a subsidiary of the Trump Organisation tasked with overseeing a high-end helicopter charter service has quietly shipped back a multimillion pound Sikorsky helicopter to the US amid falling demand and “anger” at the Trump brand.

The director of a charter company which operated the helicopter on the Trump Organisation’s behalf told the Scottish newspaper that custom suffered after Mr Trump became president.

“In America, Trump is a brand,” he explained. “Obviously over here, it’s the focus of people’s anger, sometimes, so we operated with or without the name.”

The decision to export the S-76B back to the US – where the rest of Mr Trump’s ageing air fleet is based – followed a short-lived stint in the UK.

One director said he never flew with the ‘TRUMP’ name visible, reasoning that it would have turned off potential customers.

The Sikorsky was first shipped to Scotland via Liverpool’s Seaforth Docks in June 2014, just two months after Mr Trump’s purchase of Turnberry, the historic hotel and golf course.

But records compiled by the Civil Aviation Authority, the UK’s independent aviation regulator, show that the helicopter has been deregistered from its database.

Transferred to another country

Under the note sections of the entry, it states: “Transferred to another country or authority. UNITED STATES OF AMERICA.”

Companies House records show its most recent profit and loss reserves stood at a negative of £967,000.