David Lammy hit out at "another stomach-turning case of Tory sleaze". 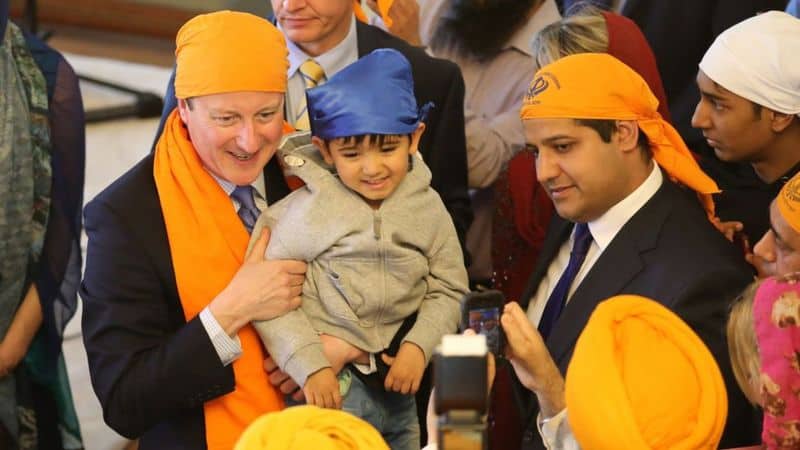 Samir Jassal (right) with David Cameron on a visit to a Sikh place of worship in Kent, 2015

A former Tory parliamentary candidate and party donor who signed a £100 million government deal to purchase PPE has been umasked by an admin error.

The lucrative deal for face masks was signed in July – but the names of those involved were blacked out when the contract was eventually published seven months later.

However a second document listed Samir Jassal – an ex-councillor who has campaigned alongside Boris Johnson – as the supplier’s contact.

The government has repeatedly claimed ministers play no part in deciding who gets contracts – but Labour’s David Lammy described the case as “another stomach-turning story of Tory sleaze”.

Despite the deal being signed last year, the details only emerged in March after a court rebuked the government for failing to publish contracts within the legal time frame; Matt Hancock, the health secretary, was judged to have acted unlawfully.

When the deal involving Jassal was published, the contact details for the supplier were redacted; but, in what appears to have been a clerical error, a separate document published alongside the contract gives Jassal’s name as the “suppler’s contact” to Pharmaceuticals Direct Limited (PDL), the company paid to supply the masks.

Jassal told the BBC that he was a consultant for the firm.

A £100m+ PPE contract handed to a former Tory candidate, donor and ex-councillor without any competition.

Another morning, another stomach-turning story of Tory sleaze.https://t.co/ufwQG3eRPr

The contract was negotiated after the first wave of the coronavirus pandemic devastated the UK, with the government still scrambling to secure adequate PPE – and using emergency powers, suspending the tendering process, to do so.

Jassal is a former Tory party candidate who joined Johnson on an official trip to a west London recycling plant last October – and accompanied him on a campaign visit to a Sikh temple in the 2019 general election.

He stood as a Conservative candidate in two general elections – and is standing as a councillor again in Gravesham Borough Council in next month’s local elections.

According to his LinkedIn profile, he worked as an unpaid adviser to Priti Patel – now home secretary – between 2014 and 2015, and describes her as a “good friend” on social media. He donated £4,000 to the Tories in 2016.

Jassal’s involvement in the £100 million contract was uncovered by the Good Law Project, a campaign group which took the government to court for not publishing PPE contracts.

The first lockdown ended in June. How can we still have needed PPE so urgently as to award a vast £100m+ PPE contract without any competition in July? Could it have something to do with close links to Number 10? https://t.co/rna87Z4EhI

Jassal claims PDL has 20 years’ experience in the healthcare sector, and has supplied PPE to various outlets for many years – but, despite the lucrative contract, at least two hospital trusts have recorded issues with the masks supplied.

Nonetheless, Jassal said the masks “successfully entered the NHS supply chain in a timely manner” and they met “all technical standards which were rigorously vetted and approved by the Health and Safety Executive, the DHSC and the NHS”.

A Department of Health spokesperson said: “The first duty of any government in a national crisis is to protect the public and save lives, and to do that when confronted with this global pandemic we had to rapidly procure and produce PPE.

“This involved setting up a new logistics network from scratch and expanding our PPE supply chain from 226 NHS Trusts in England to more than 58,000 different settings, all of which was taking place at a time when global demand was greater than ever before.

“All PPE procurement went through the same assurance process. Due diligence has been carried out on every contract and Ministers have no involvement in deciding who is awarded contracts.”