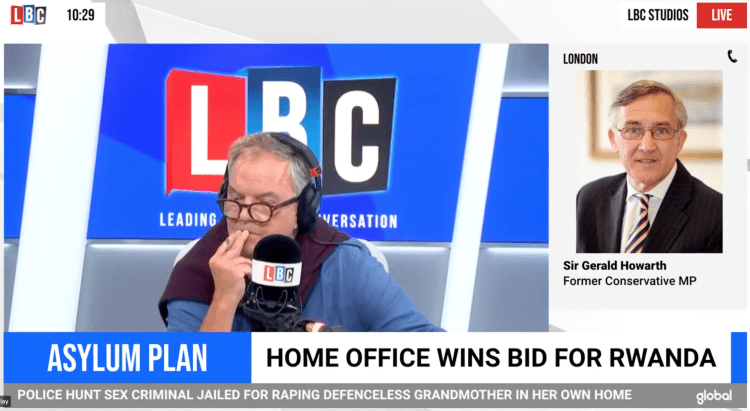 An ex-Tory MP has claimed Ukrainian refugees are “different” from other refugees, in an eyebrow-raising appearance on LBC.

Speaking about the government’s much-criticised Rwanda plan, which will see some illegal immigrants offshored to apply for asylum there, Sir Gerald Howarth said Ukrainian refugees don’t “come here and tell us to pull down our statues and rewrite our history”.

Other refugees, he continued, are mostly “economic migrants”.

Sir Gerald said: “It is already costing us an absolute fortune to house these people in this country as they come across the channel so you have to offset the cost of that against the cost of going to Rwanda.

“But there is a fundamental difference between the Ukrainian refugees and the others. Ukrainian refugees first and foremost are fully intent on returning to rebuild their country and secondly they don’t come here and tell us to pull down our statues and rewrite our history.”

Watch his offensive intervention below.

Forget the ‘Hummus Crisis’, why not make your own?