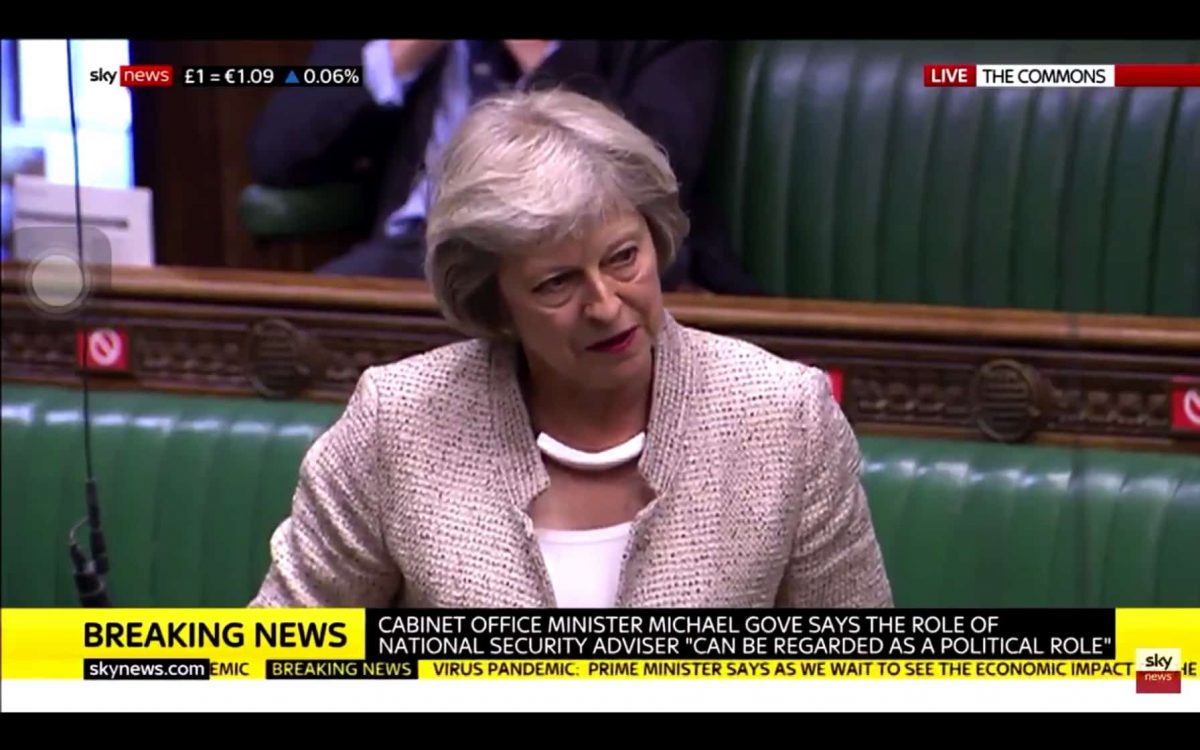 Michael Gove was caught in a war of words with former prime minister Theresa May in parliament today.

The MP for Maidenhead raised concerns over the appointment of David Frost to the post of national security adviser (NSA).

She said: “I served on the national security council for nine years, six years as home secretary and three as prime minister.

“During that time I listened to the expert independent advice from national security advisers.

“On Saturday my right honourable friend said “we must be able to promote those with proven expertise”.

Theresa May is FUMING… the former PM goes for Michael Gove pic.twitter.com/FWnTxY1zwO

Downing Street was forced to defend the appointment of Boris Johnson’ chief EU negotiator to the key post of NSA this weekend.

“I’m worried about the appointment of David Frost as national security adviser because I’m not quite sure how putting a special adviser in that role works,” he told the BBC Radio 4 Today programme.

Downing Street, however, insisted such appointments were not unusual in other countries and that Mr Frost – who has the status of an ambassador – had spent 25 years as a diplomat in the Foreign Office before leaving in 2013.

“It is not unusual in other countries for ambassadors to serve as national security advisers and ambassadors can be political appointees. David Frost has the status of an ambassador.

“The First Civil Service Commissioner has agreed the appointment. That is consistent with the Constitutional Reform and Governance Act.”

Meanwhile, Mr Johnson sought to play down claims that Sir Mark’s position had been undermined by a series of hostile press briefings.

Mr Cummings was reported to have been unimpressed by the response of the Cabinet Office to the coronavirus outbreak, telling aides a “hard rain is coming” for the Civil Service.

Speaking during a visit to a school in west London, Mr Johnson insisted that Sir Mark – who will continue to be involved in the preparations for the UK taking on the presidency of the G7 next year – still had “a lot to offer”.

He sought to play down claims that he had been deliberately undermined through hostile press briefings, making his position impossible.

“I try not to read too much of the negative briefing,” he said.

“There is an awful lot of stuff that comes out in the papers to which I wouldn’t automatically attach the utmost credence.”

Why in the middle of a pandemic?

However, Labour leader Sir Keir Starmer said that it was “obvious” that the Prime Minister was determined to get rid of Sir Mark.

“Why you do so in the middle of a pandemic and a crisis instead of actually focusing on the crisis, is a question the Prime Minister needs to answer,” he told Sky News.

Related: PM trying to ‘hoodwink’ voters as he compares himself to Roosevelt