In a blistering attack in the first PMQ’s after the summer break, PM Theresa May was accused of turning Brexit into a power grab by – HER OWN Conservative MP Anna Soubry. Nottinghamshire Conservative MP Soubry, who has previously very publicly spoken out against Brexit, immediately stated her ‘very serious concerns’. Soubry, who has always […]

by Charles Hibbert
in News, Politics 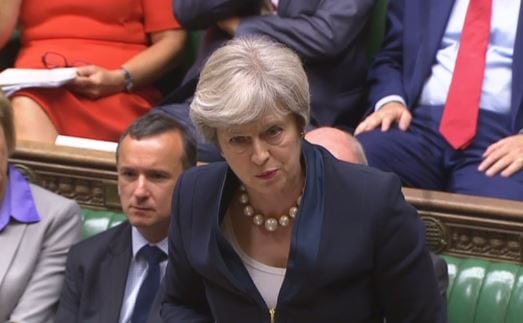 In a blistering attack in the first PMQ’s after the summer break, PM Theresa May was accused of turning Brexit into a power grab by – HER OWN Conservative MP Anna Soubry.

Soubry, who has always stuck to her guns as a vociferous remainer, was given the first question of Prime Ministers Questions – traditionally an easy question from an ally designed to flatter the PM. Instead a fractious PMQ’s began with friendly fire for Theresa May, already looking like a lame duck Prime Minister after a summer of feverish briefings and speculations about her leadership.

“As part of the process of leaving the European Union, it is imperative that we transfer existing EU laws, regulations, directives and the rest, into substantive British law,” Soubry began. “But there are concerns, very serious concerns, along these benches, about the means, not the ends of the EU withdrawal bill.”

The veteran Tory MP for Broxtowe sought answers from the PM about increasing fears that there will be no parliamentary democratic scrutiny for decades of legislation and rights that Theresa May will replace with her own laws. “Could my right honourable friend assure me that she will look in particular at those amendments that seek to change the EU withdrawal bill, so that it doesn’t become an unprecedented and unnecessary government power grab.”

Prime Minister May, responded by saying that she would happily meet with her, while also making it clear that Soubry will be supporting the PM with Britain’s EU exit.

May insisted: “like me, she wants to see an orderly exit from the European Union, and will be supporting this bill, which enables us not just to leave the EU, but to do so in an orderly manner, with a functioning statute book.”

Anna Soubry’s unprecedented PMQ’s ambush of Theresa May follows her warning this week that Conservative MP’s who have serious worries about the European Union (Withdrawal) Bill setting the UK up for a massive power grab by the government are being bullied by the Tory whips.

“We lost our majority, so everything has changed, and one of the reasons I think we lost our majority was because of that rather silly, foolish, bullish attitude,” Soubry told the BBC’s Today Programme. “There is nothing weird, and there is certainly nothing treacherous, about putting down amendments and then speaking to them and indeed voting on them. It’s called democracy.”

Labour have also warned that they will not give the bill an easy ride through parliament, Brexit Shadow Minister Keir Starmer insisting: “I have been very, very clear – while we accept the result of the referendum we are not giving a blank cheque to the government to do it in whichever way it wants because it is not in the public interest.”

“I have been very, very clear – while we accept the result of the referendum we are not giving a blank cheque to the government to do it in whichever way it wants because it is not in the public interest.”-Watch Labour #Brexit Shadow Minister Keir Starmer draw the battle lines for the Brexit #RepealBill and issue a stark warning on the dangers of Theresa May grabbing “sweeping powers" to redraft decades of EU legislation with no democratic parliamentary scrutiny. And explain to BBC's Andrew Marr Labour’s U-turn to fight a devastating #HardBrexit "cliff edge" over the Northern Ireland borders and access to the Single Market and Customs Union:

Posted by The London Economic on Sunday, 3 September 2017

And human rights watchdogs Amnesty International and Liberty called on MP’s from both sides of the House of Commons to amend the Bill to include a binding commitment on the Government to prevent it eroding Brits’ rights.

“This law will affect everybody in the UK – you, your parents, your children – for generations to come. Ministers saying ‘trust us’ just is not enough when the stakes are this high. Surely the Government can’t oppose one simple amendment to stop them taking away our rights?” said Liberty’s Corey Stoughton. “People voted to leave the EU – not lose their rights.”

“As it is, the Withdrawal Bill would see Parliament surrender broad power to Ministers to change laws without proper scrutiny, setting a dangerous precedent. Parliament would be less sovereign and that cannot be right,” added Rachel Logan, Law and Programme Director at Amnesty International UK. “We cannot stand idly by and risk Ministers using cloak and dagger tactics in the future to roll back rights and equality protections that are in place to defend us all.”

“Sovereignty” was a cornerstone of the campaign to leave the EU. If Theresa May is hoping for a “power grab” of our rights and laws enshrined in EU membership, as Anna Soubry MP warned today, she will clearly not only face a bruising battle with the opposition benches, but her own MP’s.