The deal would help Sturgeon to outvote anti-independence parties in Holyrood and burnish her green credentials ahead of Cop26. 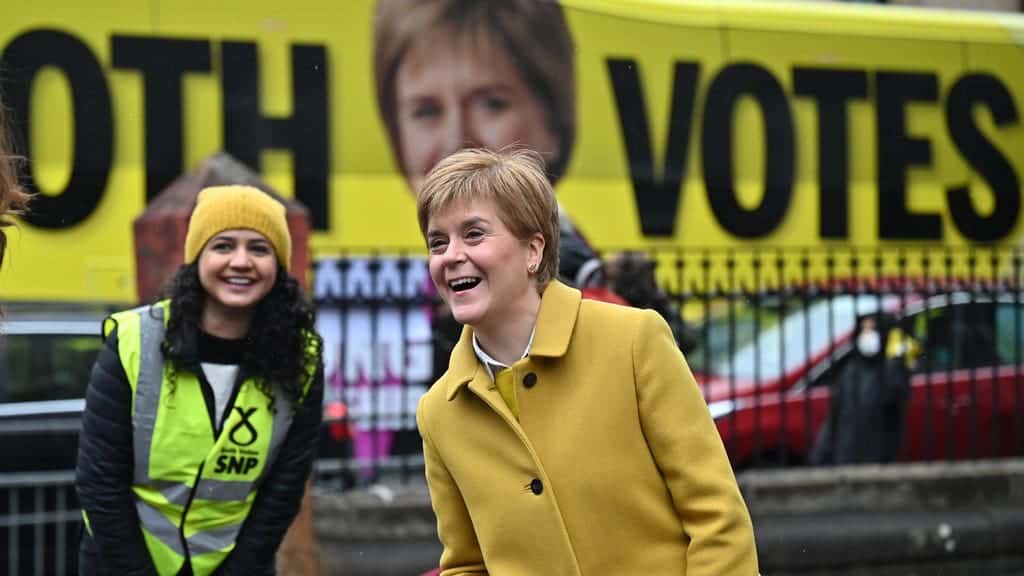 Nicola Sturgeon is poised to strike a deal with the Scottish Greens that would cement a pro-independence majority at Holyrood.

According to the Guardian, a cooperation agreement – which could see the Greens take ministerial seats – is close to finalised, and may be put to Sturgeon’s cabinet as early as next week.

The deal falls short go the full coalition agreement agreed by David Cameron’s Conservatives and the Liberal Democrats under Nick Clegg in 2010, but would give the Scottish National Party and the Scottish Greens a clear majority of Holyrood seats.

It would enable Sturgeon to outvote anti-independence parties in Holyrood, and would burnish the first minister’s green credentials ahead of the Cop26 climate talks in Glasgow this November.

Sturgeon currently leads a minority government after the SNP fell one seat short of an outright majority in May’s elections; the pro-independence Greens hold seven seats.

A source told the Guardian that both sides were “95 per cent there”, with key policy discussions on spending, climate and local government close to being agreed.

The prospective deal poses a challenge for Scottish Labour, as it removes Sturgeon’s need to seek the party’s support to move policies through the devolved parliament.

In an interview on the weekend, Michael Gove, the Cabinet Office minister, said that “the principle that the people of Scotland, in the right circumstances, can ask that question again is there”.

Recent opinion polls suggest support for independence has again fallen below 50 per cent – partly due to public support for the UK government’s vaccination effort.

Sturgeon announced on Tuesday that most remaining Covid restrictions are to be scrapped in Scotland from Monday – but the legal requirement to wear face coverings in some settings will remain.

The First Minister told MSPs in a virtual sitting of the Scottish Parliament that the country could move beyond Level 0 – the lowest level of a five tier system of restrictions in Scotland – due to the “steady decline in cases” and “the success of vaccination”.

Sturgeon said most of the remaining legally imposed restrictions – including on physical distancing and limits to the size of social gatherings – would be lifted, allowing large-scale events to take place.

But she said the legal requirement to wear face mask will remain for “some time to come”. Contact tracing of positive cases will remain, pubs and restaurants must continue to collect customer details and home working will continue to be advised.

She said her government was considering “very carefully the possible, albeit limited, use of Covid status certification for access to certain higher risk venues in future”.

From Monday, close contacts of those who test positive for Covid will no longer be required to automatically self-isolate for 10 days.

Sturgeon said: “However, while this move will restore a substantial degree of normality, it is important to be clear that it does not signal the end of the pandemic or a return to life exactly as we knew it before Covid struck.

“Declaring freedom from, or victory over, this virus is premature.”

Related: Sunak urges young people to office… but just 25% of civil servants are back in Whitehall