"I simple refuse to accept Britain can't be governed better than this," Sir Keir said on Thursday. 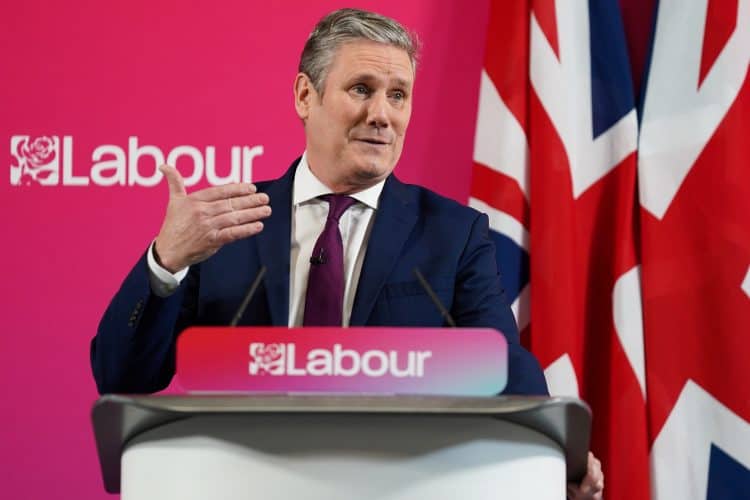 Keir Starmer has accused Boris Johnson of degrading democracy by seeking to “devalue the rules so they don’t matter to anyone anymore”.

Hitting out at the government for being too preoccupied with the Partygate fallout to navigate the looming cost-of-living crisis, the Labour leader said ministers were “intent on saving themselves, not serving the country” – and pointed the finger at Johnson’s “repeated lies from the dispatch box”.

After it emerged that a dozen Downing Street parties are being investigated by the Metropolitan Police, Sir Keir said No 10 was “in paralysis”.

“I shouldn’t have to pledge to honour these principles but, sadly, I feel I do,” he said.

“It isn’t that the prime minister thinks the rules don’t apply. He absolutely knows that they do.

“His strategy is to devalue the rules so they don’t matter to anyone anymore. So that politics becomes contaminated. Cynicism and alienation replace confidence and trust. So that the taunt “politicians are just in it for themselves” becomes accepted wisdom.

“But I’m not going to play the prime minister’s game. I simply refuse to accept that Britain can’t be governed better than this.”

It comes as Johnson insisted he has no plans to quit despite mounting dissatisfaction with his leadership from his own MPs.

The scandal-ridden prime minister batted away calls for his resignation and confirmed he will seek reelection in 2024, telling The Sun: “I’ve got a lot more to do.”

Despite a thirteenth Conservative MP publicly calling for him to quit on Wednesday, Johnson insisted he as “certainly not” finished.

“I am getting on with the job and I will do so for as long as I have the privilege and honour to serve in this position,” he said.

But the prime minister was unable to explain why his popularity has plummeted in recent months.

“I make no commentary but I am focussed on the next election,” he told the newspaper, added that the government was “remorselessly” focussed on “the job in hand”.

Johnson’s defiance comes after five Tory MPs called for his head in the space of 24 hours.

Related: Boris Johnson: ‘I want to be Prime Minister for a decade’