Ian Blackford told Johnson he was facing "a moment of moral reckoning" - and told him to resign. 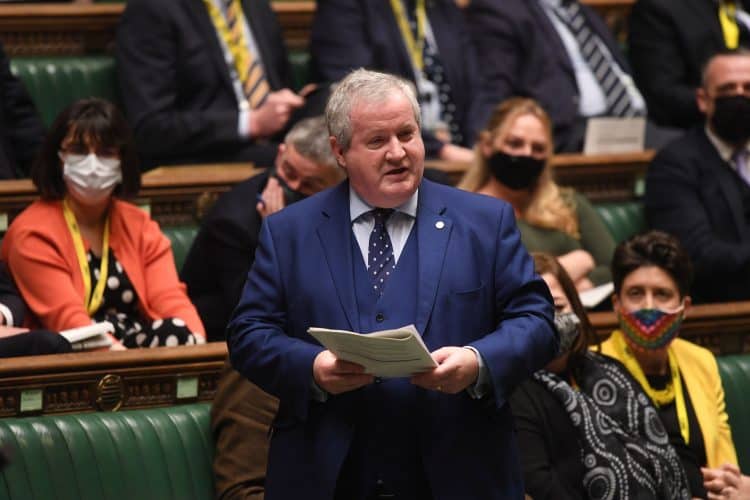 Boris Johnson has been told to resign over an outlawed Christmas party which allegedly took place in Downing Street while Britain was in lockdown last year.

Addressing the scandal at Prime Minister’s Questions, the SNP’s Westminster leader Ian Blackford said Johnson was facing “a moment of moral reckoning” – and should either quit or be deposed by the Tory party.

“Downing Street wilfully broke the rules and mocked the sacrifices we have all made, shattering the public’s trust,” he said.

“The prime minister is responsible for losing the trust of the people. He can no longer lead on the most pressing issue facing these islands.

“The prime minister has a duty. The only right and moral choice left to him: it is for his resignation. When can we expect it?”

Johnson rebuffed Blackford’s call, telling MPs: “I am going to get on with the job and I believe that is what is the right thing to do.”

The prime minister accused the opposition of trying to “muddy the waters of events that took place a year ago”, to which Blackford responded that he had seen “no dignity from a prime minister that quite simply just doesn’t get it.”

“It is clear that this prime minister desperately is clinging onto power and I have nothing left to say to a man whose replies we simply cannot trust … If he doesn’t resign then he simply must be removed,” he said.

In a heated session Johnson said he had ordered an investigation into claims Downing Street staff broke lockdown rules by holding a Christmas party last year and told MPs he was “furious” about footage apparently showing aides joking about it.

He apologised “unreservedly” for the offence caused by the footage of his then-spokeswoman Allegra Stratton at a mock press conference.

Johnson said he had asked Cabinet Secretary Simon Case “to establish all the facts and to report back as soon as possible – and it goes without saying that if those rules were broken then there will be disciplinary action for all those involved”.

“Millions of people now think the prime minister was taking them for fools, that they were lied to. They are right aren’t they?”